BOSTON - Two wealthy parents were convicted Friday of buying their kids’ way into school as athletic recruits in the first case to go to trial in the college admissions cheating scandal that embroiled prestigious universities across the country.

Gamal Abdelaziz, a former casino executive, and John Wilson, a former Staples Inc. executive, were found guilty after about 10 hours of deliberations in the case that exposed a scheme to get undeserving applicants into college by falsely portraying them as star athletes. 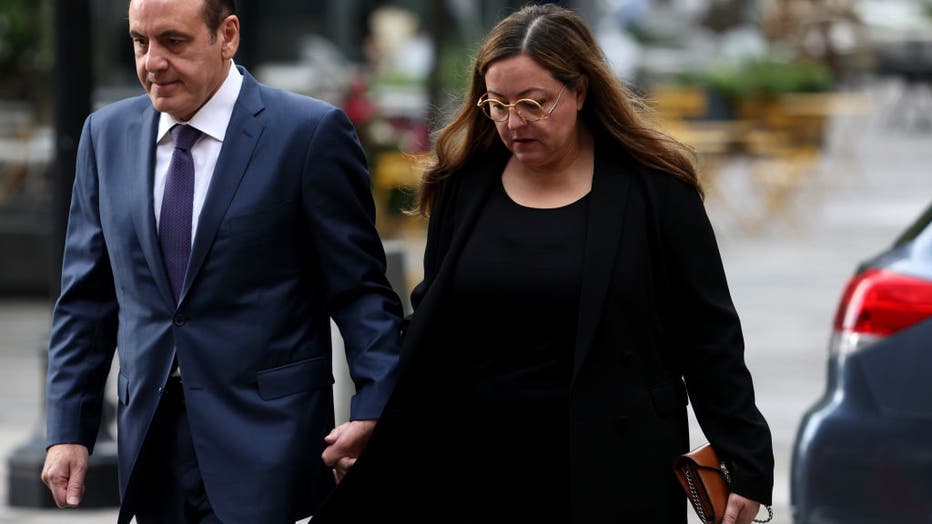 Boston, MA - September 13: Gamal Abdelaziz, 64, of Las Vegas, (L) a defendant in the Varsity Blues case makes his way into court for opening statements in the first Varsity Blues case to go to trial in Boston on Sept. 13, 2021. (Photo by Jessica Rina

Abdelaziz, of Las Vegas, was charged with paying $300,000 to get his daughter into the University of Southern California as a basketball recruit even though she didn’t even make it onto her high school’s varsity team. Wilson, who heads a Massachusetts private equity firm, was accused of paying $220,000 to have his son designated as a USC water polo recruit and an additional $1 million to buy his twin daughters’ ways into Harvard and Stanford.

They are to be sentenced in February.

They are among nearly 60 people charged in the investigation dubbed by authorities as "Operation Varsity Blues" that also ensnared athletic coaches at such prestigious schools as Georgetown and Yale. Other parents were accused of paying hefty bribes to have people cheat on their kids’ entrance exams.

Lawyers for Abdelaziz and Wilson argued they believed their payments were legitimate donations and pointed the finger at the admissions consultant at the center of the scheme, Rick Singer. The parents insisted they had no idea that Singer was using their money as bribes and was falsifying or exaggerating athletic credentials on behalf of their kids.

At the center of the case were a series of secretly recorded phone calls between Singer and the parents that prosecutors said proved Abdelaziz and Wilson were in on the scheme. The FBI wiretapped Singer’s calls and then convinced the admissions consultant to begin cooperating with investigators in 2018 in the hopes of getting a lighter sentence. Singer has pleaded guilty to a slew of charges, including money laundering conspiracy, and has yet to be sentenced.

In one call, Wilson asked Singer which sports "would be best" for his twin daughters. Singer responded that it "doesn’t matter" and that he would "make them a sailor or something" because Wilson lives on Cape Cod.

Wilson laughed and asked: "Is there a two-for-one special? If you got twins?"

In another call, Singer told Abdelaziz that Donna Heinel, former senior associate athletic director at USC, told him Abdelaziz’s daughter’s fake athletic profile was so well done that she wanted him to use that profile going forward for "anybody who isn’t a real basketball player that’s a female."

"I love it," Abdelaziz responded.

The defense sought to poke holes in the government’s case by questioning why they chose not to call Singer to the stand. Abdelaziz and Wilson’s lawyers portrayed Singer as a con man who manipulated the parents and assured them his so-called side-door scheme was legitimate and endorsed by the schools.

Wilson and Abdelaziz were both convicted of fraud and bribery conspiracy charges. Wilson was also convicted of additional charges of bribery, wire fraud and filing a false tax return.

The sprawling Varsity Blues case has been prosecuted out of Boston since authorities there began investigating the scheme years ago, thanks to a tip from an executive targeted in a securities fraud probe.