The Massachusetts resident humbly received his eight medals for valor at a special ceremony on Monday where he was surrounded by friends, family and veterans of other wars.

Fantasia served as an Army medic with the Lima Company, of the 104th Regiment, of the 26th Infantry Division, commonly known as the “Yankee Division,” according to The Valley Patriot.

In 1944, Fantasia was tending to two of his wounded comrades in France when he was cornered by the Nazis’ 11th Panzer Division. Fantasia was sent to a POW camp until he was liberated by Russian forces six months later on April 28, 1945. 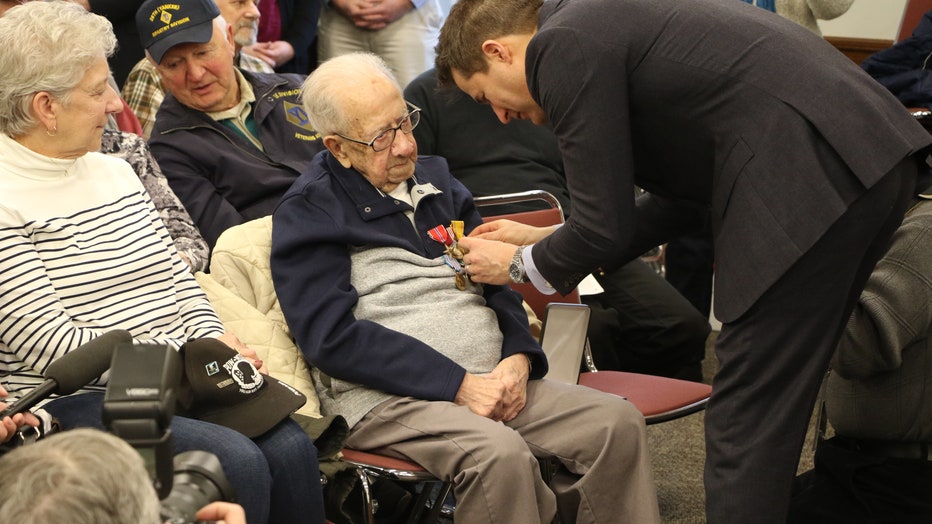 Rep. Seth Moulton pins one of the medals on the chest of World War II veteran Peter Fantasia during a special ceremony. (Courtesy of)

“For 80 years after he came home he just lived his life, never bragging about what he did or asking for recognition, not even asking for the medals he had rightly earned,” said Rep. Seth Moulton, who presented Fantasia with the honor in a special ceremony held on Monday.

Among the honors bestowed on Fantasia was a Silver Star, the nation’s third-highest award for valor in combat. It was pinned on the chest of the humble war hero.

“God has been good. I don’t know what to say,” Fantasia told WHDH in an interview during the ceremony.

“He is a true example to the rest of the country and the community what American heroism is all about,” Moulton said.