Check out some of the most interesting and notable record-low temperatures around the country.

As an arctic blast is set to bring bitterly cold temperatures to much of the U.S. through Christmas weekend, you might be wondering how low the temperature has ever gotten in your state.

All but one of the 50 states have documented a temperature below zero, with Hawaii being the sole outlier having only dipped as low as 12 degrees. Nearly a dozen states have plunged to minus 50 degrees or colder.

The map below shows the all-time record low in each state, according to data from NOAA's National Centers for Environmental Information. 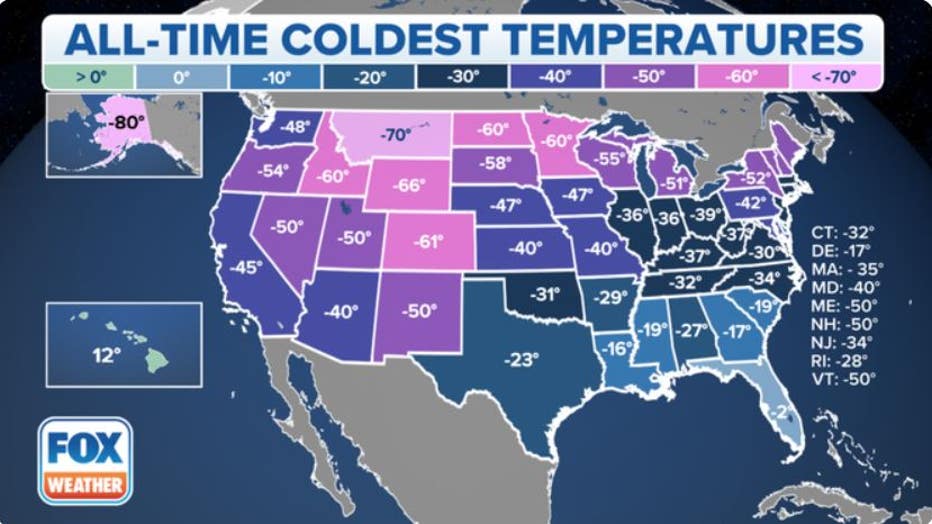 The all-time record low in each state is denoted on the map. (Data: NOAA/NCEI) (FOX Weather)

January and February comprise the coldest time of the year for the majority of the U.S., so it should come as no surprise that's when most of the all-time records were achieved. However, there are a few exceptions to the rule.

WHEN IS THE COLDEST TIME OF YEAR?

Meanwhile, Hawaii's all-time record low wasn't even achieved during the winter. The Mauna Kea Observatory, at an elevation of 13,796 feet on the Big Island of Hawaii, dipped to 12 degrees on May 17, 1979.

The lowest temperature ever recorded in the U.S. was minus 80 degrees in Prospect Creek, Alaska, north of Fairbanks, on Jan. 23, 1971.

HOW COLD CAN TEMPERATURES GET DURING THE COLDEST TIME OF YEAR?

Illinois is the most recent state to reach its lowest temperature on record. Mount Carroll, in the northwestern corner of the state, plunged to minus 38 degrees on Jan. 31, 2019.

The longest-standing record in the U.S. is held by Mount Washington, New Hampshire – the highest mountain in the Northeast – where the temperature bottomed out at minus 50 degrees nearly 140 years ago, on Jan. 22, 1885. 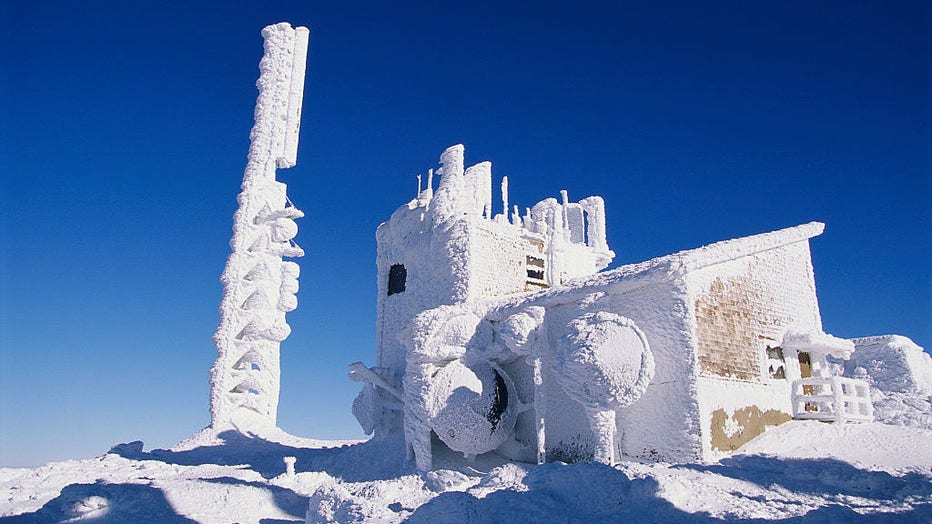 An observatory is covered with heavy snow atop Mount Washington in the White Mountains of New Hampshire. (Photo by Christopher J. Morris/CORBIS/Corbis via Getty Images)

In the Northeast, New York can claim the coldest temperature ever recorded in the region, with an all-time record low of minus 52 degrees set in Old Forge on Feb. 18, 1979. Vermont, New Hampshire and Maine all share the same record of minus 50 degrees.

All-time records in the South might be colder than you think. Georgia, Mississippi, Louisiana and South Carolina have all dipped into the teens below zero, while Alabama has been as cold as minus 27 degrees and Tennessee as low as minus 32 degrees.

The Midwest has a large range of low-temperature records, with North Dakota and Minnesota claiming minus 60 degrees as their all-time record lows, but states south of the Great Lakes such as Illinois, Indiana and Ohio have only dropped into the minus 30s due to winds off the lakes keeping temperatures relatively higher.

Most of the all-time record lows in the Western states were documented in the higher elevations. California's record of minus 45 degrees was set in the heart of the Sierra Nevada in Boca, at an elevation of 5,528 feet above sea level, on Jan. 20, 1937. The record low in Arizona was achieved at Hawley Lake, where the temperature plunged to minus 40 degrees at 8,200 feet on Jan. 7, 1971.