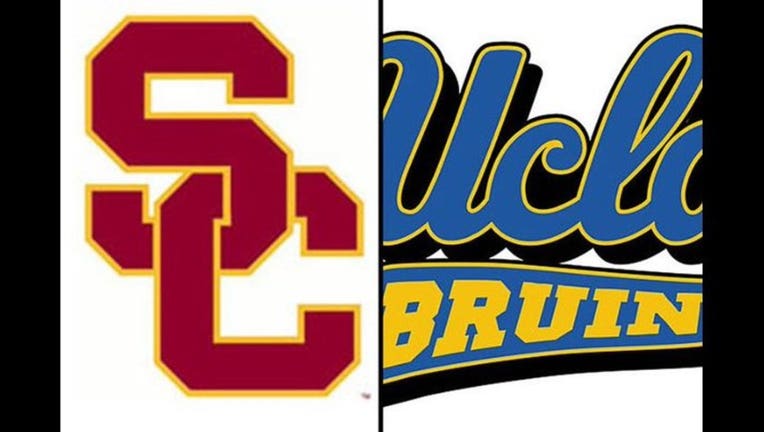 LOS ANGELES (AP) - Cody Kessler threw two touchdown passes and ran for another score, and Southern California clinched the Pac-12 South title with a 40-21 victory over No. 22 UCLA on Saturday in the 85th edition of their crosstown showdown.

Darreus Rogers and Taylor McNamara caught TD passes while the Trojans (8-4, 6-3 Pac-12) scored 20 consecutive points in the second half before raising the Victory Bell in the frenzied Coliseum. USC improved to 5-2 under interim coach Clay Helton and snapped its three-year losing streak in the annual city rivalry game.

USC will face Stanford next Saturday in the Trojans' first trip to the Pac-12 title game.

Paul Perkins rushed for two touchdowns for the Bruins (8-4, 5-4), who lost to USC for the first time in coach Jim Mora's tenure.

Adoree Jackson returned a punt 42 yards for a touchdown shortly before halftime, and Rasheem Green put the Trojans ahead to stay in the third quarter when the freshman defensive lineman returned Josh Rosen's fumble for a 32-yard touchdown.

Rosen passed for 227 yards and his Thomas Duarte for an early TD, but the touted freshman also threw two second-half interceptions to Iman Marshall in his first taste of the L.A. rivalry.

Kessler finally beat UCLA in his final shot, earning a lifelong highlight in the final Coliseum appearance for the Trojans' three-year starter. USC has won five of its last six games to earn a shot at the Pac-12 title despite coach Steve Sarkisian's midseason firing.

Serious injuries and season-long inconsistency finally caught up to UCLA, which lost two of its final three games. The Trojans grinded out 235 yards rushing against the Bruins' beleaguered run defense.

Both teams wore their home jerseys in the revived rivalry tradition on a crisp, clear day at the Coliseum. Kessler sneaked into the end zone to cap an 85-yard USC drive early in the second.

Rosen hit Duarte for a 19-yard TD moments later, but USC's defense finally got pressure on Rosen on consecutive plays deep in UCLA's end late in the first half. Jackson took the ensuing short punt all the way back, showcasing his track-star speed to put the Trojans ahead 20-14.

Perkins' second TD run capped a 78-yard drive shortly after halftime, and UCLA appeared to be taking control until USC's Claude Pelon abruptly jarred the ball loose from Rosen, allowing freshman Green to take it to the house untouched.

Moments later, Marshall picked off a short throw for Rosen's first interception in 245 passes since the Stanford game, the longest interception-free streak in the FBS.