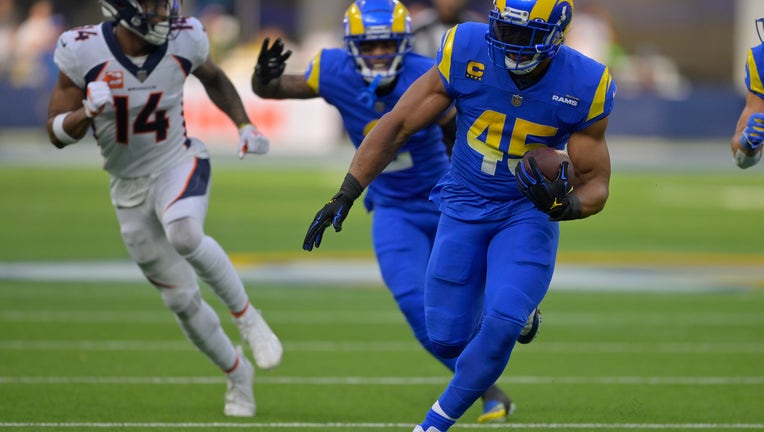 Bobby Wagner #45 of the Los Angeles Rams runs with the ball after catching an interception during the first quarter of the game against the Denver Broncos at SoFi Stadium. (Photo by Jayne Kamin-Oncea/Getty Images) (Getty Images)

Mayfield went 24 of 28 for 230 yards in another standout performance for his second win in three starts with the Rams (5-10), who produced the best game of their dismal season on Christmas.

Rookie Cobie Durant returned his second interception 85 yards for a touchdown with 4:08 left to cap the Rams’ first 50-point performance under Sean McVay since their famed 54-51 victory over Kansas City in 2018.

For at least one more week, Los Angeles avoided becoming the first defending Super Bowl champion to lose 11 games. Even with the NFL’s 32nd-ranked offense coming in, Los Angeles became just the second team to score 50 points in the NFL this season, joining Dallas earlier this month, and put together a comprehensively dominant performance.

In his Los Angeles debut, Larrell Murchison made 2 1/2 of the Rams’ six sacks of Russell Wilson, who passed for 214 yards with three interceptions for Denver (4-11).

The beleaguered Wilson was not sharp in his return from a one-game absence with a concussion, throwing interceptions to end Denver’s first two drives. The second pick was by Bobby Wagner, who faced his longtime teammate and friend for the first time after spending a full decade together in Seattle.

Wagner also sacked Wilson during the first half, when the Rams improbably racked up 261 of their 388 yards before halftime and eventually scored on their first eight drives against Denver’s above-average defense, already matching their full-game season high in points with their 31-6 halftime lead.

Denver trailed 41-6 before Wilson hit Greg Dulcich for the Broncos’ only touchdown with 8:30 to play.

Akers continued his late-season surge by producing the Rams’ first 100-yard rushing game of the season, while Higbee led the passing attack with 94 yards receiving for an offense missing its top three wideouts due to injury.

The Rams led by double digits less than nine minutes in when Durant picked off Wilson’s second pass and Mayfield hit Higbee for a 9-yard TD three plays later. Higbee became the Rams’ career franchise leader in touchdown catches by a tight end with his 19th score.

Wagner then poached a pass from Wilson across the middle of the field and made a long return, and the Rams scored two snaps later on Akers’ 3-yard run. Los Angeles had scored just one touchdown off a takeaway all season long before doing it twice more in the first quarter.

The Rams’ 17-point first quarter was their highest-scoring opening period since Week 6 of McVay’s first season in 2017. They subsequently scored touchdowns on four consecutive drives for the first time in McVay’s tenure.

Higbee made his second TD catch early in the second quarter after a smooth 75-yard drive by the Rams’ long-struggling offense. Akers then punched it in again 1:06 before halftime for a 31-3 lead.

Ramsey picked off Wilson’s long heave to the end zone on Denver’s opening drive of the second half. The Rams’ pressure on Wilson improbably was led by Murchison, who signed with LA 13 days ago after Tennessee cut him.