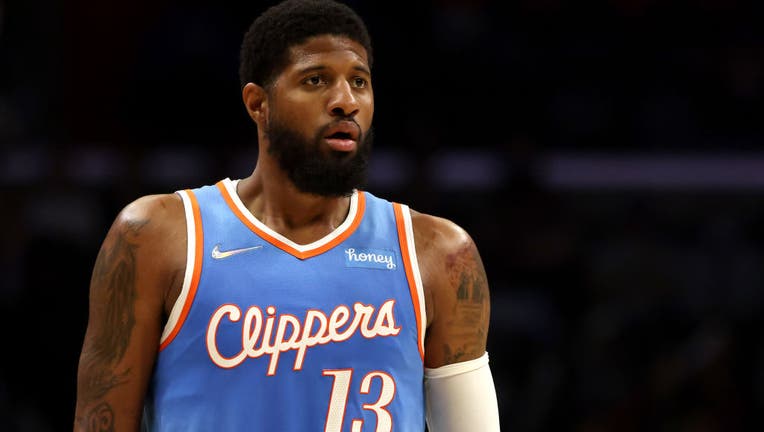 LOS ANGELES, CALIFORNIA - APRIL 09: Paul George #13 of the Los Angeles Clippers looks on during the second half against the Sacramento Kings at Crypto.com Arena on April 09, 2022 in Los Angeles, California. (Photo by Katelyn Mulcahy/Getty Images) (Getty Images)

LOS ANGELES - The Los Angeles Clippers will be without superstar Paul George for the must-win play-in tournament game against New Orleans Friday night.

The NBA star recently returned after he was sidelined for three months due to an injury to his right elbow. In his first game back, he put the league on notice and helped the team overcome a 25-point deficit against Utah, as they continued to gain momentum finishing the regular season.

The Clippers, the eighth seed in the Western Conference, lost against the Timberwolves Tuesday night, and will now have to fight for a spot in the playoffs without its star player, who has missed most of the regular season.

Still, the Clippers have been a surprisingly resilient bunch.

They finished two games above .500 despite not having its other superstar Kawhi Leonard all season. They traded for Norman Powell in February, only to lose him to injury days later. Part of the packaged deal from Portland included the addition of Robert Covington, who has had a seamless transition, consistently bringing energy off the bench as a solid two-way player.

Powell is back in action and the Clippers will continue to fight with their "Next Man Up," mentality.

If Los Angeles can beat the odds and beat the Pelicans, they will face Phoenix in the first round of the NBA playoffs beginning Easter Sunday.

Tip-off is scheduled for 7 p.m. at the Crypto.com Arena in downtown Los Angeles.