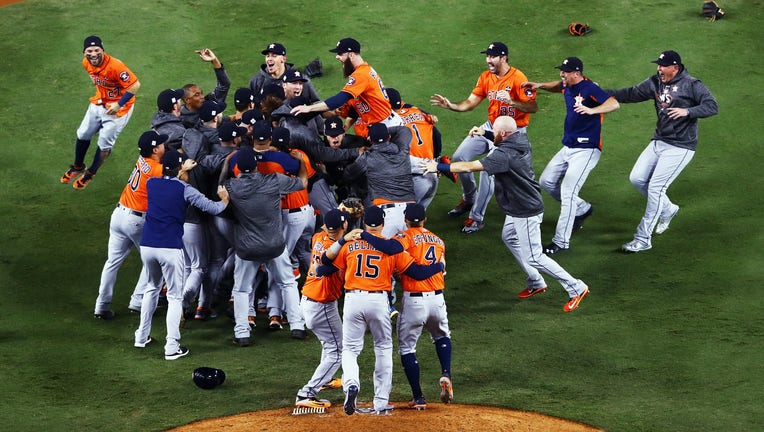 Following the sign-stealing scandal that took Major League Baseball by storm, the Los Angeles City Council voted unanimously to ask the commissioner to reward the Dodgers with the 2017 and 2018 World Series titles after the league handed down major penalties to the Houston Astros and continues to investigate the Boston Red Sox.

MLB Commissioner Rob Manfred, during an exclusive interview with FOX Business’ Maria Bartiromo at the World Economic Forum in Davos, Switzerland, said based on the fact that the league is still investigating the Red Sox, a conclusion has not yet been reached in respect to whether the team will be stripped of its World Series crown.

“It’s a little hard to take the trophy away from somebody who hasn’t yet been found to do something wrong,” he said, and he added that “we don’t know what the outcome of that’s going to be.”

Even so, the MLB hit Houston hard, doling out one-year suspensions for former manager A.J. Hinch and former general manager Jeff Luhnow in addition to a $5 million maximum penalty and the forfeiture of future draft picks. After the fines were announced the Astros fired Hinch and Luhnow.

Nonetheless, Manfred added that no matter what the impact of the sign-stealing, “it’s absolutely unclear that the Dodgers would have been the World Series champions.” Manfred believes that “not trying to change what happened” has been a long withstanding tradition in baseball and “the answer” is to be “transparent about what the investigation showed and let our fans make their own decision.”

However, teams aren’t taking any chances. Shortly after the MLB’s report detailing his role Astros in the investigation, the Red Sox parted ways with manager Alex Cora. The New York Mets also fired Carlos Beltran before he began managing the team.

GET FOX 26 NEWS ON THE GO BY CLICKING HERE

Manfred noted that while “no one likes to see that happen,” he does think it’s the “kind of message that will serve as a deterrent to this behavior going forward.”

In terms of the open probe into the Red Sox, Manfred said that he has told owners that if he has “some credible evidence that any other team was involved they will be investigated with the same thoroughness” as the Astros.