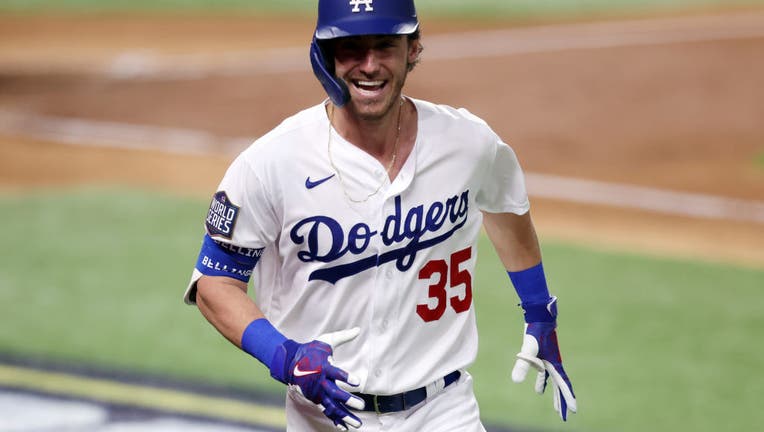 ARLINGTON, TEXAS - OCTOBER 20: Cody Bellinger #35 of the Los Angeles Dodgers celebrates after hitting a two run home run against the Tampa Bay Rays during the fourth inning in Game One of the 2020 MLB World Series at Globe Life Field (Photo by Tom Pe

ARLINGTON, Texas - The bats have come alive for the Los Angeles Dodgers in the team's World Series Game 1 victory over the Tampa Bay Rays.

The LA Dodgers win Game 1 of the World Series on Tuesday night.

The National League champs Dodgers slugged their way to an 8-3 win over the American League pennant-winning Rays Tuesday night.

Cody Bellinger's two-run home run in the bottom of the fourth put Los Angeles on board 2-0.

After Tampa Bay clawed back in the top of the fifth with a solo home run from Rays outfielder Kevin Kiermaier, the Dodgers answered with four runs in the bottom of the fifth to extend their lead to 6-1.

Los Angeles padded their lead to 8-1 after a solo homer from Mookie Betts and an RBI double from Max Muncy in the bottom of the sixth.

The Rays cut the Dodgers' lead to 8-3 with a pair of runs at the top of the seventh inning.

Longtime ace Clayton Kershaw was efficient in his Game 1 start. Despite being at the center of scrutiny from fans and baseball writers for his postseason woes, Kershaw only allowed one earned run in six innings for the Dodgers.

Story developing, check back for updates.