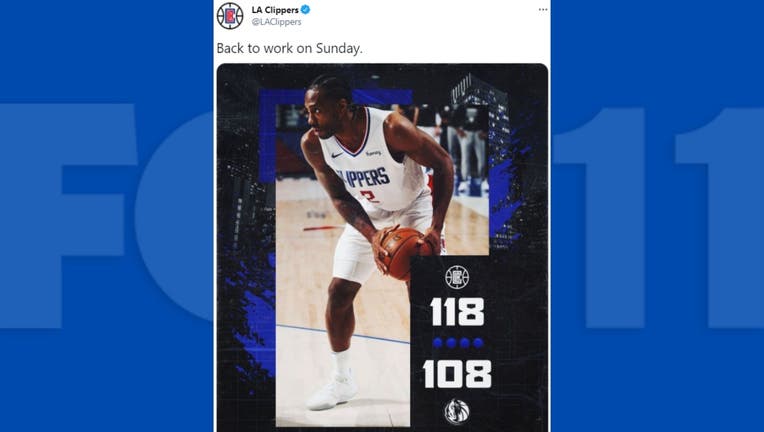 DALLAS, Texas (KTTV) - The Los Angeles Clippers no longer have to worry about being on the wrong end of a first-round series sweep after beating the Dallas Mavericks 118-108 on the road in Game 3.

Talks of the infamous Clippers curse resurfaced once again early in the game when Los Angeles was down 30-11 with less than 4:30 left in the opening quarter. Thankfully for Clipper Nation, Los Angeles was able to overcome its nightmare start by finishing the first quarter only down 34-31.

Following the 20-4 run to end the first quarter, the Clips never looked back, holding off the Mavs to cut the series deficit to 2-1.

Paul George finished the game with 27 points, 4 assists and 3 rebounds while Kawhi Leonard scored 24 points and grabbed 7 boards in the Clips victory.

The Clippers will try to split the series at 2 this Sunday, May 30 in Dallas for Game 4.

The Clippers locked in home-court advantage this series after finishing the COVID-shortened regular season with a 47-25 record, giving Los Angeles the fourth seed.