If you ‘just want to laugh,’ Jay Leno says tune in to 'You Bet Your Life'

In honor of the debut of Jay Leno’s revival of the game show "You Bet Your Life" I traveled to Los Angeles to speak with the legendary late-night host, along with music legend Kevin Eubanks.

Eubanks joins Leno as co-host on the show, a re-imagining of the classic Groucho Marx show which aired from 1950-1961. The show originated on the radio in 1947 before going to broadcast television.

"You Bet Your Life" premiered Sept. 13 on FOX stations across the country. The show features no politics and brings together strangers from all over the country who compete for cash prizes.

The beauty of the show is the idea of two strangers working together. It’s just a great commentary on our country and the diverse backgrounds we all bring to the table. There are just so many negative things happening in the world, so to see a fun show with people working together is a real joy.

With the incredible history shared between Leno and Eubanks, I was excited to sit down with both to discuss a wide variety of topics ranging from memories on "The Tonight Show" to why "You Bet Your Life" is a show we could all use right now.

"When you take politics out of it, people get along great," Leno told me. "Remember when Thanksgiving dinners used to be pleasant? You know, before politics. ‘Oh, it’s nice to see uncle Bob.’ I don’t want to hear him rant. I just want to talk to him and talk about family. And that’s what this show is. It’s really just people laughing and having a lot of fun."

"You Bet Your Life" is a game show at heart but also mixes in elements of Leno’s signature humor, including his famous headlines and more. He even has a spinning wheel dedicated to the incredible Rodney Dangerfield called "The Rodney Run."

"We love Rodney," Leno explained. "Rodney was the comedian’s comedian. There were no politics with Rodney. It was just joke... just a joke machine. And sometimes you need that... I don't want to get a lecture, I don't want to be told what to think... I just want to laugh, you know?"

Leno continued, "We call these ‘Rodney Runs,’ where we pick a topic. ‘Oh the economy is so bad. Travel is so awful.’ And it would just be 10 jokes in like a minute and a half... just get them out there and then start the show."

One of the best aspects of "The Tonight Show" was the banter between Leno and Eubanks. The way Eubanks would laugh at or comment on Leno’s jokes always added such a special context. Eubanks’ reactions would make Leno’s comedy even funnier. And that’s what you get to experience with "You Bet Your Life." There’s a musical quality to the way Leno and Eubanks bounce off of each other.

"It’s the exact same energy. The more and more you play together, it’s just so in sync, but without making it so. It just kind of happens. It’s a creative moment that happens, and I started understanding that comedy is that way, music is that way. All of that happens in the moment, and it’s not something that you prepare for it or you write it out. It’s the first time it's happening between all of you, and that’s what it feels like when we work together." 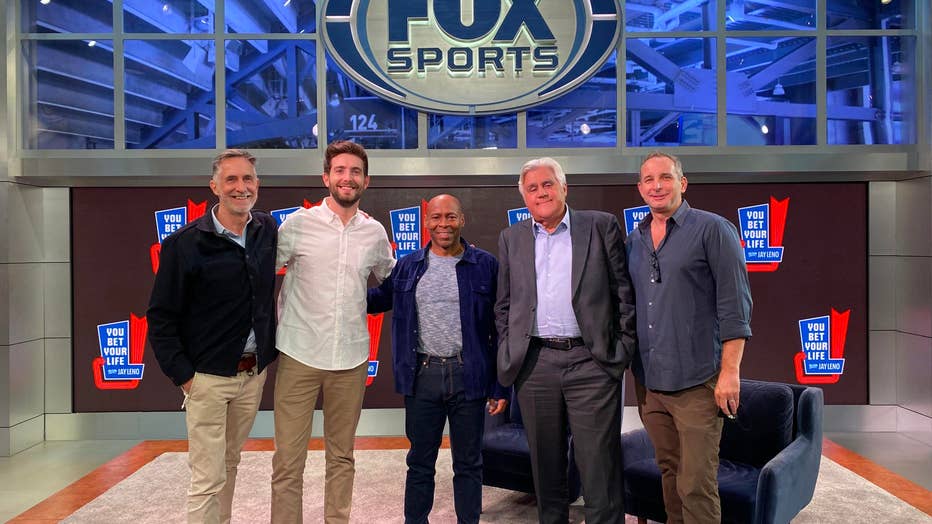 In contrast to "The Tonight Show," Eubanks is now sitting next to Leno, where they go back and forth with the contestants. The show feels unpredictable, hilarious and is a great way to get your mind off things. I found myself playing along with the contestants and leaning into my television to see what Leno and Eubanks would say next. There’s a certain edge to the show that makes it super exciting to watch.

In the interview with Leno and Eubanks, we covered a wide variety of topics, from Leno’s relationship with the audience to how his famous "Jaywalking" bit was a big inspiration for him wanting to do this show.

As we know, Eubanks led the band on "The Tonight Show." While Eubanks doesn’t lead a band on "You Bet Your Life," he did contribute the theme song for the show, which had a similar writing process to the song he wrote for "The Tonight Show," called "Kevin’s Country."

Leno and Eubanks also took a trip down memory lane where they talked about their favorite guests, how Eubanks would decide what music to play for each guest, and Leno’s first memories of telling jokes that eventually ignited his passion for comedy.