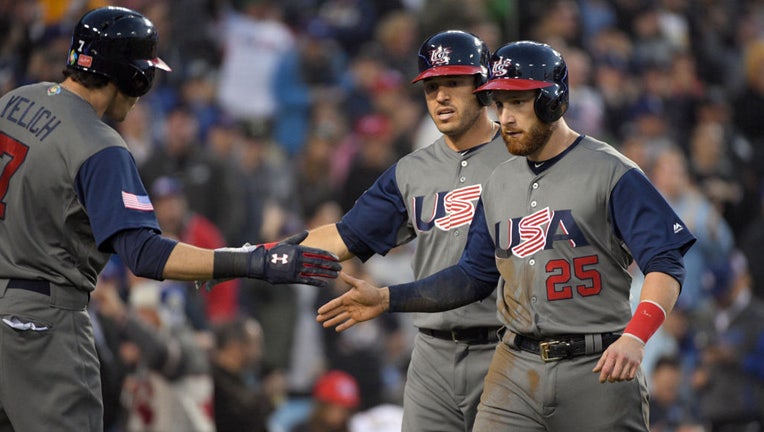 FILE-Christian Yelich #7 congratulates Jonathan Lucroy #25 and Ian Kinsler #3 of Team USA after scoring on Kinsler's two-run home run in the third inning of Game 3 of the Championship Round of the 2017 World Baseball Classic. (Matt Brown/WBCI/MLB via

FOX Sports announced Friday that it is the exclusive broadcast home of the 2023 World Baseball Classic.

Team USA, the winner of the previous WBC tourney in 2017, is in Pool C alongside Mexico, Colombia, Canada and Great Britain. Their games will be played in Phoenix. The defending champion's pool-play opener is March 11 and will air on FOX and FOX Deportes. Team USA's other three pool-play games (March 12, 13, 15) will be on FS1 and FOX Deportes.

Pool A and B winners will meet in the quarterfinals in Tokyo, while the Pool C and D champs face off in Miami. The semifinals and final will also be held in Miami, with each of those games airing on FS1 and FOX Deportes.

Angels superstar Shohei Ohtani is planning to play for Japan, which won the first two WBC competitions and finished third in the past two.

Get the latest updates on this story at FOX Sports.com.