Cal Fire said the Glass Fire broke out early Sunday morning east of Calistoga in Napa County and was burning north of St. Helena near the community of Deer Park.

Officials said the blaze had consumed at least 800 acres as of 11 a.m. EDT and had a "dangerous rate of spread." 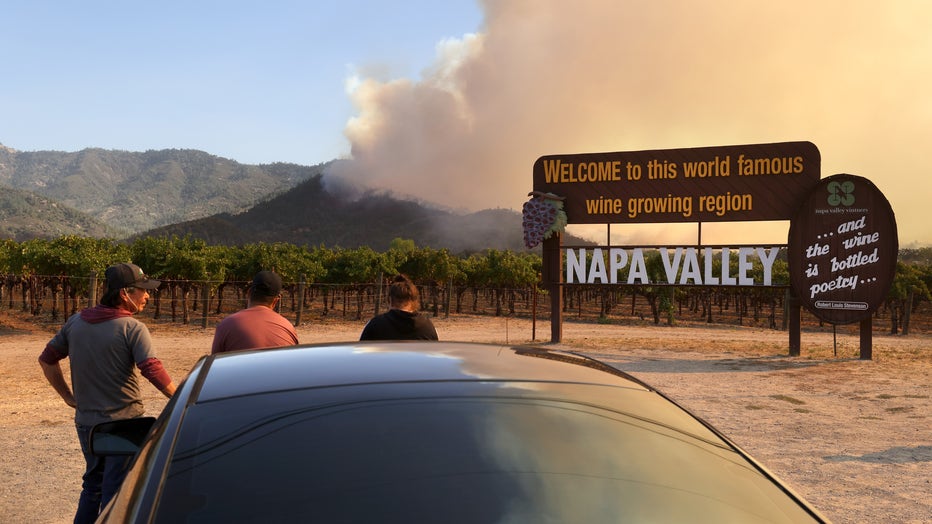 Residents look on as the Glass Fire burns through the area on September 27, 2020 in Calistoga, California. The fast moving Glass fire has burned over 1,000 acres and has destroyed homes. Much of Northern California is under a red flag warning for hig (Getty Images)

The fire remains completely uncontained, according to the agency.

Parts of the community of Angwin were also under evacuation orders. Officials were urging people in Angwin to evacuate because their evacuation route could become blocked.

One resident on Crystal Springs Road told KTVU she could hear propane tanks exploding in the distance and believed the fire was burning in an area with homes and wineries.

Authorities have not said if any structures have burned, but at least six wineries are located within the evacuation zone, according to KTVU.

Patients are being evacuated from St. Helena Hospital, according to the Contra Costa County Fire Protection District. Adventist Health St. Helena said on Facebook it is "temporarily suspending emergency and hospital care, and all patients will be transferred," because of the fire.

The sheriff's office warned those evacuating from the area to not stop or park in turnouts to view the fire.

Napa County officials are opening an evacuation center at Crosswalk Community Church on First Street in Napa as Cal Fire teams from San Mateo and Santa Cruz Counties were called in for assistance.

California is facing a new stretch of hot, dry weather with potentially strong winds that could cause power lines to arc and spark new blazes in parched vegetation that’s ready to burn.

Red Flag warnings for extreme fire weather conditions are in effect in northern and central areas of the state at 9 p.m. Saturday and last into Monday, according to the National Weather Service (NWS).

More than 8,000 California wildfires so far this year have scorched 5,600 square miles, destroyed more than 7,000 buildings, and killed 26 people.

Most of the loss has occurred since a massive outbreak of fires was ignited by a large number of dry lightning strikes in mid-August in the northern part of the state.

The renewed concern of weather igniting new blazes came with some 17,000 firefighters still on the lines of 25 major wildfires statewide, according to Cal Fire.