Jeff Bezos' Blue Origin launched into space with the billionaire, his brother Mark Bezos, 82-year-old Wally Funk and 18-year-old Oliver Daemen aboard the company's New Shepard rocket. The rocket successfully departed from the launch site in Van Horn, Texas, on the anniversary of Apollo 11 landing on the moon on July 20, 1969.

VAN HORN, Texas - A female aviation pioneer who didn’t make it into space decades ago because of her gender finally got to live her dream on Blue Origin’s rocket launch Tuesday, becoming the oldest person to reach space at 82.

Wally Funk blasted off from West Texas atop the New Shepard rocket for a 10-minute flight. She was joined by Blue Origin and Amazon founder Jeff Bezos, his brother Mark, and an 18-year-old from the Netherlands who simultaneously became the youngest person in space.

"We went right on up, and I saw darkness," Funk said during a post-mission press conference. "I’ve been waiting a long time to finally get up there." 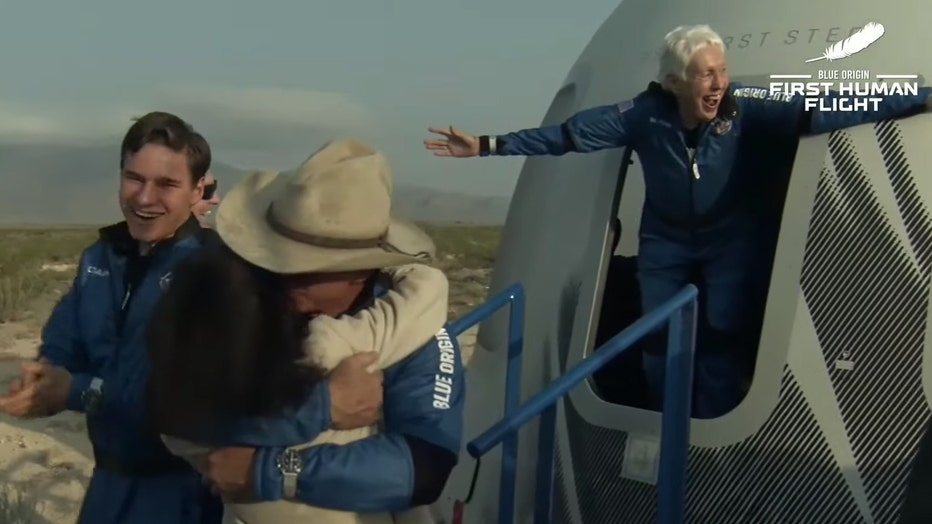 Funk was one of 13 female pilots who went through the same tests as NASA’s all-male astronaut corps in the early 1960s but never made it into space because only men were allowed.

But Funk was finally blasted off into space on Blue Origin’s first crewed rocket launch at about 9:13 a.m. EDT Tuesday following a brief hold. The 60-foot rocket accelerated toward space at three times the speed of sound before separating from the capsule and returning for an upright landing.

Funk and her fellow passengers experienced just a few minutes of weightlessness before their capsule then parachuted onto the desert in a successful landing. The 82-year-old stepped out of the capsule grinning as loved ones of the crew greeted them with cheers and hugs.

"We had a great time and it was wonderful," Funk said of her historical moment. "I want to go again, fast!"

The crew brought a number of historical artifacts, including a piece of canvas from the Wright brothers’ first airplane, a medallion made from the first hot air balloon flight and Amelia Earhart’s goggles.

"I like to think that if Amelia were here, she would be very proud of Wally," Bezos said.

Exiting the capsule: Blue Origin crew successfully back on Earth | LiveNOW from FOX

Cheers erupt as family members of the four astronauts launched to space in Blue Origin's New Shepard hug them as they exit the capsule.

The milestone mission was just the latest in a lifetime of firsts for Funk.

"We could not be more thrilled to watch her live her dream," Laurie Williams, a member of Funk’s church congregation in the Dallas area, previously told FOX 4 News.

Oliver Daemen, the now-youngest person to have ever reached space, snagged the fourth and last seat on the space capsule after the winner of a $28 million auction stepped aside because of a scheduling conflict.

Daemen became Blue Origin’s first paying customer but the company did not disclose the price of his ticket. A family spokesperson said it was considerably less than the winning bid.

"It felt way cooler than it looked," Daemen said of the flight, prompting laughter from the crowd.