NASHVILLE, Tenn. - Colin Kirby said he suffered minor burns after someone threw a firework into his convertible on July 4.

Kirby, 20, said he and his friend were heading back home that night after watching the fireworks show in downtown Nashville. When he stopped at the intersection of 17th Avenue North and Church Street, a white Infiniti G37 pulled up next to him.

"The passenger in the back rolled down the window and chucked a firework at me," Kirby told FOX Television Stations Tuesday. "It hit me on the back of the head."

Kirby said the firework hit his car’s convertible top and blew up about six to ten inches away from his head.

"I tried to grab it," he continued. "It burned two of my fingers."

He immediately pulled over and called 911. Kirby said his burns weren’t severe, but he did suffer a slight loss of hearing after the incident.

Kirby didn’t know what happened until he watched a dashcam video from his friend’s car, who was following him home that same night. The video captured the entire incident. 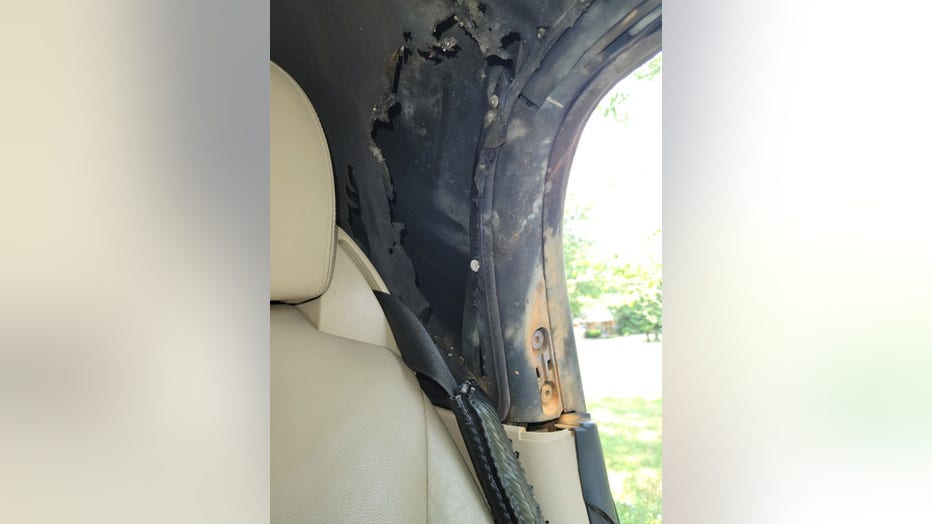 A look at the inside of Kirby’s convertible showing the burn mark after a passerby tossed a lit firework into the vehicle. (Credit: Colin Kirby)

Nashville Police said they’re looking for three suspects whom they believe were inside the white Infiniti G37. They face a charge of aggravated assault with a deadly weapon.

Authorities believe it was a random act.

Meanwhile, Kirby said he has forgiven the people responsible for the incident but he’s at a financial loss. The firecracker burned a hole through his convertible top and could cost $3,000 to get it professionally fixed. He has setup a GoFundMe page to help pay for expenses.

"I still want to see them brought to justice over it," he added.