The Department of Justice has released a photo of the documents seized from former President Donald Trump's Mar-a-Lago home.

The department argued in the filing that Trump's request for a special master "fails for multiple, independent reasons," saying it's both "unnecessary" and would "harm national security interests."

The filing said Trump "lacks standing" for a special master because the records in question belong to the United States, not him.

It said Trump won't suffer any injury without an injunction "and the harms to the government and the public would far outweigh any benefit" to him. 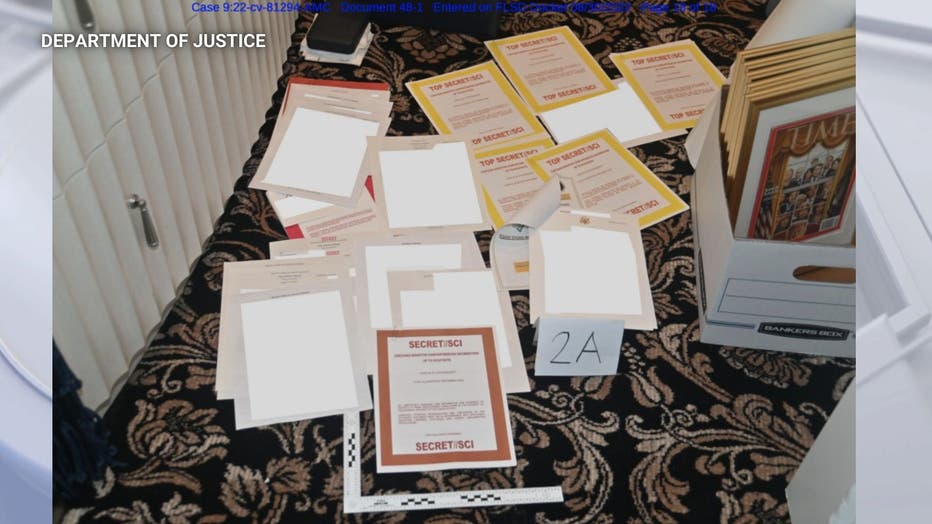 The filing added that any materials that could be subject to attorney-client privilege were already separated by the government's filter team.

"Furthermore, appointment of a special master would impede the government’s ongoing criminal investigation and—if the special master were tasked with reviewing classified documents—would impede the Intelligence Community from conducting its ongoing review of the national security risk that improper storage of these highly sensitive materials may have caused and from identifying measures to rectify or mitigate any damage that improper storage caused," the filing said. "Lastly, this case does not involve any of the types of circumstances that have warranted appointment of a special master to review materials potentially subject to attorney-client privilege."

FBI agents raided Trump's property earlier this month as part of an investigation into whether Trump illegally possessed documents relating to national security at his private residence.

Attorney General Merrick Garland said he approved the raid himself and that the DOJ did "not take such a decision likely." Trump has attacked the raid as politically motivated, which was the basis for his request of an independent review, via a "special master," of the documents the FBI took from his home.

"Politics cannot be allowed to impact the administration of justice. President Donald J. Trump is the clear frontrunner in the 2024 Republican Presidential Primary and in the 2024 General Election, should he decide to run," Trump's lawyers wrote in their request last week. "Law enforcement is a shield that protects Americans. It cannot be used as a weapon for political purposes."

Cannon notably has not yet granted another request from Trump – that she block the government from reviewing the materials it has seized from Trump's estate until a special master is appointed. That means the DOJ is able to continue to review the documents in the meantime, which it said it is doing in a separate filing Monday.

The government initiated the search in response to what it believed to be a violation of federal laws: 18 USC 793 — gathering, transmitting or losing defense information; 18 USC 2071 — concealment, removal or mutilation; and 18 USC 1519 — destruction, alteration or falsification of records in federal investigations.

Trump and his lawyers, meanwhile, say that the documents were brought to his home while he was the president and that he ordered them declassified under broad authority he claims is given to the president.

This is a developing story, please check back for updates.