Megan Thee Stallion testifies she was shot by Tory Lanez

LOS ANGELES - Megan Thee Stallion testified Tuesday that she froze when fellow musician Tory Lanez told her to "dance, bitch" and that he shot her in the feet after she got out of an SUV in the Hollywood Hills nearly 2 1/2 years ago following a pool party at Kylie Jenner's home.

"I'm in shock. I'm scared. I can't believe he's shooting at me," she said of her fellow rapper.

Lanez -- whose real name is Daystar Peterson -- is charged with one count each of assault with a semiautomatic firearm, discharging a firearm with gross negligence and carrying a loaded, unregistered firearm in a vehicle, along with allegations that he personally used a firearm and inflicted great bodily injury on her shortly before 4:30 a.m. July 12, 2020.

In a packed downtown Los Angeles courtroom, Megan Thee Stallion said she could see Lanez holding the gun and pointing it at her and saw him shooting the gun "after he said, `Dance, bitch."'

The rapper -- whose real name is Megan Pete -- said she felt "shock" and "hurt" and saw blood when she looked at her feet.

She said she felt pain in both of her feet, but agreed to get back in the vehicle with Lanez and two other people because she was wearing a thong bikini and felt like her manager would know what to do if she was able to get to him.

"He started apologizing," she said of Lanez's conduct after the shooting.

She testified that Lanez offered her $1 million not to say anything and that he said he couldn't go to jail because he was already on probation -- the latter of which defense attorney George Mgdesyan told jurors was simply not the case.

"I did not know he had a gun that night," she said, when asked if she knew Lanez to have guns. 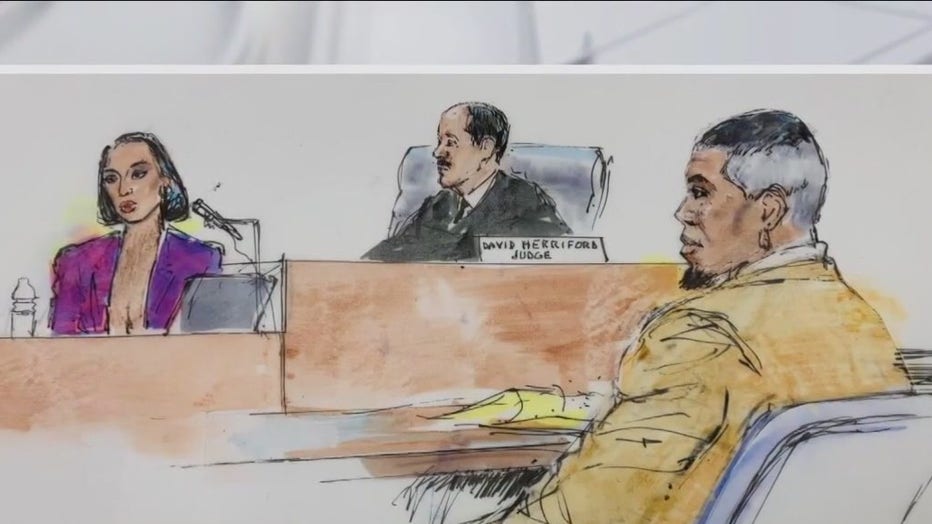 Megan Thee Stallion said the vehicle was stopped soon afterward by police, who ordered all of the occupants out as her feet were still bleeding. She said she told police that she had stepped on glass when they began questioning her.

"At this time, we were at the height of police brutality with George Floyd," she said, adding that she didn't want to see anybody die and that it was "not really acceptable" in the Black community to cooperate with police.

She told jurors that she was taken by ambulance to Cedars-Sinai Medical Center and that doctors discovered bullet fragments in both of her feet, which required surgery to remove.

"I couldn't walk for a while," she said. "I still have nerve damage. I can't really feel the side of my left foot. The back of my feet are always sore, but I just push through it."

She said she subsequently received a series of text messages from Lanez, and said she wondered, "Why are you bothering me? ... You know you shot me."

When Deputy District Attorney Kathy Ta asked if she was nervous about being in court, she said, "I just don't feel good. I can't believe I have to come up here and do this."

The female rapper's voice choked with emotion when she was asked if she knew Lanez, saying she felt like she was looking for people to fill the void after her mother's death and that she felt she had a lot in common with him.

She said she had texted him to come to Jenner's party and subsequently decided she wanted to leave when her hair had "started to look crazy" and her wig started slipping, and that he didn't want to leave.

"He had an attitude," she said of his subsequent mood in the vehicle, which she said provoked an argument in which he allegedly called her and her then-best friend "bitches" and "hoes."

She said she initially asked to be let out of the vehicle in Hollywood and got back inside because she realized she was "literally in the peak of being famous and I have on a thong," and heard Lanez and her friend "screaming to the top of their lungs" at each other and subsequently asked again to be let out of the vehicle moments before she was shot.

She said she felt like she "really rubbed him the wrong way" with her comment about his career in the music industry before she got out of the vehicle.

In his opening statement Monday, Deputy District Attorney Alexander Bott told jurors that the prosecution will ask the panel to "hold the defendant accountable" and find him guilty as charged.

Within about five minutes of the shooting, a female friend who was with Megan Thee Stallion texted one of the rapper's security guards, "Help," "Tory shot meg," and "911," the prosecutor said, and police subsequently found the gun still warm to the touch on the floorboard near where Lanez had been seated, according to Bott.

Lanez and the rapper's female friend, who was nearby at the time of the shooting, both later tested positive for gunshot residue, the deputy district attorney said.

In a subsequent phone call, Lanez "profusely apologized for his actions" and claimed he was "just too drunk," Bott told jurors.

Lanez's attorney -- who said he expects the jury to acquit his client after they finish hearing the case -- urged the panel to keep an open mind and said jurors are going to have to judge whether his client's accuser is "being truthful."

The defense attorney said it is his job to show them that "she's lying." He called it a "case about jealousy," telling jurors that the two women had gotten into an argument while in the SUV and that a neighbor reported witnessing a fistfight between the women after the vehicle stopped on Nichols Canyon Road.

The defense lawyer told jurors that his client subsequently apologized in a jailhouse phone call to the female rapper's friend for having a sexual relationship with both women and disclosing it, with no mention being made of the shooting.

He questioned why the other woman who had been in the vehicle would have had gunshot residue on her if she wasn't the person who fired the shots and said police failed to test the gun to check if her DNA could be found on the weapon.

Lanez's attorney said the most important things for jurors to determine will be who got out of the vehicle, who was fighting and who fired the gun.

He said he expected jurors to acquit his client after they hear the entire case.

Lanez, 30, remains out of custody on a $350,000 bond and walked into the courtroom while holding hands with his young son. The rapper had been under house arrest and under electronic monitoring while awaiting trial, but those restrictions were lifted last week by Superior Court Judge David Herriford.

At a hearing last year in which Lanez was ordered to stand trial, Los Angeles Police Department Detective Ryan Stogner testified that no one other than Megan Thee Stallion heard the alleged remark, "Dance, bitch."

She initially told officers and doctors she had not been shot and that broken glass had caused the injuries to her feet, according to the detective.

She told the detective she was "extremely scared and embarrassed," was "scared he was going to get in trouble" and was concerned the police might shoot him, but was "sincere," "visibly distraught" and "crying" when she subsequently admitted Lanez had shot her, Stogner testified.

In a video posted on Instagram Live following the shooting, Megan Thee Stallion said, "Tory shot me. You shot me and you got your publicist and your people are lying ... Stop lying."

She said police officers drove her to a hospital, where she underwent surgery, and added she was "incredibly grateful to be alive."

In an op-ed published in The New York Times, she wrote that she was "recently the victim of an act of violence by a man" and that she was initially silent about what had happened "out of fear for myself and my friends."

The rapper gained fame in part through freestyling videos shared widely on Instagram. Her song "Savage" went viral on TikTok and topped the Billboard Hot 100 chart in May 2020, while her provocative collaboration with Cardi B on "WAP" garnered her more attention.