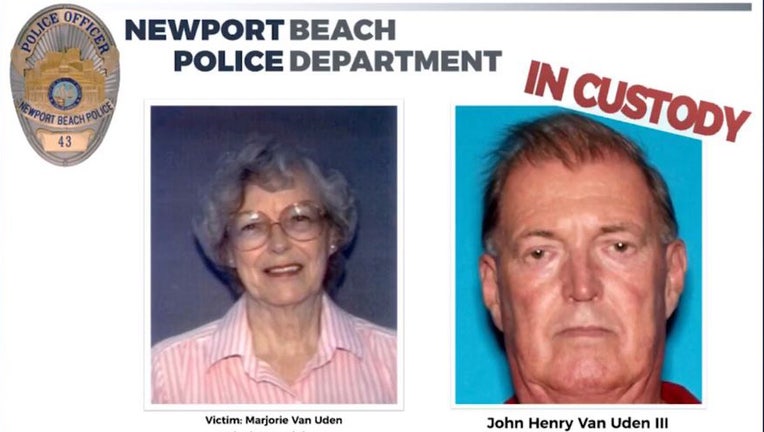 SANTA ANA, Calif. - A 73-year-old Dana Point man pleaded guilty Wednesday to voluntary manslaughter for the 1994 beating death of his mother in Corona del Mar and was immediately sentenced to three years behind bars, or time he has already served awaiting trial.

John Henry Van Uden III was given credit for 1,510 days behind bars with good behavior and will be released from custody as soon as Wednesday night.

Van Uden was charged two years ago with murder and a special circumstance allegation of killing for financial gain. Had he gone to trial and been convicted as charged, he would have faced life in prison without the possibility of parole.

Van Uden's 76-year-old mother, Frances M. Van Uden, was found dead in the living room of her Corona del Mar home on Keel Drive on March 5, 1994. Anxious neighbors called police because they had not seen the widow in two days, and the family had offered a $50,000 reward for the capture of her killer.

A couple of retired detectives from Long Beach were the latest to take a crack at the case and they turned up new clues, resulting in Van Uden's arrest at Dana Point Harbor on Nov. 2, 2017. The Newport Beach City Council coughed up money to pay the investigators.

"We have never forgotten what happened in March of 1994," Newport Beach police Chief Jon Lewis said after Van Uden's arrest, telling reporters that he had been a "strong suspect" from the beginning.

Van Uden's attorney, Mick Hill of the Orange County Public Defender's Office, filed a motion Nov. 7 arguing that his client could not receive a fair trial and had been denied his rights to a speedy trial. Hill maintained that Newport Beach police failed to investigate clues that could have exonerated his client and harassed his alibi witness and her son for years.

Hill -- who did not join with his client in the plea -- alleged that Newport Beach police "used numerous acts of dishonesty to try to build a case against Mr. Van Uden and ignored or failed to gather evidence that supported the defendant's innocence."

Hill claimed in his motion that police tactics included "outright lying to the defendant about particular evidence" and added that "most concerning is NBPD illegally listened to and recorded attorney-client conversations. Based on that information, NBPD used an undercover officer to pose as a private defense investigator in order to gather incriminating information from defendant in violation of defendant's rights."

When that failed, Hill alleged, police "ratcheted up the pressure and hatched a plan to use an undercover police officer to act as a hitman in order to scare the defendant's then-girlfriend, Maureen Novratil, into flipping on Mr. Van Uden."

Novratil had supplied an alibi for the defendant for years, Hill said, alleging that police "repeatedly" approached her at work and elsewhere and "threatened" to charge her as an accomplice and have her son taken away from her. When that failed, the police turned to her juvenile son, Ryan, to threaten him with being charged as an accomplice, Hill said.

"NBPD proved they would do just about anything in order to get Mr. Van Uden for his mother's murder except actually investigating all of the facts of the case," Hill said.

A good deal of evidence is now unavailable and key witnesses are dead, including another alibi witness for the defendant, Hill said.

A neighbor told police after the murder that he suspected a roofing contractor may have killed the victim, Hill said. But police did nothing to chase down that lead, the defense attorney claimed.

An autopsy showed that the victim was killed by a lathe or roofing hammer, Hill said.