'It's on the boat!' shark lands on New Zealand fishing boat

A group of people on a fishing charter off Whitianga, New Zealand, were stunned when a large mako shark leaped out of the water and landed on the front of the boat, video uploaded on Nov. 6 shows. (Credit: Churchys Charters NZ via Storyful)

MAUI, Hawaii - Authorities are searching for a missing woman after a possible encounter with a shark in Hawaii.

The U.S. Coast Guard said the 60-year-old female was last seen about 75 yards off of Keawakapu Beach, Maui, Thursday, while snorkeling with her husband.

Dan Dennison, a spokesman for the Hawaii Department of Land and Natural Resources, said the missing woman's husband called 911 about noon to report the incident. According to Dennison, the man tried to look for his wife before returning to shore but couldn't find her.

Dennison said he couldn't comment on reports that the man said he tried to fight off the shark.

According to local reports, the woman was last seen wearing a blue bathing suit, and a snorkel set and a piece of a bathing suit was found on the beach.

Maui Fire Department and Maui Ocean Safety personnel have been conducting an extensive in-water search, as well as an aerial search supported by Maui Fire's Air 1 helicopter and the U.S. Coast Guard.

"I think there were some people who provided witness accounts that were on the beach, but since the possible time of this incident, there haven't been any reports of sharks in the water," Dennison said in a news briefing Thursday afternoon.

Dennison did not have information about the shark that may have been involved in the encounter.

GREAT WHITE SHARK ENCOUNTERS ARE INCREASING DUE TO CLIMATE CHANGE

As of Friday morning, Dennison said authorities have not spotted anyone in the water. The search is ongoing.

Shark warning signs are up from the Mauna Kai condominiums to Ulua Point and will remain in place at least until noon Friday.

Typically, shark incident communications protocols usually preclude DLNR from releasing information about shark-human encounters until all the pertinent facts are known. However, in this case, Dennison said this possible encounter caused them to set aside the normal operating procedure. Dennison was unable to provide any information about the people involved in the incident.

WHERE DO MOST SHARK ATTACKS HAPPEN IN THE US? 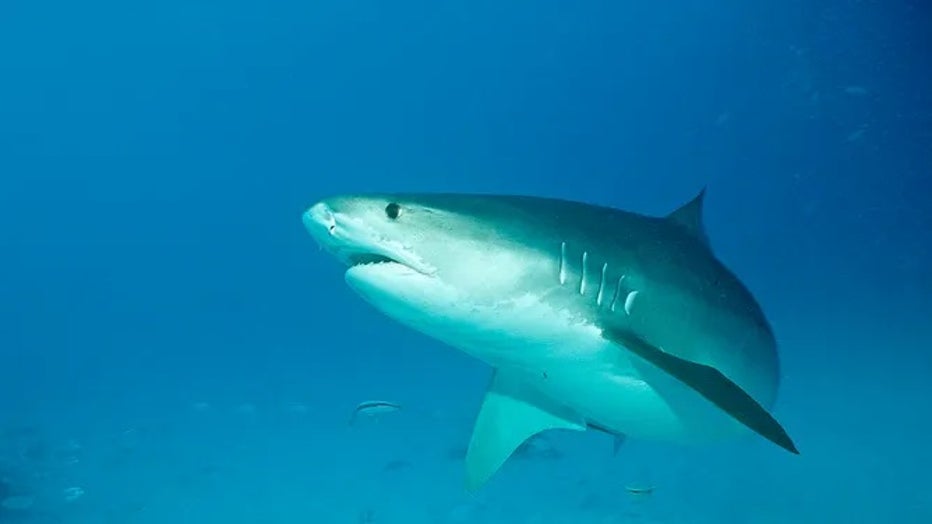 The last deadly shark attack in Hawaii was on Dec. 8, 20220, after a 56-year-old surfer suffered severe lacerations to left leg from an estimated 14-foot tiger shark in Honolua Bay about 20 yards from shore.(Reinhard Dirscherl / Getty Images)

The state's Division of Aquatic Resources reported an increased risk of being bitten by a shark during certain months, in particular, October through December. Although fewer people are in the water from November to December, some of Hawaii’s most serious shark attacks took place during those months.

The last deadly shark attack in Hawaii was on Dec. 8, 2020, after a 56-year-old surfer suffered severe lacerations to the left leg from an estimated 14-foot tiger shark in Honolua Bay about 20 yards from shore.