Shouts for help could be heard just moments after part of the Champlain Towers South building collapsed on June 24, 2021. Credit: David Araujo via Storyful

In his footage, people can be heard shouting, ‘Help!’ and, ‘I can’t get out!’ People down on the street below can be heard desperately shouting back at those in the still-standing apartments to use the stairs. The elevator had collapsed.

Araujo also filmed some of the first firefighters who arrived as they began climbing into the wreckage, which at one point stood at more than 30 feet tall.

"How many apartments is that?" One onlooker asked in the video, as he begins to count.

"A lot. A lot of apartments," someone responded.

No one has been rescued since the first hours after the collapse.

And while more than 100 residents, mostly from the oceanside units, are still missing more than a week later, many others who barely escaped are trying to cope with what happened. 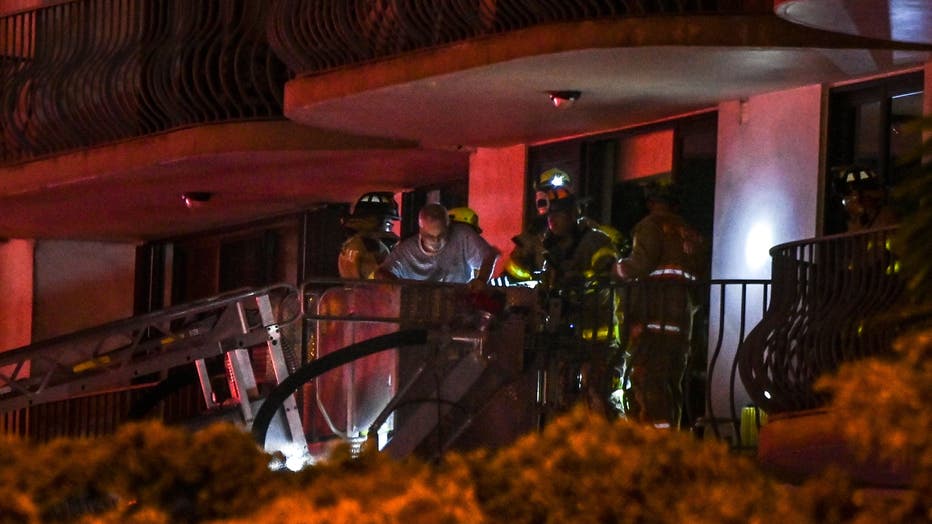 Alfredo Lopez and his wife Marian were asleep when the first thundering blast jolted them awake. Moments later, a second boom, much louder than the first, shook the bed on the sixth floor of their apartment.

"All I could see was just white dust, very thick. I could barely see the balcony railing," Lopez said.

The lights had cut out and the emergency alarm came on, warning the residents to evacuate.

Then he opened their front door to see half of the building gone. A jagged five-foot chunk of flooring barely left enough room to escape.

He and other survivors went down the cracked stairwell that had separated from the wall, along the way helping neighbors they met for the first time and others they’d known for years.

"When I opened the staircase door and half the staircase was missing, at that point I know we’re racing against time to all get out as a family," Albert Aguero told the Associated Press.

He wondered if the building had been struck by lightning. His son thought a plane had crashed, but there was little time to talk as they rushed into the stairwell, wondering if they had enough time to descend 11 painstaking floors. No one panicked or cried.

Each time they descended another level, they yelled out the floor number, a small victory of survival, one floor closer to freedom.

Gabriel Nir had just finished a late night workout and was in the kitchen cooking salmon. Thick, concrete dust came rushing into his family’s apartment from the patio windows near the pool. The ground was shaking.

"We have to go now!" he screamed to his sister. They ran to the lobby, where their mother urged the security guard to call 911. The guard couldn’t remember the address so Gabriel phoned.

Outside, he noticed the car deck had caved into the parking garage. Car alarms were blaring, emergency lights were flashing and water was rapidly filling the garage where pipes had burst.

He ran back to the lobby, where the choking dust cloud was making it difficult to see. Residents from upstairs were running out the door screaming, many still in pajamas, one man pushing a baby stroller.

It was getting harder to breathe. The rumbling intensified, as Nir pushed his mom and sister safely into the street.

Tiny rocks and bits of debris pelted his head as he turned back to face the image that still haunts him.

"I saw the building turning into a white dust," he told the Associated Press. "I heard people screaming."

"I have to go back. I have to make sure everyone's OK," he said. But he knew it was too late.

As another survivor, Susana Alvarez, fled her apartment, she banged on her neighbors' doors and used her cellphone flashlight in the darkness. From the wrecked side of the building, she heard screams.

"Help me, help me," she heard a woman crying.

"There were people alive in there," Alvarez said.

Now, those who narrowly escaped have no homes. It's all gone. Clothes, computers, cars, even prescriptions. It's inconvenient, they say, but it doesn't really matter. They are alive.

At night, they still hear the screams, and it all comes rushing back.

Nir finds it difficult to sleep. He tries to stay busy, to push away the what-ifs.

"It’s like a virus. It just never goes away," he said regretfully. "I wish I could have done more ... these people that are missing, they aren't coming back."

Alvarez too is filled with grief. Her mother's best friend is among the dead.

She hasn’t been in a bed since that night, can’t bring herself to crawl under the covers, instead sleeping in a chair.

"The people in the rubble, I could hear them. Some were yelling ‘Help’," she said.

"That will haunt me forever. I will never forget that."