Deputies in camouflage stood by as a few in the crowd yelled epithets to police. Law enforcement remained calm as the crowd got rowdy. Tanks were rolled in. Authorities in riot gear stood motionless outside the house, creating a barrier between the crowd and the home. Elissa Harrington reports

OAKLAND, Calif. - Alameda County sheriff's deputies descended with AR-15 rifles on the porch of an Oakland home early Tuesday to remove homeless mothers from a property they don't own or pay for.

As the deputies busted open the door with a battering ram and escorted the mothers out of the Magnolia Street home, dozens of community activists stood on the sidewalk, taking cell phone video of the dramatic encounter.

The moms, who weeks ago formed an ad hoc group called Moms 4 Housing, lost a court battle last week, when Alameda County Superior Court Judge Patrick McKinney said they didn't have a valid claim to squat in the home, which they moved into without paying rent in November.

"They came in like an Army for mothers and babies," the lead mother, Dominique Walker, said after the removal. "We have the right to housing. This is just the beginning." She did not elaborate on what she would do next.

Just before 6 a.m., the deputies made entry into the home. They forced the mothers outside, binding their hands with plastic ties. One of the mothers screamed, "Why are you taking me to jail? I'm just trying to protect my children." It's unclear where the children were; they were not seen on camera as the women were being escorted out. Walker would not say where the children were, only that "they are safe." The sheriff's office confirmed the children had been taken elsewhere before the removal.

Another woman yelled, "Ya'll got SWAT out here?" Activist Cat Brooks got in the middle of some tense moments between protesters and deputies and got knocked down in the process. The crowd chanted, "Let the moms go! Let the moms go!" and "Shame on you! Shame on you!" Activist Carole Fife shouted, "If you are not angry, you are not paying attention. They should not be in handcuffs right now for demanding to shelter their children. This is insane!"

Even Mayor Libby Schaaf chimed in. In a separate interview, she said she was "shocked" at the show of force used to move the mothers out.

Without elaborating, Kelly said deputies recognized some of the protesters at the rally from other "violent" Bay Area protests. He said that some projectiles were thrown at his deputies. 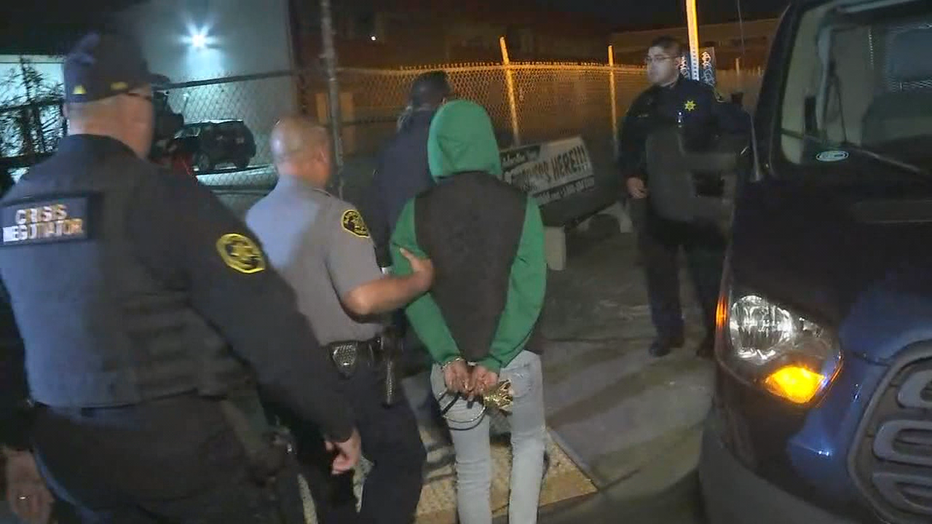 A mother is taken away in handcuffs from a Magnolia Street home. Jan. 14, 2020

Kelly said two mothers and one man inside the home were arrested on misdemeanor charges of resisting arrest and obstruction. They are: Misty Cross, 38; Tolani King, 46; and Jesse Turner, 25, all of Oakland. A fourth person, Walter Baker, 28, was arrested outside the home on the same charges.

All were released by Tuesday afternoon and each posted $5,000 bail, according to jail records. The bail was paid for with the $29,000 that had been raised through a GoFundMe account.

Kelly said they were given "ample opportunity" not to be taken into custody, but that they were not cooperative and had asked to be peacefully arrested. "No force was used," Kelly said. "Our personnel showed tremendous restraint."

He added that deputies also had to use force to open the doors because the women had "fortified" the entrance and exit to the home.

Walker told reporters that she was not taken into custody because she was doing a live newscast on Democracy Now when the deputies moved in.

Deputies in camouflage stood by as a few in the crowd yelled epithets to police. Law enforcement remained calm as the crowd got rowdy. Armored vehicles, including a Bearcat, designed for military and law-enforcement use were rolled in. Authorities in riot gear stood motionless outside the house, creating a barrier between the crowd and the home. Deputies later boarded up the house with wood so that no one could get in.

Kelly said his office, which conducts civil evictions, planned for this removal and his deputies were highly aware of how high-profile this situation has become. The "whole world was watching," Kelly said. "We obviously know what the optics were."

Kelly added: "We didn't want to go in with a heavy footprint. But we had to have people on standby, and a ballistic vehicle in case we had to do rescues of civilians in the home or officers."

Kelly said his deputies acted very professionally and despite the critics, his office was able to perform a "low-key" operation that is "not your typical eviction." No injuries were reported.

The home is owned by Wedgewood Properties in Southern California. The company, who considered the women to be trespassers, had offered to relocate the women and pay two months rent, which the women rejected. Walker said that the women had wanted to buy the home, which Wedgewood rejected.

Wedgewood spokesman Sam Singer said: "Wedgewood is pleased the illegal occupation of its Oakland home has ended peacefully.  That is what the company has sought since the start....The solution to Oakland’s housing crisis is not the redistribution of citizens’ homes through illegal break-ins and seizures by squatters. That is the violent, dangerous, and unsuccessful path taken by this handful of activists​​."

He added that Wedgewood will now work with a non-profit, Shelter 37, to renovate the home "giving opportunities to at-risk Oakland youths and splitting the profits with the non-profit so that other youths may benefit."

The community - and beyond - has been divided over whether the women should be allowed to stay in a home they don't pay for.

While hundreds have come out to rally to support their plight that housing is a human right and the Bay Area is unaffordable for many regular people, others have criticized the women for taking over something that is not rightfully theirs.

Oakland has had a 47 percent increase in homelessness in just two years, and 3,210 homeless people are unsheltered, according to a point-in-time count. On the Moms 4 Housing website, the women note that there are four times as many empty homes in Oakland as there are people without homes.

The movement was started 34-year-old Walker, who moved into the home with her 1-year-old son and 5-year-old daughter on Nov. 18. Several other mothers and children later joined her.

In her online bio, Walker said she is a longtime Oakland native who attended Castlemont High, who later earned a bachelor's in sociology from Tougaloo College in Mississippi.

She moved back to Oakland in April and was planning to get a masters in nursing until she saw how the housing crisis had impacted her community. She said she became homeless while working full time. She decided to form this group and brazenly call attention to taking over a home to take a stand.

"We have lost our humanity," she wrote." There are children sleeping on the streets - we should be outraged! I am. I will continue fighting for the unhoused until we all have shelter." 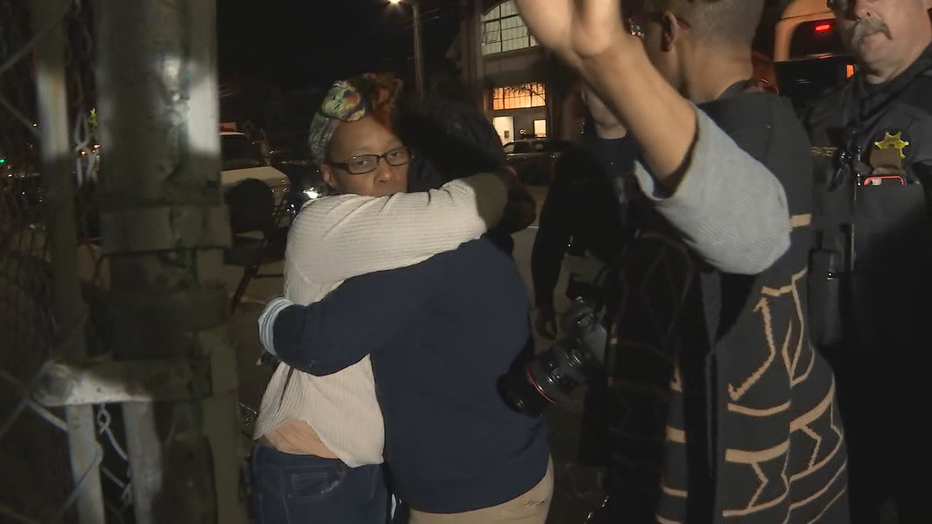 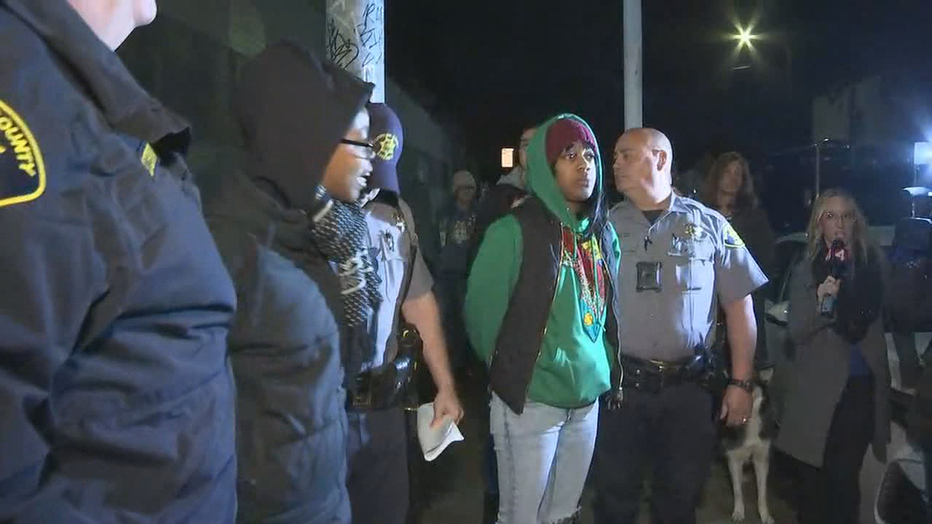 Two mothers and possibly one man were arrested at the Moms 4 Housing removal. Jan. 14, 2020 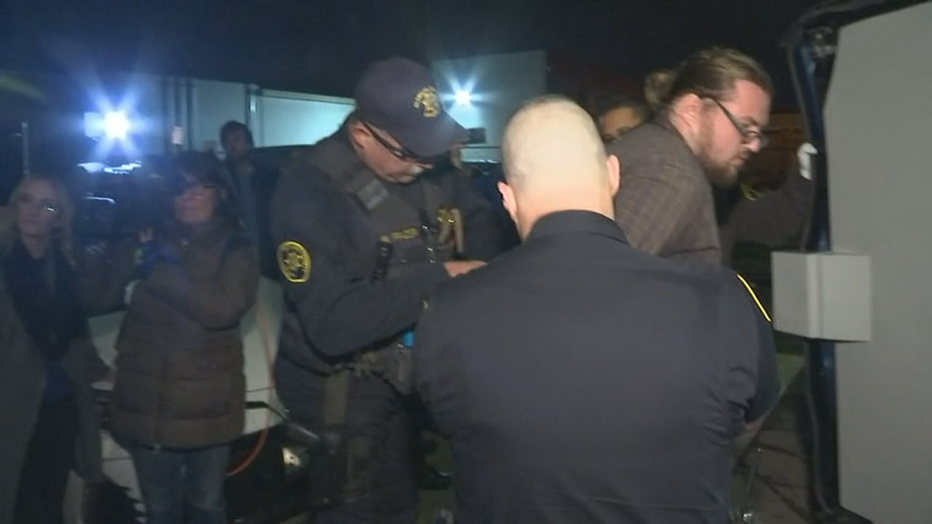 Two mothers and possibly one man were arrested at the Moms 4 Housing removal today. Jan. 14, 2020 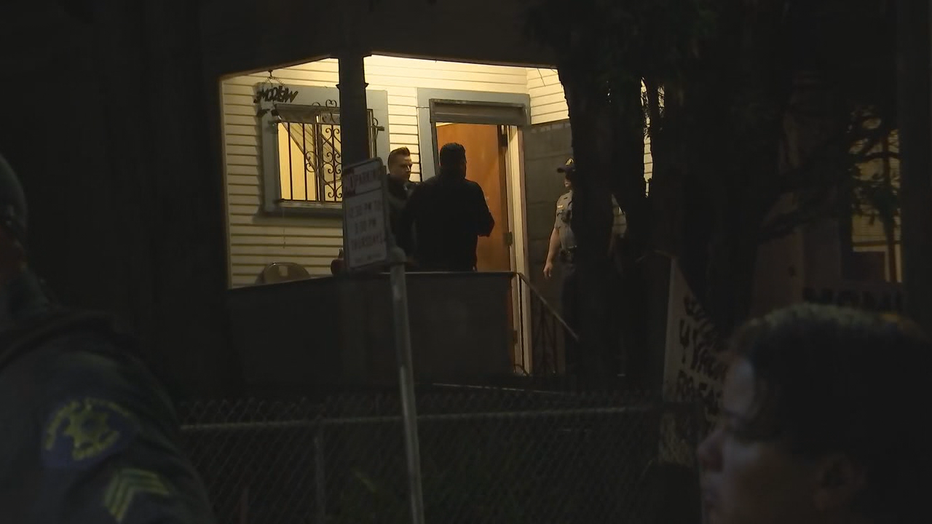 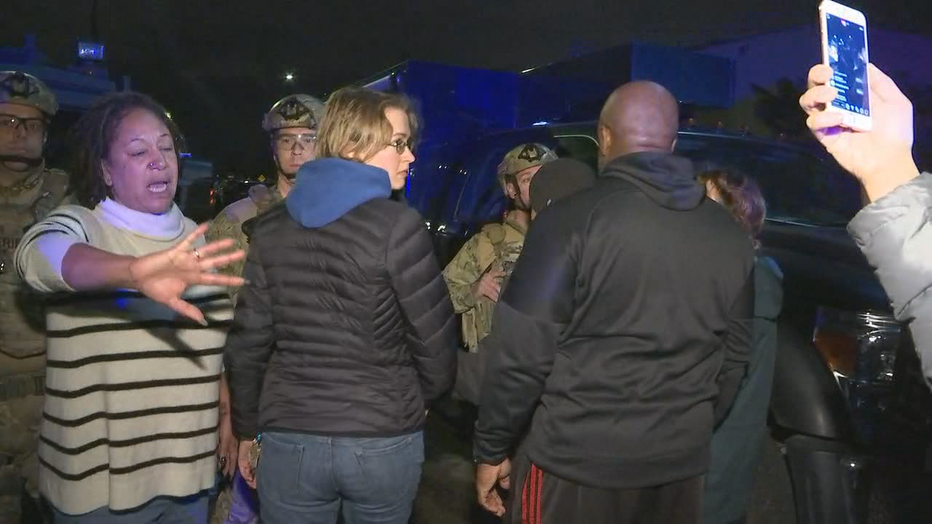 Things are getting a little tense outside the Moms 4 Housing home where the women have been evicted. Activist Cat Brooks got knocked down. Jan. 14, 2020 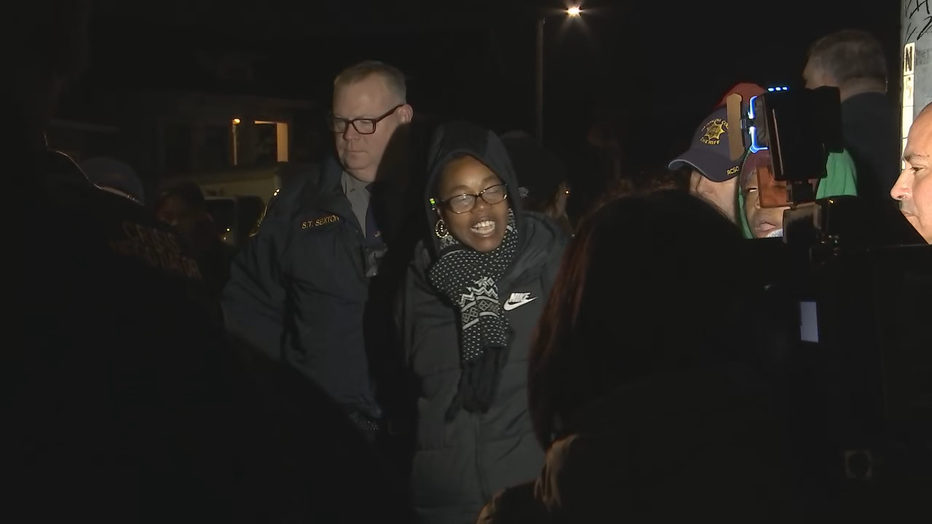 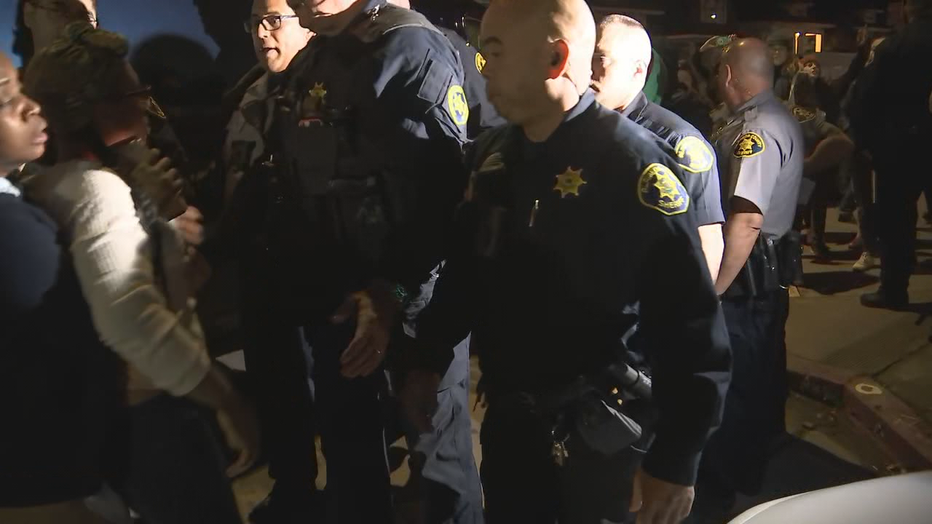 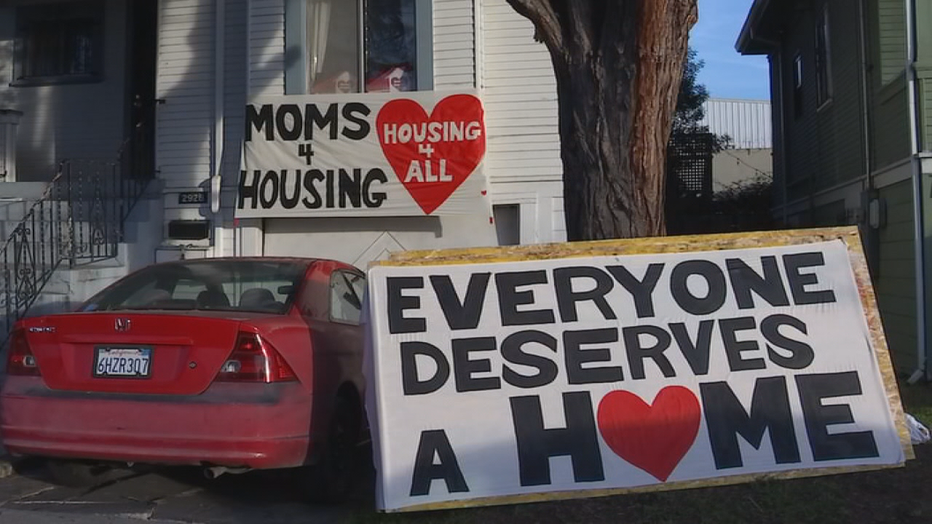 A sign in front of the Magnolia Street home in Oakland. 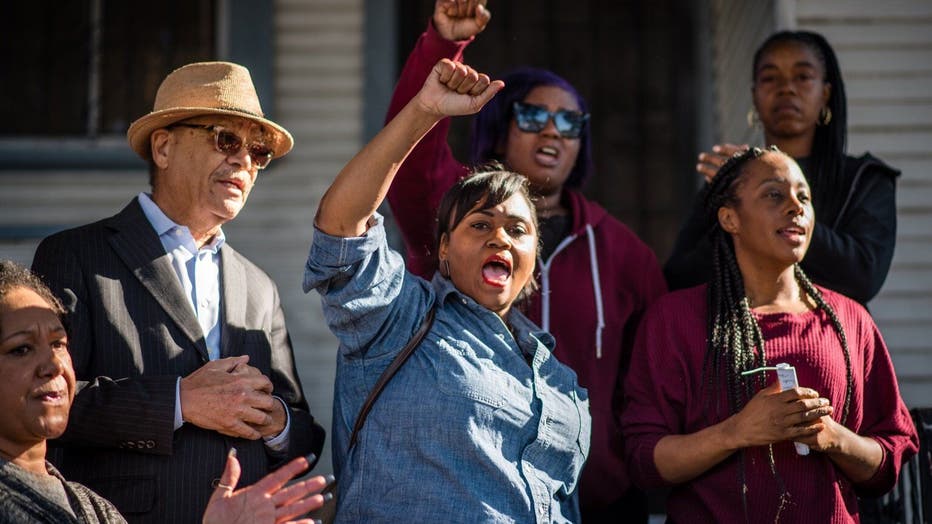