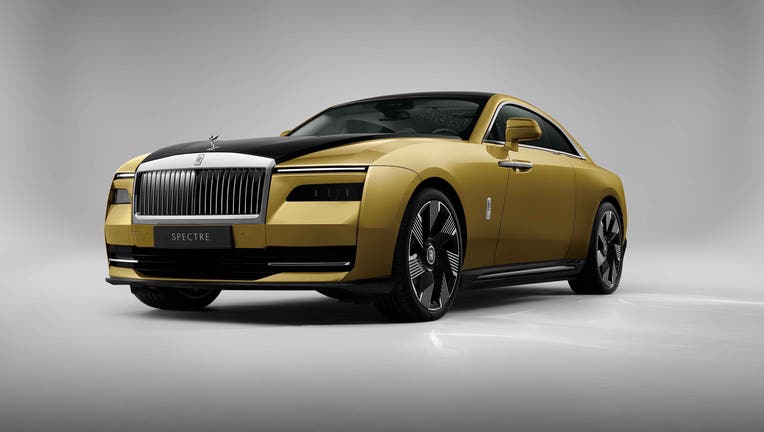 Rolls-Royce has unveiled what will likely be its quietest car ever.

The Spectre is the brand's first all-electric model and is set to enter production late next year.

The coupe features rear-hinged "suicide" doors and a fastback body that resembles the Rolls-Royce Wraith's, but rides on a battery-powered version of the aluminum Architecture of Luxury platform that underpins the company's flagship Phantom and Cullinan SUV in internal combustion engine form.

Despite its two-door body style, it is longer than the Cullinan at 214 inches, but slightly shorter than the Phantom.

"Spectre possesses all the qualities that have secured the Rolls-Royce legend. This incredible motor car, conceived from the very beginning as our first fully-electric model, is silent, powerful and demonstrates how perfectly Rolls-Royce is suited to electrification," Rolls-Royce CEO Torsten Müller-Ötvös said.

The Biden administration has released a federal strategy to build 500,000 charging stations for electric vehicles across the country and ultimately transform the U.S. auto industry.

"Spectre’s all-electric powertrain will assure the marque’s sustained success and relevance while dramatically increasing the definition of each characteristic that makes a Rolls-Royce a Rolls-Royce."

Rolls-Royce has not revealed if the Spectre is rear-wheel-drive or all-wheel-drive, but said it has an estimated power output of 576 horsepower and will be able to accelerate to 60 mph in 4.4 seconds.

Its EPA-rated range is expected to be approximately 260 miles between charges, based on internal testing.

The interior of the Spectre, Rolls-Royce’s first all-electric model, is shown in a provided image. (Credit: Rolls-Royce)

Along with all the luxury appointments Rolls-Royce cars are known for, the Spectre will be available with a Starlight headliner and doors embedded with thousands of points of light.

When it arrives on the market, the Spectre will be competing with the just-revealed $300,000 Cadillac Celesitq electric car that is set to enter production at the same time.

Exact pricing has not been announced yet, but Rolls-Royce said the Spectre will slot between the Cullinan and Phantom, which would put it in the $400,000 range.