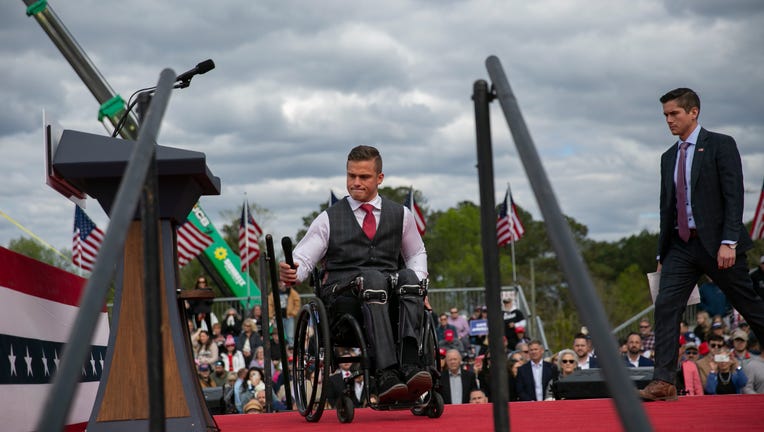 SELMA, NC - APRIL 09: Rep. Madison Cawthorn speaks before a rally for former U.S. President Donald Trump at The Farm at 95 on April 9, 2022 in Selma, North Carolina. The rally comes about five weeks before North Carolinas primary elections where Trum

A loaded gun was found in North Carolina U.S. Rep. Madison Cawthorn's carry-on bag at an airport security checkpoint Tuesday -- the second time he has been stopped with a gun at an airport in the past 14 months, officials said.

Responding officers identified the 26-year-old Republican as the owner of the bag where the gun was found, police said in a statement. Cawthorn acknowledged that the gun was his and cooperated with officers, authorities said. He was issued a citation for possession of a dangerous weapon on city property, a misdemeanor. Cawthorn was released but police held on to the firearm, as is routine.

The infraction is punishable by civil penalties, including a fine of up to $13,900 depending on certain factors, such as whether a firearm is loaded and multiple offenses, Langston said. In this case the firearm was loaded.

Langston said this was the second time in recent history that a gun was found in Cawthorn's carry-on bag. The first was at an Asheville Regional Airport checkpoint in February 2021.

TSA officers have intercepted more than 1,800 firearms at checkpoints so far this year, Langston said.

A spokesperson for Cawthorn's office and his campaign didn't immediately respond to an email seeking comment.

After winning a GOP congressional primary runoff in 2020 over then-President Donald Trump's pick, Cawthorn won the general election at age 25 and has became one of Trump's strongest supporters. Trump recently featured Cawthorn as a rally speaker and endorsed  him for reelection.

Fellow Republicans in North Carolina have spoken out against his reelection, however, including U.S. Sen. Thom Tillis, who has endorsed a state legislator for the seat. Cawthorn has drawn criticism for recent incendiary comments, including one in which he called Ukrainian President Volodymyr Zelenskyy a "thug."

The airport checkpoint incidents haven't been Cawthorn's only brushes with law enforcement. Last month, for the third time in five months, he was cited by state troopers for a traffic violation, including driving with a revoked license. He is scheduled to appear in court on May 6.