WASHINGTON - Joe Biden became the 46th president of the United States during Wednesday's inauguration. He now will take over the official @POTUS Twitter account.

Shortly after speaking at the inauguration ceremony in Washington, D.C., President Biden made his first tweet from the @POTUS account:

"There is no time to waste when it comes to tackling the crises we face. That's why today, I am heading to the Oval Office to get right to work delivering bold action and immediate relief for American families." 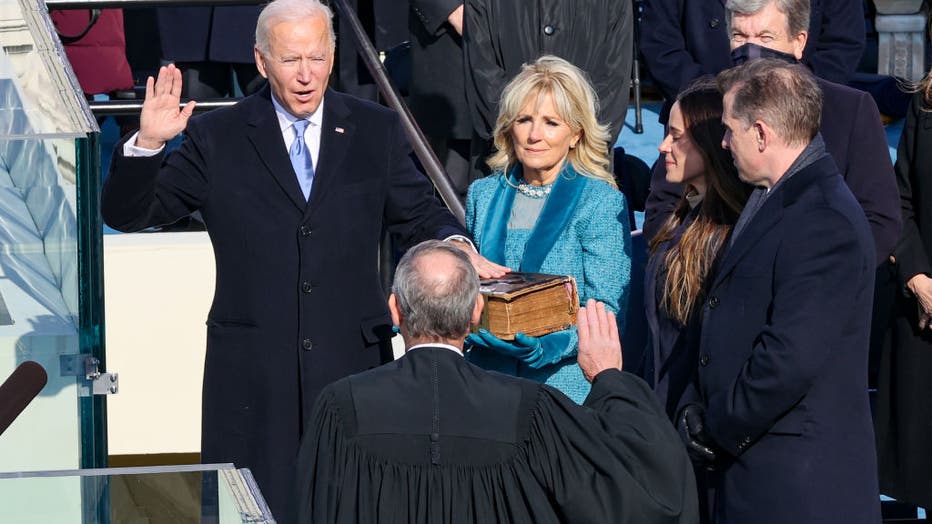 WASHINGTON, DC - JANUARY 20: Joe Biden is sworn in as U.S. President during his inauguration on the West Front of the U.S. Capitol on January 20, 2021 in Washington, DC. During today's inauguration ceremony Joe Biden becomes the 46th president of the

"After a close review of recent Tweets from the @realDonaldTrump account and the context around them – specifically how they are being received and interpreted on and off Twitter – we have permanently suspended the account due to the risk of further incitement of violence," Twitter said.

Later, when the president shared three messages from the official @POTUS handle, Twitter quickly took them down.

In his first hours as president, Biden is set to sign a series of executive actions that reverse his predecessor’s orders on immigration, climate change and handling of the coronavirus pandemic.

Biden on Wednesday will end construction on Trump’s U.S.-Mexico border wall, end the ban on travel from some Muslim-majority countries, rejoin the Paris Climate Accord and the World Health Organization and revoke the approval of the Keystone XL oil pipeline, aides said Tuesday. The new president will sign the orders almost immediately after taking the oath of office at the Capitol, pivoting quickly from his pared-down inauguration ceremony to enacting his agenda.