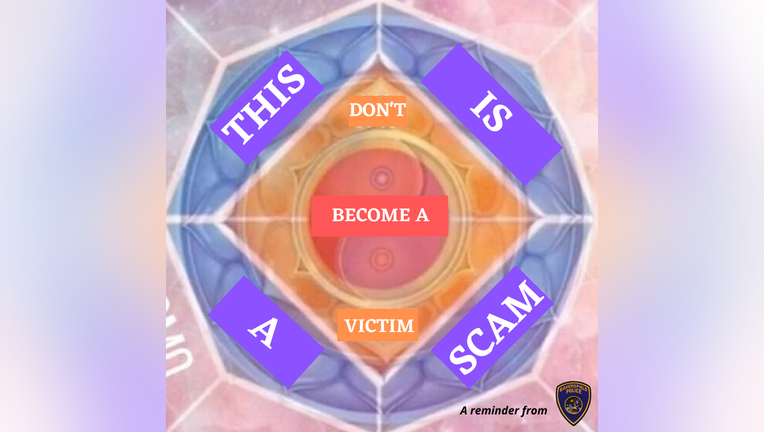 Police in California are warning the public of the re-emergence of an online scam known as “The Circle Game,” which asks people to pay an “entry fee” in order to play. (Bakersfield Police Department)

LOS ANGELES - Police in California are warning the public of the re-emergence of an online scam known as “The Circle Game,” which asks people to pay an “entry fee” in order to play.

Otherwise known as the “Mandala Game,” “Blessing Circle,” or “Loom Circle,” the “games” request an entry fee while promising payouts from new members that players recruit.

How to avoid COVID-19 scams

Here are ways that can help stop you from being swindled.

According to the Bakersfield Police Department, the most recent version of the scheme promises an $800 return on a $100 investment.

Once enough people are recruited and enough money is sent to the game’s founding member, the “system collapses and people lose money,” according to the police department.

“Not only will you lose money, this activity is also illegal in the U.S. and many other countries,” police added.

RELATED: FCC warns consumers to be aware of COVID-19 phone and text scams

Authorities in Bakersfield said they have not had any reports of victims of the scam, but a Utah woman reportedly paid a $100 buy-in this month with the prospect of an $800 if she was able to recruit more people, according to KUTV.

The woman told KUTV that she was told to send money through Venmo in order to join the group and was tasked with recruiting more people in order to make the money that was promised to her.

She said she messaged friends on social media to join but dropped out once she began to feel uneasy.