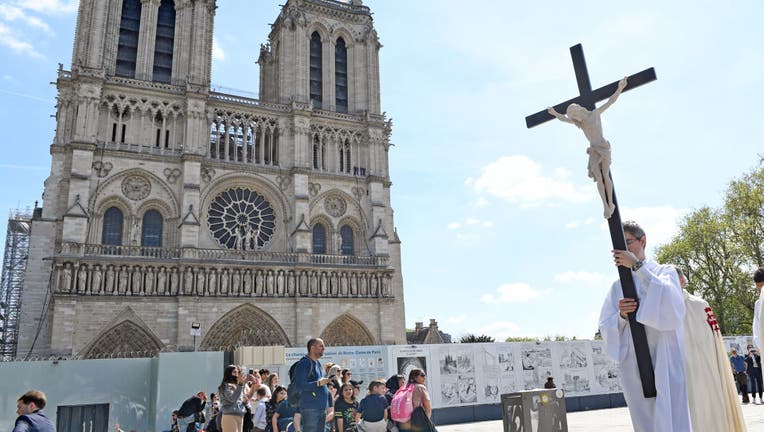 A Catholic cleric carries a wooden cross during the Good Friday celebrations and the third anniversary of the Notre-Dame fire in front of the Notre-Dame Cathedral in Paris, France on April 15, 2022. (Photo by Jiro Mochizuki/Anadolu Agency via Getty I

PARIS - On the third anniversary of the Notre Dame Cathedral fire, which also falls on the Christian holiday of Good Friday, the race to reconstruct the Paris landmark continues — as well as the investigation into the exact cause of the flames.

Notre Dame, a monument that has withstood centuries of wars and revolutions, was ravaged by a massive fire on April 15, 2019, as it was undergoing renovations. The flame tore through the cathedral’s roof, knocked down its spire, and threatened to bring the rest of the medieval monument down too, as the rest of the world watched in horror.

French President Emmanuel Macron on Friday visited the Notre Dame Cathedral to mark the anniversary, wearing a hard hat and taking a tour to see recent developments at the site.

Authorities hope to have Notre Dame open to visitors and religious services in 2024, the year Paris hosts the Olympics. But with the onset of the COVID-19 pandemic and safety rules over the presence of lead that was melted or dispersed in the fire, workers have faced difficult conditions and interruptions.

In September 2021, the cathedral was finally deemed stable and secure enough to start reconstruction, and work on the spire started in December.

Carpenters, scaffolding experts, professional climbers, organ mechanics and others have been taking part in the effort, which included special temporary structures to secure the iconic towers, vaults and walls of the huge roofless structure, and a special "umbrella" to protect it from the weather.

"It’s not simple," Monsignor Patrick Chauvet, who is rector of Notre Dame, said on Dec. 24 of the work. But Chauvet added that the cathedral would recover.

A look back at the Notre Dame Cathedral fire

Ever since the French landmark was engulfed in flames that destroyed much of the structure's roof and felled its spire on April 15 last year, construction workers have toiled tirelessly to save the 13th-century relic by President Emmanuel Macron's promised five-year timeline.

In February, officials said the "safety phase" had been completed and that preliminary operations were already underway, including the cleaning of the interior of the cathedral.

The Établissement Public, the public agency in charge of managing the restoration, said at the time it would be sourcing companies "over the next few months" with expertise in the restoration of historical monuments to help.

As far as ongoing work on the cathedral’s new spire and transept roof, officials said 1,000 oak trees had been selected and later processed into timbers.

"Little by little, each oak is stripped of its bark and cut into 36 cm sections for planking," Friends of Notre Dame Paris said in an update.

Officials were aiming for the timbers to be transported to carpenters’ workshops by the middle of this year, to be assembled on a trial basis before the final assembly on site in 2023.

Construction on Notre Dame — French for "Our Lady" — began in the 12th century and continued for nearly 200 years.

It sustained damage and fell into neglect during the French Revolution, but received renewed attention following the 1831 publication of Victor Hugo’s novel "The Hunchback of Notre-Dame." This led to two decades of restorations, including the cathedral’s famous flying buttresses and a reconstructed spire.

While most kings were crowned elsewhere, Napoleon Bonaparte made sure he was crowned there in 1804, and married there in 1810.