The maker of Lysol and another disinfectant says its products should not be used as an internal treatment for the coronavirus.

WASHINGTON (AP) - President Donald Trump's raising of unproven, even far-fetched ideas for fighting COVID-19 -- including his latest musing about injecting disinfectants into people -- triggered an outcry from health officials everywhere on Friday. It also highlighted his unconventional approach to the special responsibility that comes with speaking from the presidential pulpit.

Trump readily admits he's not a doctor. Yet with the reported U.S. death toll from the virus topping 50,000, he continues to use the White House podium to promote untested drugs and float his own ideas for treatment as he tries to project optimism.

“He’s like the family member around the dinner table that doesn’t have a grasp of what reality is and is willing to speak with confidence despite it," said Julian Zelizer, a presidential historian at Princeton University. He said Trump likes to provocatively push the boundaries because he thinks that appeals to his political supporters.

“But in this case it’s the president of the United States and it’s dangerous," Zelizer said.

Trump's offhand comment Thursday wondering if disinfectants could be injected or ingested to fight COVID-10 got intense blowback from doctors and other health officials on Friday. It also prompted blunt warnings from the makers of popular commercial products.

"We must be clear that under no circumstance should our disinfectant products be administered into the human body (through injection, ingestion or any other route),” said a statement from the parent of the company that makes Lysol and Dettol, Reckitt Benckiser.

“Bleach and other disinfectants are not suitable for consumption or injection under any circumstances" declared the Clorox Co.

The White House said the president's comments had been misrepresented by the media, and Trump said he had been speaking sarcastically. But a transcript of his remarks suggested otherwise.

He had noted at a Thursday briefing that research was underway into the effect disinfectants have on the virus and wondered aloud if they could be injected into people. “Is there a way we can do something like that, by injection inside or almost a cleaning?” Trump asked. “Because you see it gets in the lungs and it does a tremendous number on the lungs. So it would be interesting to check that.”

Don't try that at home, others quickly warned.

The U.S. Surgeon General’s office tweeted a reminder to all Americans: “PLEASE always talk to your health provider first before administering any treatment/ medication to yourself or a loved one."

“It’s sad when you have to correct the president of the United States on a matter of science and health," said New York Mayor Bill De Blasio."

Indiana Sen. Mike Braun, who campaigned as a strong Trump supporter in 2018, said, “Sometimes when you’re not clear with how you say things, especially when you are at a high level where people watch, its best probably not to venture into areas that you may not know a lot about."

Trump, whose daily COVID briefings often stretch 90 minutes or longer, abruptly ended Friday’s appearance after only about 20 minutes and without answering questions. He did take questions earlier.

RELATED: Coronavirus cleaners: These products will kill COVID-19, according to the EPA

Many Americans apparently were taking Trump's comments as more than sarcastic.

After receiving more than 100 calls to its hotline, the Maryland Emergency Management Agency tweeted this alert: “This is a reminder that under no circumstances should any disinfectant product be administered into the body through injection, ingestion or any other route.”

Dr. Mona Hanna-Attisha, who helped expose the Flint, Michigan, contaminated water scandal in 2015, said she routinely gives out the Poison Control hotline number during pediatric visits. In light of the president's comments, “It seems the entire country needs it now,” she tweeted. "The phone number to Poison Control is 1-800-222-1222.'” 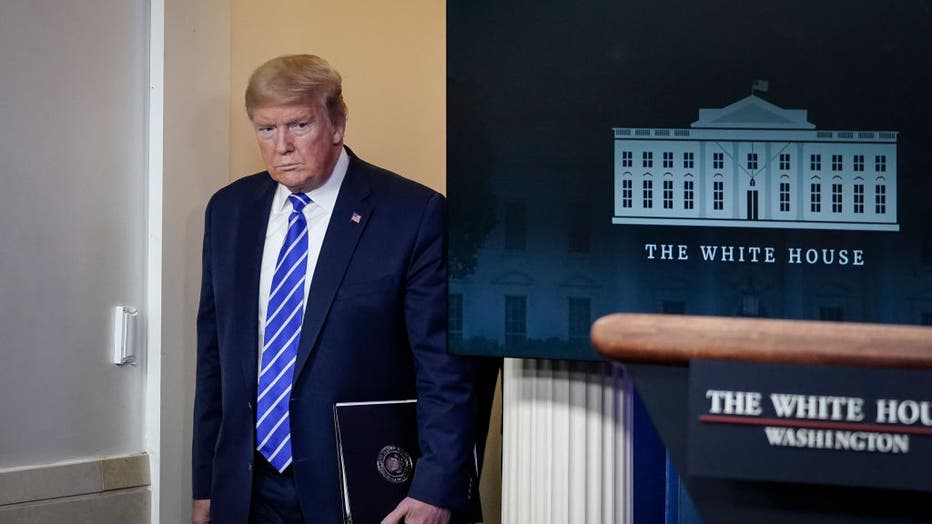 President Donald Trump arrives for the daily briefing of the coronavirus task force at the White House on April 23, 2020 in Washington, DC. (Photo by Drew Angerer/Getty Images)

Speaking to reporters in the Oval Office on Friday, Trump insisted his comments were misconstrued. “I was asking the question sarcastically to reporters like you, just to see what would happen,” he said.

However, “People expect presidents to speak with authority all the time,” said Edward Frantz, a presidential historian at the University of Indianapolis. “You can’t pick and choose the times as president when you are going to act presidential ... and then say to the public, ’You’re supposed to understand I was being sarcastic.'"

Trump’s imprecise language, hyperbole and outright mistruths in public statements throughout his presidency have been without precedent, said Frantz, who has researched Republican presidents from Abraham Lincoln to Ronald Reagan. 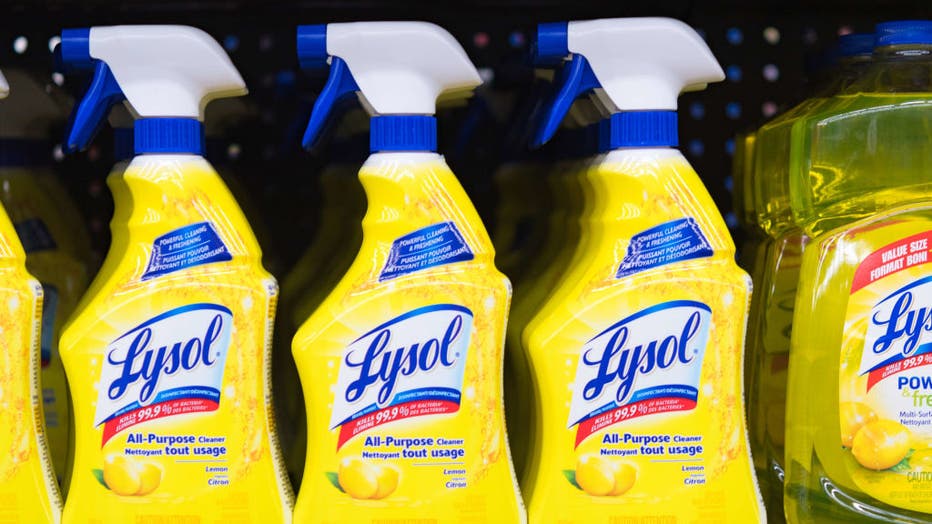 ”Even before Trump attempted to walk back his comments on Friday, White House press secretary Kayleigh McEnany sought to brush them off as the president faced a deluge of criticism.

“President Trump has repeatedly said that Americans should consult with medical doctors regarding coronavirus treatment, a point that he emphasized again during yesterday’s briefing,” McEnany said.

Dr. Deborah Birx, coordinator of the White House coronavirus task force, defended Trump as merely thinking aloud about what he was hearing at the briefing.

“He was riffing,” said Jason Miller, who served as communications director to Trump’s 2016 campaign. “He wasn’t, saying, ‘Go and pump Lysol into your veins.’ But when you riff from the podium, it allows other people to define what your intent was.”

"I can’t believe I have to say this, but please don’t drink bleach," tweeted Joe Biden, the Democrats' presumptive presidential nominee.

Actually, the idea to ingest a type of disinfectant has a history.

During the influenza pandemic of 1918 — the year that Trump’s paternal grandfather, Friedrich Trump, died of the flu — doctors gave patients a rash of unusual treatments to treat their symptoms, according to medical journals at the time.

One doctor advocated a boric acid and sodium bicarbonate (baking soda) powder be sniffed up the nose to rinse out nasal passages. Others prescribed quinine, strychnine and a poisonous garden plant called Digitalis to help circulation, and drugs derived from iodine for “internal disinfection,” according to author Laura Spinney, who wrote a 2017 book on the pandemic entitled “Pale Rider, The Spanish Flu of 1918 and How it Changed the World.”

Thursday wasn't the first time the president has talked up prospects for new therapies or offered rosy timelines for the development of a vaccine. He has repeatedly promoted the drug hydroxychloroquine as a potential “game changer” in the fight against the virus.

Last month, the FDA authorized limited use of the malaria drug for hospitalized patients with COVID-19 who aren’t enrolled in ongoing research. Studies have found reports of serious side effects, including dangerous irregular heart rhythms, and deaths among patients.

On Friday, however, the Food and Drug Administration warned that people should not take chloroquine and hydroxychloroquine to treat COVID-19 outside of a hospital or formal clinical trial, citing reports of “serious heart rhythm problems.”

The White House also has pitched "emerging” research on the benefits of sunlight and humidity in diminishing the threat of the virus. Past studies have not found good evidence that the warmer temperatures and higher humidity of spring and summer will help tamp down the spread of the virus.

Ultraviolet light is used for disinfecting masks and other medical equipment but has not been shown to be safe or effective for use on people to try to eliminate a virus, said Dr. Rais Vohra, an emergency medicine doctor at the Fresno branch of the University of California, San Francisco.

“For inanimate objects, it does make sense,” but exposing yourself to ultraviolet light outside or from other sources can raise the risk of skin cancer, he said.