NATO's Jens Stoltenberg discusses plans to send troops to member countries in the region, a decision made during an online summit of top NATO leaders.

Speaking after chairing a NATO summit, Secretary General Jens Stoltenberg said the 30-nation organization will send parts of the NATO Response Force and elements of a quickly deployable spearhead unit to the alliance’s eastern flank. It’s the first time the force has been used to defend NATO allies.

Stoltenberg did not say how many troops would be sent or where they might go, but he did confirm that the move would involve land, sea and air power.

In response to Europe’s biggest security crisis in decades, Stoltenberg said, "We are now deploying the NATO Response Force for the first time in a collective defense context. We speak about thousands of troops. We speak about air and maritime capabilities."

"There must be no space for miscalculation or misunderstanding. We will do what it takes to protect and defend every ally, and every inch of NATO territory," he said.

The NRF can number up to 40,000 troops, but Stoltenberg said that NATO would not be deploying the entire force. Parts of a spearhead unit known in NATO jargon as the Very High Readiness Joint Task Force, which is currently led by France, will also be sent. 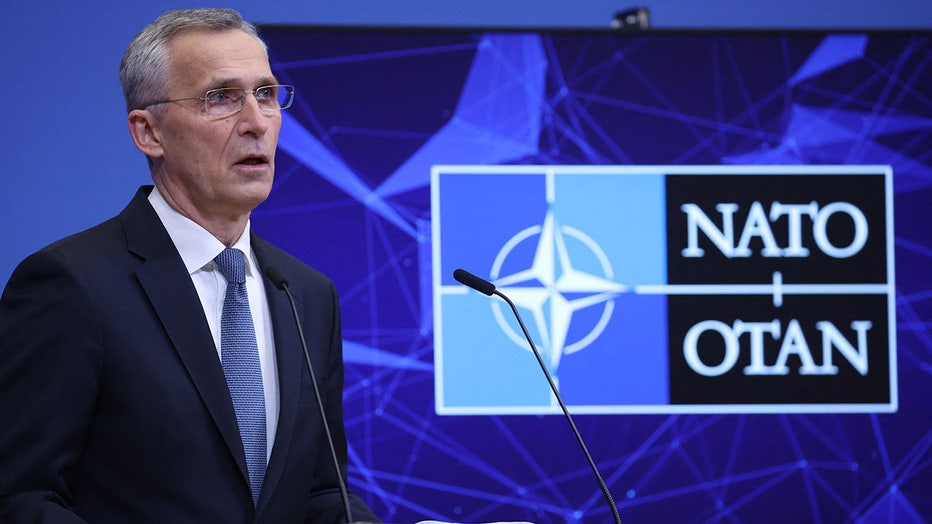 NATO Secretary General Jens Stoltenberg speaks during a press conference after a NATO video summit on Russia invasion of Ukraine at the NATO headquarters in Brussels on February 25, 2022. (Photo by KENZO TRIBOUILLARD/AFP via Getty Images)

The announcement came after NATO members, ranging from Russia’s neighbor Estonia in the north down around the west of conflict-hit Ukraine to Bulgaria on the Black Sea coast, triggered urgent consultations Thursday about their security amid concerns from the invasion.

"We will continue to take all measures and decisions required to ensure the security and defense of all allies," the leaders said in a statement. "We will make all deployments necessary to ensure strong and credible deterrence and defense across the alliance, now and in the future."

The world’s biggest security organization previously had around 5,000 troops stationed in the Baltic countries — Estonia, Latvia and Lithuania — and Poland, but has significantly beefed up its defenses over the past three months.

Some of NATO’s 30 member countries are supplying arms, ammunition and other equipment to Ukraine, but NATO as an organization isn’t. It won’t launch any military action in support of Ukraine, which is a close partner but has no prospect of joining.

The Baltic members, however, have said the West should "urgently provide Ukrainian people with weapons, ammunition and any other kind of military support to defend itself as well as economic, financial and political assistance and support, humanitarian aid."

Russian invasion: Doctors scramble to save lives amid explosions | LiveNOW from FOX

Doctors in Ukraine are rushing to assist civilians impacted by the Russian invasion. Oleksandr Zakharchuk, co-founder of Justpoint and Ukraine-native, has been in communication with 50 doctors in Ukraine that say the needs of the Ukranian people are high.

NATO began beefing up its defenses in northeastern Europe after Russia annexed Ukraine’s Crimean Peninsula in 2014. Recently, some members have also sent troops, aircraft and warships to the Black Sea region, near allies Bulgaria, Romania and Turkey.

Short-term, NATO has also activated an emergency planning system to allow commanders to move forces more quickly. The Pentagon said Thursday that it is sending 7,000 troops to Europe in addition to 5,000 recently deployed personnel.

NATO surveillance aircraft have begun patrols inside allied territory. The planes would be able to watch Russian fighter jet and transport movements inside Ukraine, much as they monitored aircraft in Syria from Turkey’s airspace.

RELATED: Who is the 'Ghost of Kyiv'? Tale of Ukrainian fighter pilot trends on social media

Lithuania declared a state of emergency Thursday. It borders Russia’s Kaliningrad exclave to the southwest, Belarus to the east, Latvia to the north and Poland to the south.

The Baltic country's move allows for a more flexible use of state reserve funds and increased border protection, giving border guards greater authorities to stop and search individuals and vehicles in border areas.

"There must be no space for miscalculation or misunderstanding. We will do what it takes to protect and defend every Ally, and every inch of NATO territory," Stoltenberg said. 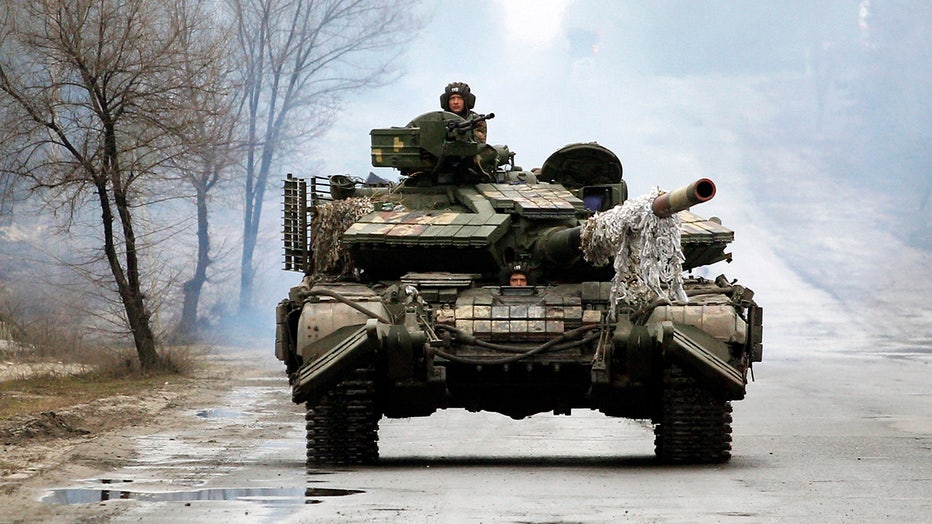 Ukrainian servicemen ride on tanks towards the front line with Russian forces in the Lugansk region of Ukraine on February 25, 2022. (Photo by ANATOLII STEPANOV/AFP via Getty Images)

As the leaders prepared for their virtual summit, pro-Ukraine demonstrators rallied outside NATO’s headquarters in Brussels. Dozens of Ukrainians living in the Belgian capital chanted "Putin, Terrorist," "Close the Sky Down" and "Stop Putin, Stop War."

"We are fighting for the whole democratic world here. If we don’t stop them in Ukraine, they will go next to the European Union. They will be at your door," said Artemii Sattarov, draped in a Ukrainian flag. That is why we are asking here to close the (airspace), to provide military help to Ukraine."