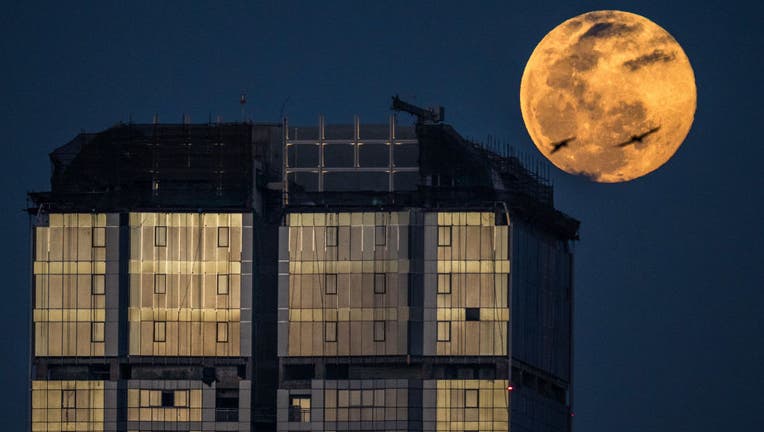 FILE IMAGE - Super worm moon rises in the sky over the high-rise tower seen from Parel, on March 9, 2020, in Mumbai, India. (Photo by Pratik Chorge/Hindustan Times via Getty Images)

March’s full moon — called the "worm moon" — is set to reach peak illumination early Friday and will be the last full moon of winter 2022.

The full moon will rise on Thursday night, and if the weather isn’t ideal, it will also appear full on Friday evening as well, according to the Farmer’s Almanac.

Here’s what you need to know about seeing March’s full moon:

The final full moon of winter 2022 will reach peak illumination at 3:20 a.m. ET on Friday, March 18, the Farmer’s Almanac said.

This falls just two days before the spring equinox, which marks the official start of spring in the Northern Hemisphere on Sunday, March 20.

For those who don’t want to get up in the middle of the night, skywatchers can also see the spectacularly bright full moon as it rises above the horizon on Thursday evening.

Why is March’s full moon called the worm moon?

March’s full moon goes by the name worm moon, which has often been thought to describe the earthworms that appear as the soil warms in the spring and invites birds to feed.

But according to the Farmer’s Almanac, there may be another, more specific origin.

"In the 1760s, Captain Jonathan Carver visited the Naudowessie (Dakota) and other Native American tribes and wrote that the name Worm Moon refers to a different sort of ‘worm’—beetle larvae—which begin to emerge from the thawing bark of trees and other winter hideouts at this time," the Farmer’s Almanac states.

May's full moon and a lunar eclipse coincided on May 26, to create a phenomenon known as a "super flower blood moon." Credit - Declan Bowring via Storyful

Look for a possible ‘moonbow’

For those who may have rain in the forecast on Thursday, March 17, the Farmer’s Almanac noted how they may even get to see a rare phenomenon called a moonbow.

"A moonbow is just like a solar rainbow, but is created by moonlight (rather than sunlight) when it is refracted through water droplets in the air. Moonbows only happen when the full Moon is fairly low in the sky, so look for one in the hours after sunset when the sky is dark," the periodical said.