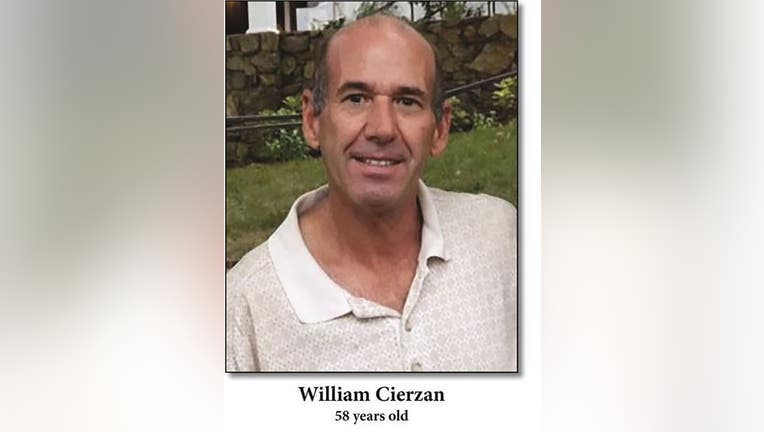 SAN FERNANDO, Calif. - A 24-year-old man was charged with murdering his uncle on Tuesday, who disappeared from his Santa Clarita-area home about 31/2 years ago.

Daniel Cierzan is accused of killing 58-year-old William Cierzan at his uncle's house and then disposing of the body, according to the District Attorney's Office.

The victim's wife, Linda, spoke with her husband by phone while he was cooking dinner at about 4 p.m. on Jan. 26, 2017, and found him gone when she arrived home about three hours later, according to the Los Angeles County Sheriff's Department.

William Cierzan's vehicle, wallet and cellphone were left behind, and family members reported him missing after being unable to find him.

Investigators later found blood inside the home, according to the sheriff's department, which said "his remains have not been located."

His nephew was arrested Friday, according to the sheriff's department.

Authorities did not disclose a motive for the killing of the victim, a Magic Mountain employee who enjoyed golfing and collecting Coca-Cola memorabilia.

The city of Santa Clarita and an anonymous source had offered a $20,000 reward for information leading to the apprehension and/or conviction of anyone responsible for his disappearance.

The defendant, who is set to be arraigned Sept. 25 the San Fernando courthouse, could face up to 25 years to life in state prison if convicted as charged, according to the District Attorney's Office.