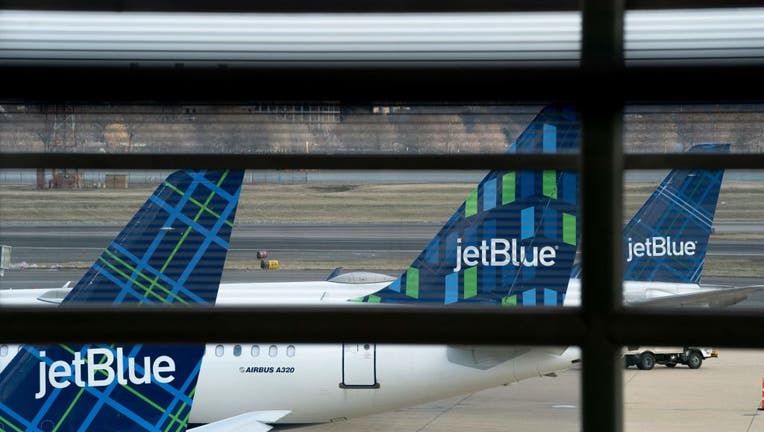 JetBlue planes sit at Ronald Reagan Washington National Airport in Arlington, Virginia, on January 18, 2022. - The chief executives of the largest US airlines warned of a "catastrophic disruption" to travel and shipping operations if telecommunicatio

BUFFALO, N.Y. - A JetBlue pilot was removed from the cockpit of a plane before departure on Wednesday after Transportation Security Administration agents noticed that he appeared impaired.

The JetBlue plane was about to depart from Buffalo Niagara International Airport on Wednesday when Niagara Frontier Transportation Authority police removed James Clifton, 52, from the flight after TSA agents alerted them of the possibly impaired pilot, according to The Buffalo News.

TSA agents noticed that Clifton could have been impaired while he was passing a security checkpoint at the airport.

NFTA police gave Clifton a breathalyzer test, and he was recorded with a blood-alcohol level of 0.17%, which is over four times Federal Aviation Administration standards for pilots, according to the report.

An American Airlines flight headed to Orange County, California, was forced to divert to Denver, Colorado, after a passenger allegedly attacked one of the flight attendants. The passenger, who reportedly punched the flight attendant in the nose, was arrested when the plane landed in Denver.

The flight's scheduled destination was Fort Lauderdale, Fla., according to the report.

Following the breathalyzer test, Clifton was taken into police custody before being released to JetBlue security.

Clifton could face federal charges after the incident, the NFTA told The Buffalo News.

A JetBlue spokesperson told FOX Business that the crew member involved in the incident "has been removed from his duties."

"The safety of JetBlue’s customers and crewmembers is our first priority.  We adhere to all DOT rules and requirements concerning alcohol at all times and have a very strict zero tolerance internal alcohol policy. We are aware of the incident that occurred this morning in Buffalo and are cooperating fully with law enforcement. We are also conducting our own internal investigation.  The crewmember involved has been removed from his duties," the spokesperson said.