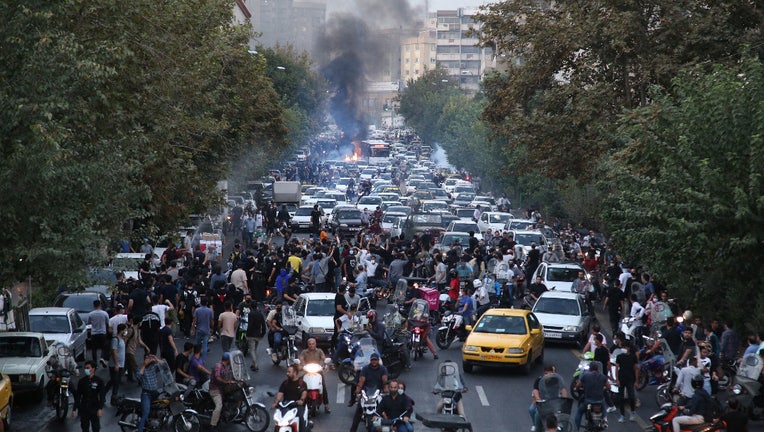 A picture obtained by AFP outside Iran on September 21, 2022, shows Iranian demonstrators taking to the streets of the capital Tehran during a protest for Mahsa Amini, days after she died in police custody. - Protests spread to 15 cities across Iran

An Iranian lawmaker said Sunday that Iran's government is "paying attention to the people’s real demands," state media reported, a day after a top official suggested that the country’s morality police whose conduct helped trigger months of protests has been shut down.

The role of the morality police, which enforces veiling laws, came under scrutiny after a detainee, 22-year-old Mahsa Amini, died in its custody in mid-September. Amini had been held for allegedly violating the Islamic Republic’s strict dress codes. Her death unleashed a wave of unrest that has grown into calls for the downfall of Iran's clerical rulers.

Iran's chief prosecutor Mohamed Jafar Montazeri said on Saturday the morality police "had been closed," the semi-official news agency ISNA reported. The agency did not provide details, and state media hasn't reported such a purported decision.

In a report carried by ISNA on Sunday, lawmaker Nezamoddin Mousavi signaled a less confrontational approach toward the protests.

"Both the administration and parliament insisted that paying attention to the people’s demand that is mainly economic is the best way for achieving stability and confronting the riots," he said, following a closed meeting with several senior Iranian officials, including President Ebrahim Raisi.

Mousavi did not address the reported closure of the morality police.

The Associated Press has been unable to confirm the current status of the force, established in 2005 with the task of arresting people who violate the country’s Islamic dress code.

Since September, there has been a reported decline in the number of morality police officers across Iranian cities and an increase in women walking in public without headscarves, contrary to Iranian law.

Montazeri, the chief prosecutor, provided no further details about the future of the morality police or if its closure was nationwide and permanent. However he added that Iran’s judiciary will ‘‘continue to monitor behavior at the community level.’’

In a report by ISNA on Friday, Montazeri was quoted as saying that the government was reviewing the mandatory hijab law. "We are working fast on the issue of hijab and we are doing our best to come up with a thoughtful solution to deal with this phenomenon that hurts everyone’s heart," said Montazeri, without offering details.

Saturday's announcement could signal an attempt to appease the public and find a way to end the protests in which, according to rights groups, at least 470 people were killed. More than 18,000 people have been arrested in the protests and the violent security force crackdown that followed, according to Human Rights Activists in Iran, a group monitoring the demonstrations.

Ali Alfoneh, a senior fellow at the Arab Gulf States Institute in Washington, said Montazeri’s statement about closing the morality police could be an attempt to pacify domestic unrest without making real concessions to protesters. 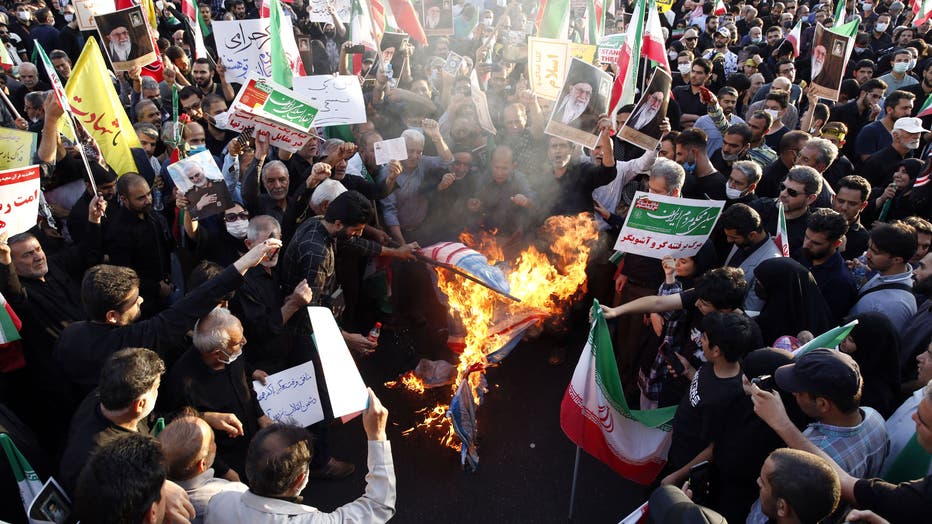 Iranian pro-government protesters burn flags of the US, Israel and Britain during a rally against the recent anti-government protests in Iran, in Tehran, on September 25, 2022. - (Photo by -/AFP via Getty Images)

‘‘The secular middle class loathes the organization (morality police) for restricting personal freedoms," said Alfoneh. On the other hand, the "underprivileged and socially conservative class resents how they conveniently keep away from enforcing the hijab legislation" in wealthier areas of Iran's cities.

When asked about Montazeri's statement, Iranian Foreign Minister Hossein Amirabdollahian gave no direct answer. ‘‘Be sure that in Iran, within the framework of democracy and freedom, which very clearly exists in Iran, everything is going very well,’’ Amirabdollahian said, speaking during a visit to Belgrade, Serbia.

The anti-government demonstrations, now in their third month, have shown no sign of stopping despite a violent crackdown. Protesters say they are fed up after decades of social and political repression, including a strict dress code imposed on women. Young women continue to play a leading role in the protests, stripping off the mandatory Islamic headscarf to express their rejection of clerical rule.

After the outbreak of the protests, the Iranian government hadn't appeared willing to heed the protesters' demands. It has continued to crack down on protesters, including sentencing at least seven arrested protesters to death. Authorities continue to blame the unrest on hostile foreign powers, without providing evidence.

But in recent days, Iranian state media platforms seemed to be adopting a more conciliatory tone, expressing a desire to engage with the problems of the Iranian people.