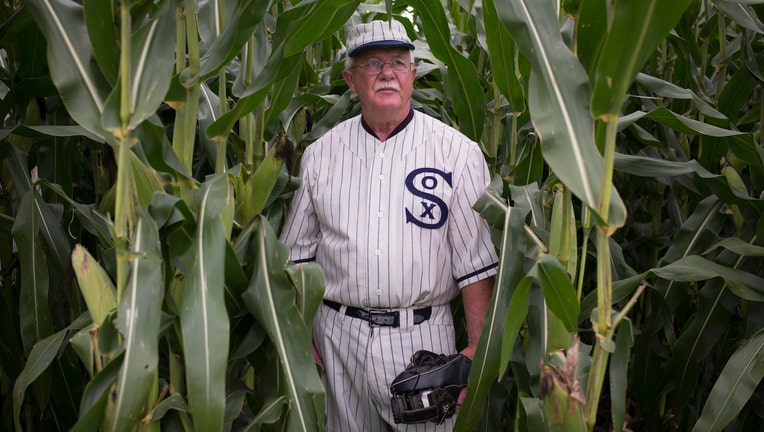 DYERSVILLE, IA - AUGUST 29: A look at life above Iowa on August 28, 2015 in Dyersville, IA. Field of Dreams is a 1989 American fantasy-drama film directed by Phil Alden Robinson and is from the novel Shoeless Joe by W. P. Kinsella. Now days a small g

CHICAGO - It turns out that "Field of Dreams" was right — if you build it, they will come.

This week, Major League Baseball will slide into Dyersville, Iowa for the first MLB game played in the state. Originally scheduled for August 2020, the delayed game — now set to feature a matchup between the Chicago White Sox and the New York Yankees — brings some of the league’s finest to a new park built to the north of the field made famous by the 1989 film.

But the Sox and Yankees aren’t the only players in town. For years, Dyersville’s Field of Dreams Movie Site has been home to the Ghost Players, an organization of local former baseball players who perform on the storied diamond.

Combining comedy with America’s Pastime, the Ghost Players entertain locals and tourists alike with a rambunctious live show that begins with an iconic image: the players in vintage Sox uniforms, emerging from the corn.

It’s a beautiful shot in Phil Alden Robinson’s film, but you can also experience the sight in "Ghost Player," director Joe Scherrman’s 2010 documentary about the team, which is currently streaming for free on Tubi.

"Ghost Player" gives viewers a chance to see the Field of Dreams as locals see it, but the best reason to watch the film has little to do with the field nor those distinctive uniforms. Instead, it’s a chance to understand the community created by the classic 1989 sports movie, one that has since traveled the globe, entertaining audiences and teaching kids the fundamentals of the game.

Baseball fans wishing to see players round the bases at the film’s actual site should consider streaming "Ghost Player" before the Field of Dreams game is played on Aug. 12. During the game itself, expect to see many a lovely overhead shot of the movie site, but the action will play out at the new stadium, which, unlike the Field of Dreams movie site, conforms to MLB standards.

The White Sox will play as the "home team" during the game, due to the team’s importance to the classic 1989 sports movie. In the film, Ray (Kevin Costner) builds the field after he hears a mysterious voice whisper, "If you build it, he will come."

After Ray creates his cornfield diamond, "Shoeless" Joe Jackson (played in the film by Ray Liotta) arrives, with other "ghost payers" from the infamous 1919 "Black Sox" team, one of several moments of magical realism in the film.

Dyersville’s Ghost Players, some of whom were extras in the movie, don’t need magic to appear. "The greatest show on dirt" returns to the Field of Dreams Movie Site on Aug. 21, but you can watch the fun for yourself at home, thanks to Scherrman’s engaging 47-minute documentary.

On Aug. 12, Major League Baseball comes to Dyersville, Iowa for the inaugural Field of Dreams game between the Chicago White Sox and the New York Yankees.

About the writer: Allison Shoemaker is a Chicago-based pop-culture critic and journalist. She is the author of "How TV Can Make You Smarter," and a member of the Television Critics Association and the Chicago Film Critics Association. She is also a producer and co-host for the Podlander Presents network of podcasts. Find her on Twitterand Instagram at @allisonshoe.