A homeless Florida man reportedly stole a machine from a construction site in Flagler County and took it on a joyride to Beverly Beach, leaving behind a "path of destruction," according to the Flagler County Sheriff's Office.

FLAGLER COUNTY, Fla. - A homeless Florida man reportedly stole a machine from a construction site in Flagler County over the weekend and took it on a joyride to Beverly Beach, leaving behind a "path of destruction," according to the Flagler County Sheriff's Office.

Deputies responded to N. Ocean Shore Boulevard around 8 a.m. Saturday after receiving a report of someone driving a large piece of construction equipment on a sidewalk. When law enforcement arrived to the area, they found 56-year-old Randy Wealand operating a JLG Lull alongside A1A.

"Where did you get it [construction equipment] from," a deputy is heard asking Wealand on body camera video. "From a rental shop," Wealand responded.

In the body camera video, Wealand could be heard telling the deputy that he was from Volusia County but came to the Flagler area for work.

"You realized you were hitting some things back there," the deputy asked. "Why are we driving this thing down the sidewalk?" "I can take it down the road. It would be a lot quicker," Wealand said.

An investigation revealed Wealand reportedly stole the $60,000 Lull from a construction site and took it about 2.5 miles south along A1A to Beverly Beach, running over two fire hydrants, a Charter Communications fiber node, resident mailboxes, and broke several sections of public sidewalk. Authorities said the damage he allegedly caused is believed to be more than $10,000. 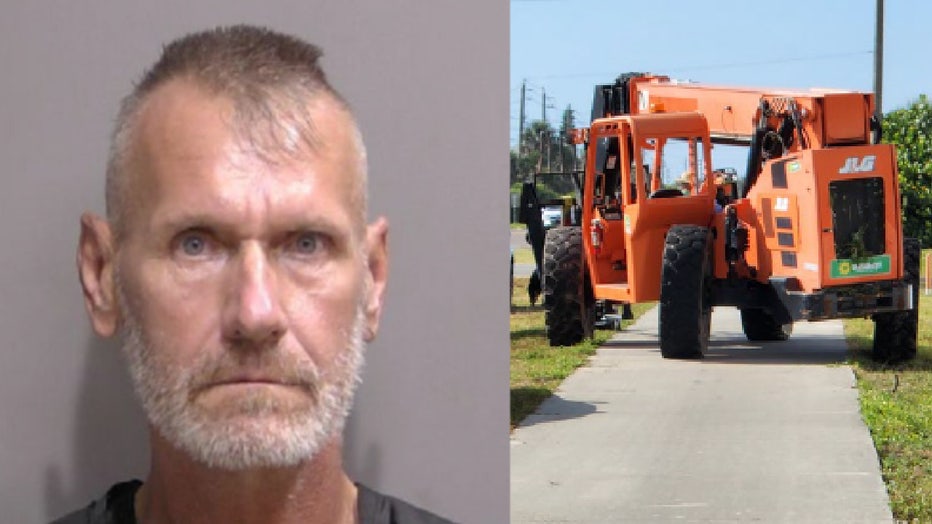 "Wealand would have caused more damage if he was not stopped and apprehended by deputies. Another win for ‘see something, say something, so a special thank you to the citizens who called us and helped prevent this dirtbag from continuing his dangerous path of destruction," Sheriff Rick Staly said in a statement.

According to authorities, Wealand has an extensive criminal history in both Florida and Pennsylvania, including felony convictions of grand theft auto, aggravated assault with a deadly weapon, and battery on a law enforcement officer.