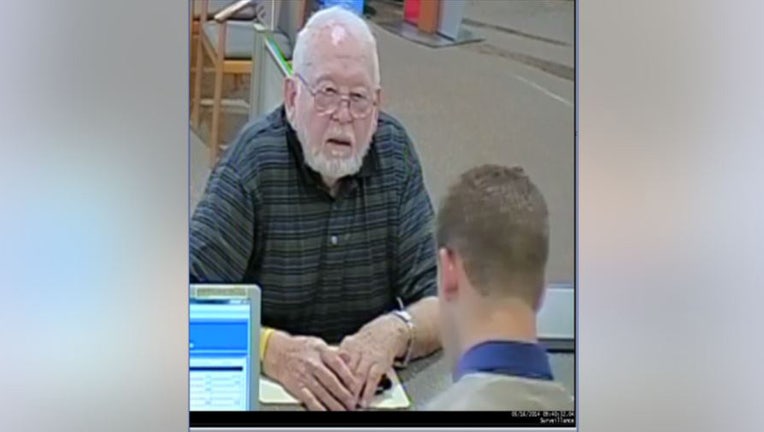 Donald Griffith depositing money to send to the scammers at a bank teller window. (FBI)

America’s grandparents are increasingly online. They’re connecting with relatives digitally, shopping in the web’s endless aisles, and even finding online love in their golden years.

However, with that wifi connection comes a darker side. Specifically, the danger of scams targeting the elderly population and their substantial life savings.

The Federal Bureau of Investigation (FBI) has raised the flag on the precipitous rise in elder fraud scams in recent years. According to their 2021 Internet Crime Complaint Center (IC3) report, there were over 92,000 victims who lost $1.7 billion to elder fraud scams. The losses were a 74 percent increase over 2020’s.

"Elder fraud is simply financial fraud that targets any individual, any citizen in the United States over the age of 60 years old," FBI Deputy Assistant Director of the Criminal Investigation Division Aaron Tapp told Fox News. "… It could be romance based. It could be technology based. But any type of fraud scheme that’s targeting our elderly population."

Tapp said the technological divide that separates sexagenarians from younger generations is at the heart of the rise in elder fraud. Scammers key in on individuals who are not digitally savvy to bilk them out of thousands of dollars. 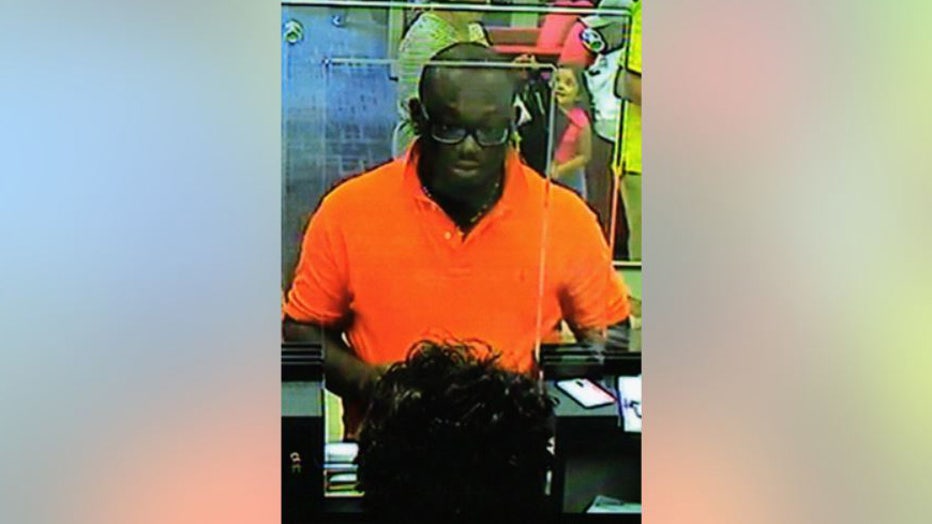 Babtunde Popoola at a bank teller window. Popoola was one of the scammers prosecuted for his role in defrauding Donald Griffith and others. (FBI)

SENIORS LIVING ON THE STREETS: RISING RENTS, INFLATION PUSH MORE ELDERLY PEOPLE OUT OF THEIR HOMES

"The technology is just a modality for these scammers to commit fraud," he said. "And so as the technology develops, they’ll use that modality in any way they can to prey upon the elderly population."

On average, victims lost over $18,000 and more than 3,000 victims lost over $100,000. The total among of money taken from victims has skyrocketed since 2017, when the FBI claims there was less than $400 million in total losses. The most common types of fraud in the report are tech support, non-payment/non-delivery, identity theft and romance scams. 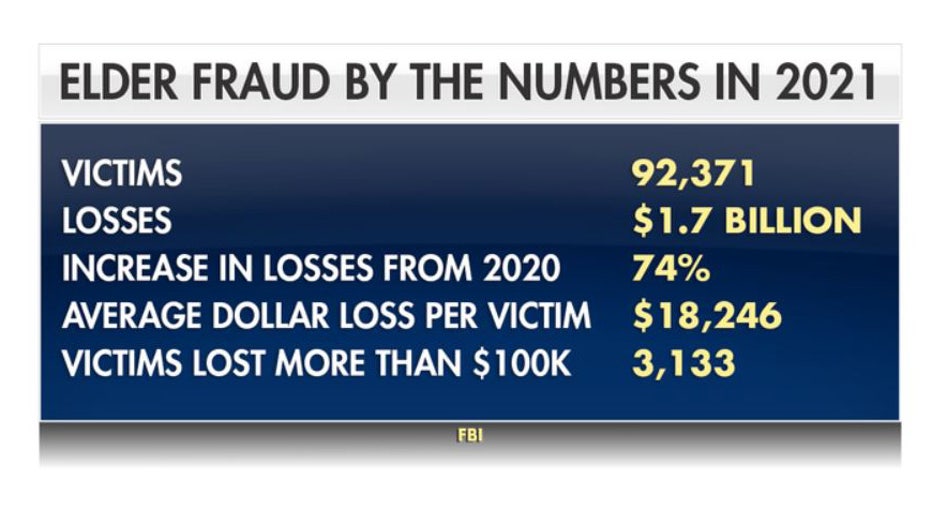 FBI statistics on elder fraud from their Internet Crime Complaint Center report in 2021.

One such victim of a romance scam was the late Donald Griffith, whose daughter Angie Kennard shared his story with Fox News in hopes of warning other families of the dangers of fraudulent online romances. Grifftih ran a construction business in the Washington D.C. area and helped build the regions metro transportation system.

"I think, you know, just being lonely, he turned to the internet and started looking around on dating sites and, you know, built a relationship with this person, Mary, online," Kennard told Fox News.

Kennard said this woman claimed she was working abroad in Europe and wound up trapped overseas. The scammers knew enough about her father to make "Mary" seem like she was keyed into Griffith’s interests and background as an owner of a construction firm.

"They’re very manipulative," she said. "They just really fed into my father’s background and who he was. And they made him fall in love. … It got to a point where they basically started turning my father against me, against my uncle, against his own family, saying that we just wanted his money."

The scammers targeted Griffith on a dating site and used his loneliness in his golden years against him. They started small and eventually drove him into debt after draining his life savings.

"Over time, she started asking him for money, and it started in small increments and then eventually, you know, worked its way up to … $40,000 at a time," Kennard said. "From what I can add up and find in terms of receipts and notes and statements, it looks like [he sent] about $750,000."

Kennard said the relationship her father had with Mary occurred entirely over text messages and emails, they never once spoke on the phone. Right away, she was concerned he was being scammed. But her concerns were met with resistance and even distance from Griffith, who taught her to be financially responsible in her youth. She said those lessons are why she was so shocked when she discovered the scam.

"It was finally when I went to go visit I ended up sneaking through his laptop and I went through his emails and financial statements and I saw the magnitude of what happened," Kennard said. "That’s when I contacted the FBI."

The agent who investigated Griffith’s case told Fox News that the people who targeted him were part of a Nigerian ring of scammers who defrauded hundreds of other victims out of upwards of $20 million in losses.

"We identified at least $22 million worth of money that flowed through all the financial accounts that we looked at," Special Supervisory Agent Keith Custer told Fox News. "So, hundreds of victims, hundreds of bank accounts and well over $20 million in losses."

Custer said elderly fraud is an international problem, with highly sophisticated and organized groups of scammers targeting America’s retirees from a number of foreign countries. He specifically named Ghana and Nigeria as hubs for high-tech swindles. The Nigerian ring that targeted Griffith was eventually tracked down and mostly apprehended.

"We indicted ten people in the initial round of indictments," Custer said. "So nine of those were guilty either at trial or through a plea bargain. One remains at large in Nigeria."

One additional scammer was eventually arrested for helping the crew launder the money through American bank accounts.

Despite the arrests, Kennard said she’s only received about $500 dollars of the $750,000 her father lost to these scammers. The FBI recently announced efforts to recompensate victims of elderly fraud. Since September 2021, the Bureau said it 150,000 fraud victims have cashed checks totaling $52 million as part of their larger efforts to get stolen money back into the accounts of the victims.

Of course, scammers need not log on to find some victims. For some, snail mail will do just fine.

"I received a call from Publishing Clearinghouse that I was the big winner for the year and that they would get back to me," Diane Schultz, a Wisconsin retiree, told Fox News. "… So when they called me back then they said that I had to come up with $39,000 to get the money out of Bank of America and to get the car to Wisconsin and all that."

The letters that Schultz received in the mail were from fraudsters posing as the direct marketing organization. Eventually they called her and managed to convince her she won $2 million and a free car from the company. She said she was going to give the money away to her church and the community’s public and parochial schools when she received it.

The money never came and Schultz was bilked out of over $200,000. She lost all of her retirement savings and tens of thousands of dollars she borrowed from family members. It only took five months for the scammers to clean her out.

"No money, everything is gone that I worked so hard for." Schultz said. "… When I couldn’t give them any [more] money, then they weren’t happy about it. They said, ‘Can’t you go someplace and get some more?’ It’s just like it continues on and on."

Recently, the AARP has decided to take action and help its members and older Americans fight against elder fraud with a recently-created hotline.

Nofziger said scammers know they’re targeting a target-rich environment with America’s retirees. The internet has opened wider avenues of fraud that criminals can use to steal from the country’s elderly population.

"The scammers, they’re manipulative, they’re like psychologists, they’re evil," Kennard said. "They’re really good at what they do, and they can just manipulate an older person’s mind very easily."