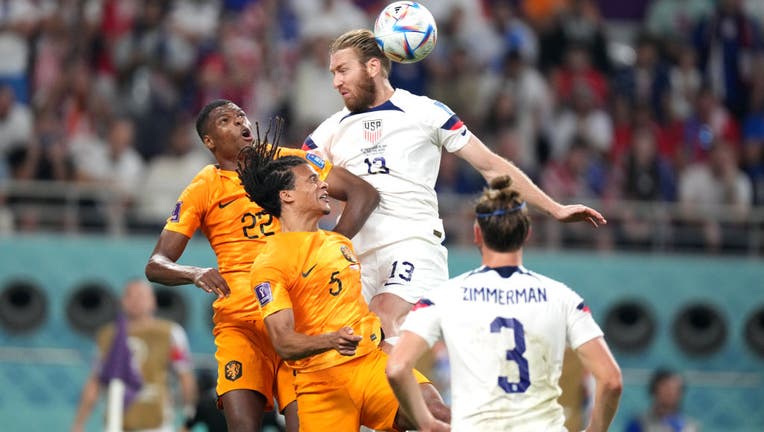 DOHA, QATAR - DECEMBER 03: Tim Ream of USA heads the ball against Nathan Ake and Denzel Dumfries of Netherlands ,during the FIFA World Cup Qatar 2022 Round of 16 match between Netherlands and USA at Khalifa International Stadium on December 3, 2022 i

LOS ANGELES - You know you are a super fan when it’s 3 a.m. and you're driving from Hesperia to Downtown LA to watch USA play for the FIFA World Cup. That’s exactly what Misty and her family did, and they were not alone.

The LA Galaxy Watch party at Tom’s Watch Bar was packed and in full swing by the time the game started at 7 a.m., with a line around the corner.

The echo of loud blow horns and cheering fans echoed around LA Live, even as Netherlands dominated.

RELATED: World Cup Saturday guide: US eliminated after 3-1 loss to the Netherlands

From the beginning, they quickly took the lead, but hopes shot up when USA scored a goal in the second half.

Even with 8 minutes remaining, and a 3-1 scoreboard favoring the Dutch team, people were screaming directions at the players on TV’s over their Bloody Mary’s and saying "we can do it".

But when it was all said and done, the Netherlands team walked away with the victory. Team USA was eliminated from the World Cup.

Many fans walked away sad, but are already looking ahead to four years from now when the World Cup is held in the US.