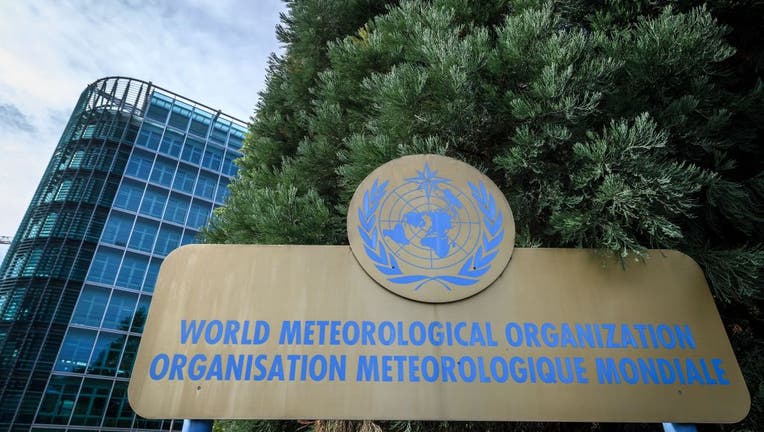 FILE - A sign of the World Meteorological Organization (WMO) is seen at the UN specialized agency's headquarters.

The annual global temperature average is expected to rise above pre-industrial levels by at least 1.64 degrees more each year for the next five years, according to the World Meteorological Organization.

Pre-industrial levels refers to the temperatures seen between 1850 and 1900, according to the WMO. The Earth’s average temperature is already 1.8 degrees above the pre-industrial period and the last five-year period has been the warmest on record.

“This study shows – with a high level of scientific skill – the enormous challenge ahead in meeting the Paris Agreement on Climate Change target of keeping a global temperature rise this century well below 2 degrees Celsius above pre-industrial levels and to pursue efforts to limit the temperature increase even further to 1.5 degrees Celsius,” said WMO Secretary-General Petteri Taalas.

There is also a 20% chance that the average global temperature will exceed the 1.5 degrees Celsius increase, which is 2.7 degrees Fahrenheit, in at least one of those five years, according to the WMO.

That figure is important because it is a target countries agreed to avoid hitting in the 2015 Paris climate agreement. The predictions take into account natural influences as well as human impact on the climate.

The forecast models have not, however, taken into account the changes in emissions of greenhouse gases and aerosols during the COVID-19 pandemic.

“WMO has repeatedly stressed that the industrial and economic slowdown from COVID-19 is not a substitute for sustained and coordinated climate action. Due to the very long lifetime of CO2 in the atmosphere, the impact of the drop in emissions this year is not expected to lead to a reduction of CO2 atmospheric concentrations which are driving global temperature increases,” said Taalas.

“Whilst COVID-19 has caused a severe international health and economic crisis, failure to tackle climate change may threaten human well-being, ecosystems and economies for centuries, Governments should use the opportunity to embrace climate action as part of recovery programmes and ensure that we grow back better,” he said.

Professor Adam Scaife, head of long-range prediction at the Met Office Hadley Centre, stated, “This is an exciting new scientific capability. As human-induced climate change grows, it is becoming even more important for governments and decision makers to understand the current climate risks on an annually-updated basis.”

One notable highlight from the predictions was that over the next five-year period, almost all regions, except for part of the southern oceans, were likely to become warmer than in the past.

Some impacts of the oncoming warming pattern may have already taken effect in the Arctic where the area has warmed by more than twice the global average.

Temperatures in the tropics of the Southern Hemisphere should expect little to no change, and regions in South America, southern Africa, as well as Australia will see significantly dryer conditions, according to the WMO.

The figures come less than a year after the U.S. started its withdrawal from the Paris climate agreement in November of 2019.

RELATED: COVID-19 shutdowns are clearing the air, but pollution will return as economies reopen

The climate agreement, which went into force Nov. 4, 2016, committed countries that signed the measure to take certain voluntary steps to reduce greenhouse gas emissions. The agreement was not legally enforceable and countries set their own emissions targets. The accord banned countries from announcing their intent to withdraw in its first three years.

The agreement set goals of preventing another 0.9 degrees (0.5 degrees Celsius) to 1.8 degrees (1 degree Celsius) of warming from current levels. Even the pledges made in 2015 weren't enough to prevent those levels of warming.

The deal calls for nations to come up with more ambitious pollution cuts every five years, starting in November 2020. Because of the expected withdrawal, the U.S. role in 2020 negotiations will be reduced, experts said.

Climate change, largely caused by the burning of coal, oil and gas, has already warmed the world by 1.8 degrees (1 degree Celsius) since the late 1800s, caused massive melting of ice globally, triggered weather extremes and changed ocean chemistry. And scientists say, depending on how much carbon dioxide is emitted, it will only get worse by the end of the century, with temperatures jumping by several degrees and oceans rising by close to 3 feet (1 meter).

FOX 5 DC contributed to this report.