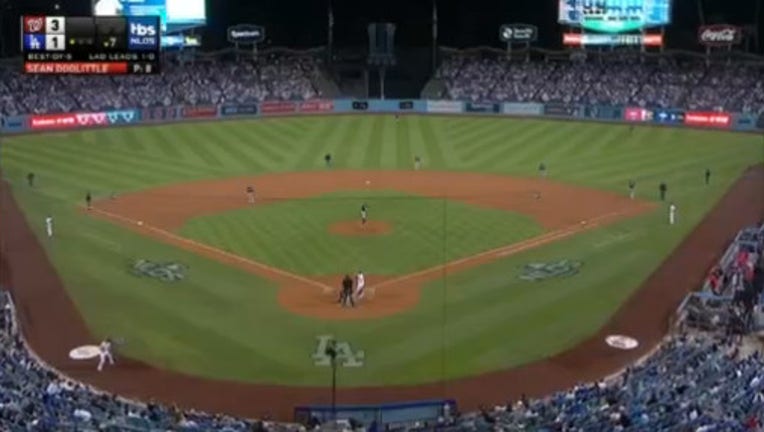 LOS ANGELES (FOX 11) - The Los Angeles Dodgers were held to five hits by Stephen Strasburg and three relievers in a 4-2 loss to the Washington Nationals
tonight at Dodger Stadium in Game 2 of a National League Division Series.

Strasburg allowed three hits and one run over the first six innings for the victory as the Nationals tied the best-of-five series at one game a
piece. He retied the first 14 Dodger batters before Will Smith singled with two outs in the fifth.

Strasburg struck out 10 and did not issue a walk. Washington scored once in the first and twice in the second off Clayton Kershaw.

The Dodgers cut the deficit to 3-2 on Max Muncy's solo homer with one out in the seventh. The Nationals added an insurance run in the eighth when Asdrubal Cabrera's one-out single drove in Ryan Zimmerman, who led off the inning with a double and moved to third on Victor Robles' sacrifice.

Washington reliever Daniel Hudson entered the game in the ninth, allowing a double to Justin Turner, the first batter he faced. He retired the next two batters, then intentionally walked Muncy to bring Smith to the plate, representing the tying run.

Smith walked on four pitches to load the bases. Corey Seager swung and missed on a 2-2 slider to end the game, the 17th strike out by the Nationals.

Game 3 is scheduled for Sunday in Washington.

Former Dodger Howie Kendrick singled in Trea Turner, who doubled to leading off the first, with the game's first run.

Washington increased its lead to 3-0 in the second. Robles, the leadoff batter, was hit by a pitch, moved to second on Strasburg's bunt and scored on Adam Eaton's two-out double. Anthony Rendon followed with a double, driving in Eaton.

Justin Turner drove in Matt Beaty with a sixth-inning sacrifice fly for the Dodgers first run. Beaty, pinch-hitting for Kershaw, singled with one out and moved to third on Joc Pederson's double.

Kershaw allowed three runs and six hits in six innings. He struck out four, walked one and hit two batters as his career postseason record dropped to 9-11. One batter he hit, Robles, later scored.