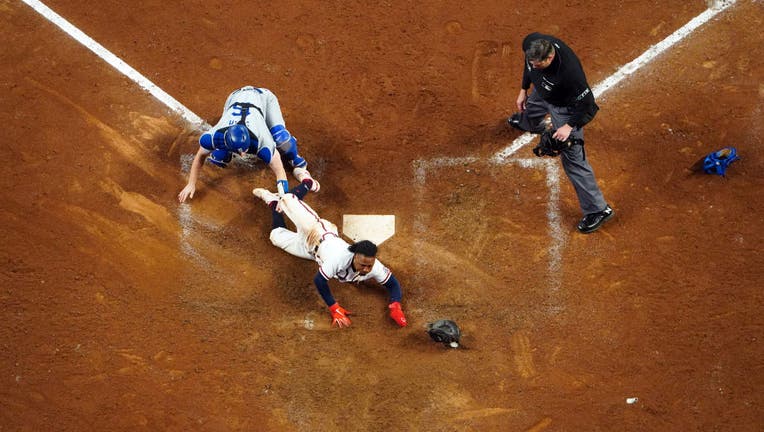 Ozzie Albies #1 of the Atlanta Braves slides home to score in the eighth inning of Game 2 of the NLCS between the Los Angeles Dodgers and the Atlanta Braves at Truist Park on Sunday, October 17, 2021 in Atlanta, Georgia. (Photo by Daniel Shirey/MLB P

ATLANTA - The Braves won with a walk-off hit for the second night in a row when Eddie Rosario lined a two-out single off shortstop Corey Seager’s glove, giving Atlanta a 5-4 victory over the Los Angeles Dodgers on Sunday night and a 2-0 NL Championship Series lead.

Atlanta twice rallied from two-run deficits before Rosario came up with his fourth hit of the game, a 105 mph scorcher up the middle on the first pitch after closer Kenley Jansen reliever. Seager tried for a backhand snag, and the ball went under his glove into the outfield.

Dansby Swanson raced around frm scond with the winning run, dropping his helmet as he crossed the plate, a virtual repeat of Game 1 when Austin Riley came through with a winning hit in the ninth for a 3-2 victory.

The series resumes on Los Angeles, where Game 3 is set for Tuesday night.

The Braves need two more victories for their first World Series appearance since 1999, but they can’t celebrate just yet.

A year ago, they held leads of 2-0 and 3-1 over the Dodgers in the NLCS, only to lose the last three games. Los Angeles went on to beat Tampa Bay in the World Series, while the Braves stewed for another shot.

They are halfway there after rallying in the eighth off Julio Urías, who pitched three hitless innings to finish Game 7 against the Braves last October.