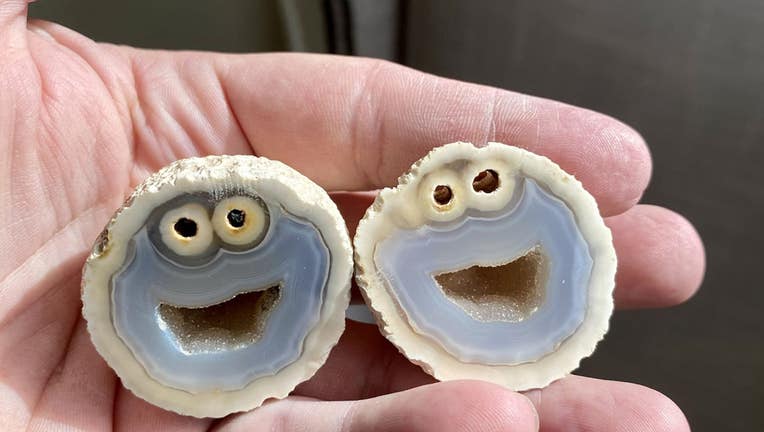 The agate was recovered from the Rio Grande do Sul region of Brazil by gemologist Lucas Fassari in November 2020. (Kennedy News Media)

An agate gemstone unearthed in Brazil has gone viral for its striking resemblance to Cookie Monster of "Sesame Street" fame.

A geologist in California says he's received multiple offers of $10,000 for the rare rock, which was recently discovered in Rio Grande do Sul, the New York Post reports. Owner Mike Bowers said he's been inundated with interest after showing off the volcanic rock on Facebook earlier this month, as the interior blue quartz crystals and smile-like void look just like the hungry monster.

"I didn't realize that Cookie Monster was so well known and part of the world cultural heritage!" Bowers told Live Science. "It is somewhat uncommon to find a face shape in agates," he explained, adding that the gemstone is even rarer because the face is a mirror image on both sides of the sliced stone.

According to the outlet, agates, a type of quartz, are formed within cavities of volcanic rocks. Their colors come from chemical impurities in silicon dioxide and how crystals are spaced.

The collector acquired the agate from a Brazilian gemologist, Lucas Fassari in November, who picked it up in Soledade, a hotspot for precious stones.

RELATED: Thief steals woman's car, then drives back to scold her for leaving 4-year-old son in vehicle

Despite the enticing offers, Bowers said he plans to hang on to the remarkable rock for now.

"It is totally unique and awesome to see everyone loving this stone as much as we do," he said.

The gemstone went viral when Jacqueline Antonovich, a professor and historian at Muhlenberg College, posted a photo to Twitter over the weekend in a post that's gone viral with over half a million likes. Soon after, even the blue beast himself chimed in.