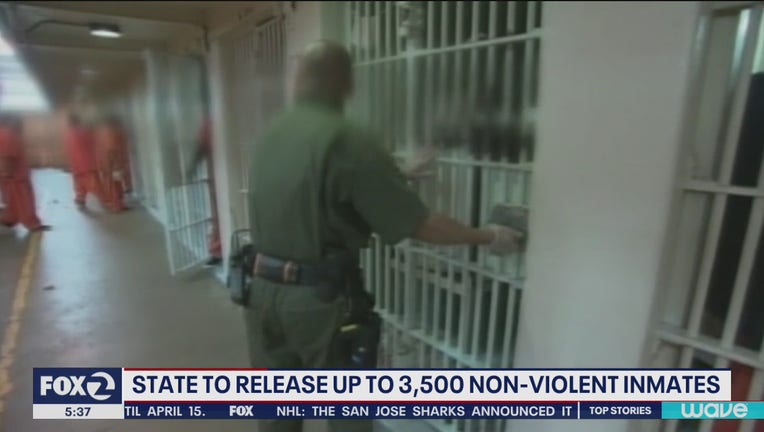 SACRAMENTO, Calif. - California is planning to release within days as many as 3,500 inmates who were due to be paroled in the next two months as it tries to free space in cramped prisons in anticipation of a coronavirus outbreak, state officials said Tuesday.

The move comes a week after Gov. Gavin Newsom halted intakes from jails, a move projected to lower the prison’s population by about 3,000 inmates in the next 30 days.

The combination is edging closer to the drop of at least 10,000 inmates that advocates say is a baseline for creating enough space particularly in crowded dormitories so that prisoners have a chance to maintain a safe social distance like the rest of the state’s population.

Most people with the virus experience mild or moderate fever and coughing that clear up in two to three weeks. Some, especially older adults and people with existing health problems, can face severe illness, including pneumonia and death.

The 3,500 estimate includes inmates who are within 60 days of their earliest possible release date and are not currently serving a sentence for a violent or sex crime. California narrowly defines violent crimes, but corrections officials are also ruling out the release of anyone serving time for domestic violence.

Local jails across the country have already been doing this. Santa Rita Jail in Dublin, Calif. has released about 400 inmates on early release.

Inmates who are otherwise eligible will also be screened for medical and mental health problems and to make sure they can properly be placed in the community, said corrections department spokeswoman Dana Simas.

“These are not guaranteed releases,” she said, since some of the 3,500 won’t meet all the criteria.

Releases could begin next week after the inmates are screened by parole officials.

Women sue Santa Rita over treatment; sheriff says it's the "best big jail in the nation"

The department also will transfer about 500 inmates who currently are in crowded dormitories, some stacked in bunk beds, to other areas like gymnasiums and vacant housing.

“We do not take these new measures lightly,” Corrections Secretary Ralph Diaz said in a statement. “However, in the face of a global pandemic, we must consider the risk of COVID-19 infection as a grave threat to safety, too.”

The new steps are mentioned in the state’s opposition to a push to have federal judges order the state to release thousands of inmates to avoid what advocates say is an impending catastrophic spread of coronavirus through a captive population.

Attorneys representing inmates will seek the early release order Thursday in a hearing before a special panel of three federal judges. Newsom’s administration argued in its court filing Tuesday that his administration already is acting responsibly and quickly and should be allowed to do its job without second-guessing from federal judges.

California officials “have already taken immediate, bold, and appropriate steps in response to this rapidly evolving crisis, and they are planning to take additional actions to expand their capacity with an intent to do more,” the filing said.

Piper Kerman, author of “Orange is the New Black: My Year in A Women’s Prison,” was among advocates and attorneys calling for more and quicker releases during an online news conference Tuesday.

“California’s prisons are the perfect environment for spreading the coronavirus,” she said.

But in his own celebrity turn, Newsom previewed the earlier paroles on The Daily Show with Trevor Noah‎ on Monday night.

“We’re doing it in a very thoughtful and judicious way, based upon public safety, not being flippant about this, not just saying, ‘Hey, you people, randomly, we’re going to send you home,’ but people that were already in the queue” for release, Newsom said.