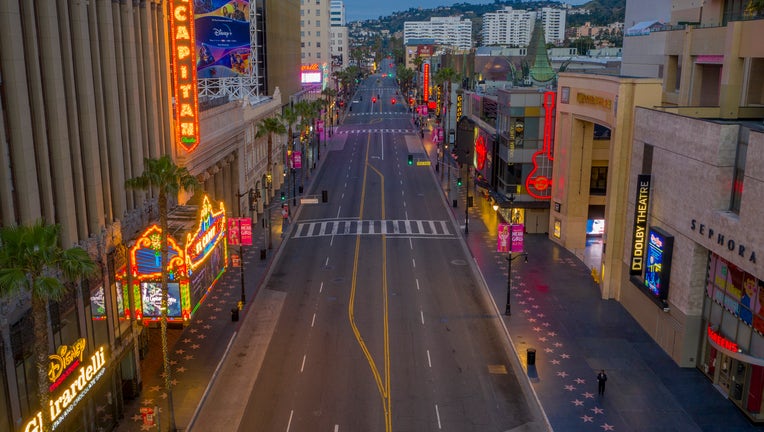 LOS ANGELES, CA - APRIL 19: An aerial view shows Hollywood Boulevard as coronavirus infections continue to spread throughout the region on April 19, 2020 in the Hollywood section of Los Angeles, California. As a result of the COVID-19 outbreak, only (Getty Images)

SACRAMENTO, Calif. (AP) - California’s 482 cities say they will collectively lose $6.7 billion over the next two years because of the coronavirus pandemic, prompting layoffs and furloughs for public workers and potential cuts to basic services such as sanitation, public safety and housing.

But that estimate, compiled by the League of California Cities, assumes the stay-at-home order lifts by June 1 — an unlikely scenario in a state where Gov. Gavin Newsom and public health officials have said bans on large gatherings and unnecessary travel will likely extend well into summer.

“Obviously, the longer the stay-at-home orders are in place, the longer businesses are closed, the greater the revenue shortfalls will be,” said Carolyn Coleman, the league’s executive director.

Cities large and small say they are feeling the pain of an abrupt economic halt as most businesses and restaurants have closed and people aren’t traveling because of the mandatory stay-at-home order.

In Yountville, a city of nearly 3,000 in California’s famed wine country where 74% of its annual budget comes from taxes on sales and hotel rooms, Mayor John Dunbar says a 60% loss in revenue is expected in the upcoming budget.

Rancho Cucamonga, a city of about 178,000 people east of Los Angeles, laid off its 289 part time workers. In San Jose, the 10th largest city in the country, leaders expect revenues to drop 8.6% — far larger than the 2.9% revenue loss during the Great Recession.

And in Grass Valley, a city of fewer than 13,000 people in the Sierra Nevada foothills, leaders have laid off four employees — and police and fire departments could be next.

“We are bare bones as it is,” Grass Valley Councilwoman Jan Arbuckle said. “If things continue down this path, we have no other choice other than to start looking at reducing our public safety, which is not what we want to do especially going into our fire season.”

Congress sent $5.8 billion to California local governments as part of a $2.2 trillion aid package, but most of that money went to counties. Only six California cities qualified because they had populations greater than 500,000 people: Fresno, Los Angeles, Sacramento, San Diego, San Francisco and San Jose.

But the federal government says cities can’t use that money to cover revenue shortfalls and can only use it for coronavirus-related expenses.

“It was nice to get a $92 million check,” Fresno Mayor Lee Brand said. “We have to go forward with our budget with the presumption it is not going to be there.”

The League of California Cities asked Newsom and the Legislature on Thursday to help cities cover those shortfalls. Newsom plans to unveil a budget proposal next month after scrapping the $222.2 billion spending plan he proposed in January.

For most people, the virus causes mild or moderate symptoms, such as fever and cough that clear up in two to three weeks. For some, especially older adults and people with existing health problems, it can cause more severe illness and death.

California has more than 39,000 coronavirus cases and more than 1,500 deaths, according to data compiled by Johns Hopkins University. The number of infections is thought to be far higher because many people have not been tested, and studies suggest people can be infected with the virus without feeling sick.

But the virus’ spread has been far less devastating in California than public health officials had feared. Wednesday, the state saw declines in the both the number of confirmed and suspected coronavirus hospitalizations for the first time.

With hospitals far from capacity, Newsom announced Wednesday they could resume elective surgeries. And Thursday, Newsom said 16 California-based doctors had volunteered to help in New York City, the center of the outbreak in the U.S.

Still, Newsom reiterated on Thursday it could be some time before he loosens the state’s stay-at-home order. He said if people were to pack beaches, parks, playgrounds and hiking trails this weekend, then “I’ll be announcing in a week or so these numbers going back up.”

“I don’t think anybody wants to hear that,” he said.

In a conference call with reporters on Thursday, Dunbar — who is also the president of the League of California Cities — said cities are anxious for businesses to reopen.

“But we are not going to rush that effort,” he said. “We all agree that public health and our public health officers are rightfully driving the timing as we move forward.”