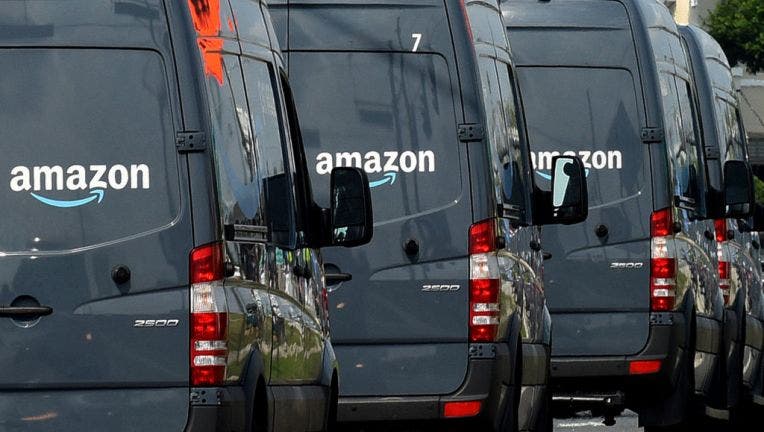 Amazon delivery vans are seen on May 14, 2019 in Orlando, Florida. (Photo by Paul Hennessy/NurPhoto via Getty Images)

SIMI VALLEY, Calif. - The driver of an Amazon delivery van was arrested on suspicion of DUI after two hit-and-run crashes that knocked down a light pole and smashed up a parked car in a Southern California neighborhood, authorities said.

Simi Valley police responded Thursday to reports of a city light pole down across a residential sidewalk, officials said.

Officers investigated reports that the pole was struck by an Amazon van that left the area, the Ventura County Star said.

A short time later the van returned to the neighborhood, hit a parked car and again left the scene, officials said. Police photos showed the impact knocked the car partially up onto the sidewalk.

Officers spotted the van nearby and arrested the driver, a 23-year-old Woodland Hills resident, the newspaper said.

The suspect wore an Amazon shirt, but it wasn’t immediately clear whether he was a contract or corporate employee, according to police Cmdr. Steve Shorts. The van had been rented from the vehicle-sharing service Fluid Truck, Shorts said.

The driver, who was found to be in possession of drug paraphernalia, was arrested on suspicion of hit-and-run and DUI, the department said.