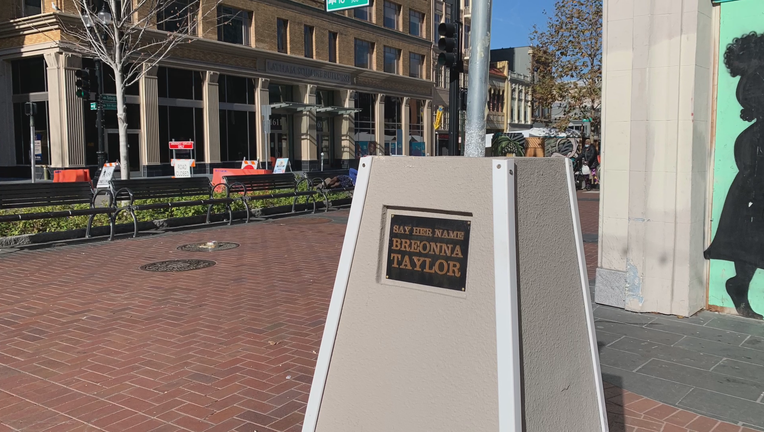 A weeks-old sculpted Breonna Taylor bust that was vandalized over the weekend was missing Tuesday.

OAKLAND, Calif. - A sculpture of Breonna Taylor that was vandalized just two weeks after being installed has now gone missing from its downtown Oakland location.

The ceramic statue memorializing Taylor in Latham Square plaza was damaged over the weekend, prompting outrage from the community and a police investigation. Artist Leo Carson, who was in the early stages of rebuilding his work, now fears it has been completely destroyed after the bust was removed either Monday night or Tuesday morning. 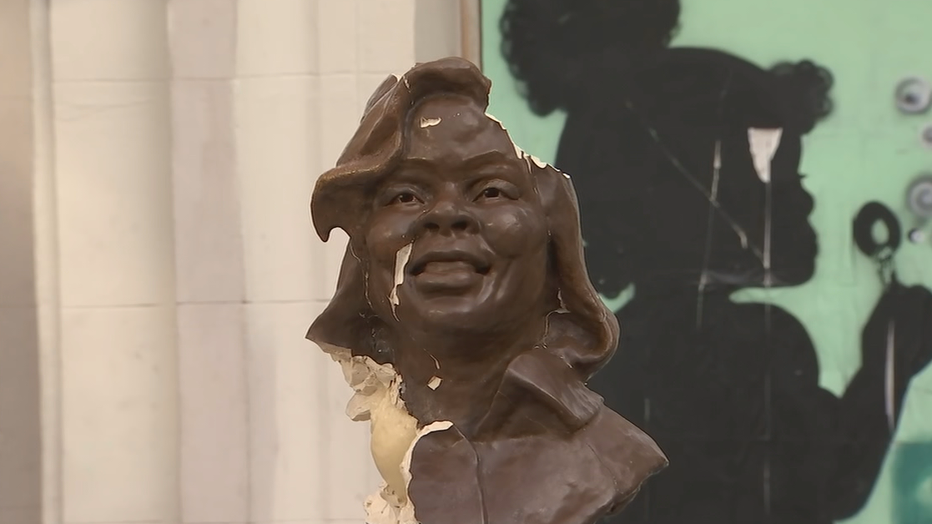 The damaged Breonna Taylor sculpture was seen in its downtown Oakland location Monday and by Tuesday it was gone.

Vandalizing the art, which had a plaque with the phrase "say her name" on the front, was seen as another blow for people still struggling with Taylor's death. The 26-year-old Black woman was killed by police officers in Louisville, Kentucky during a botched raid in March. Taylor's death, along with the police killing of George Floyd, sparked protests around the nation demanding racial justice.

Carson said he created the artwork and installed it on Dec. 12 to uplift supporters of the Black Lives Matter movement. The fundraiser set up by the Oakland artist surpassed its $5,000 goal in less than 24 hours and by Tuesday morning supporters had contributed over $20,000 to aid the rebuilding process. The new bust will be rebuilt in bronze, thanks to all the contributions.

Carson said any money left over will be donated to Taylor's family. He also asked one Bay Area attorney who offered to fund the rebuild to instead send money to her family, as the goal had already been reached.

Oakland Mayor Libby Schaaf denounced the vandalism in a Tweet Monday night and asked people to donate to the fundraiser if they can.

"It’s a vicious attack against the light and justice sought in Breonna Taylor’s name," the mayor wrote. "We will keep moving forward; Oakland will not tolerate acts of hatred. If you can, please support."

Carson said he will hold a rally at Latham Square at 3:30 p.m. on Tuesday, where he plans to pour concrete on the pedestal that supported the sculpture.

The Oakland Police Department confirmed they are investigating the latest incident and noted that the city did not approve the piece of art.

"The Oakland Police Department is investigating this latest incident regarding the bust honoring Breonna Taylor," said the department in a statement. "The sculpture was not a City-approved piece of public art, and the City encourages the artist, and all artists, to work with the City on public art installations."