Every June, the LGBTQ+ community and allies celebrate what has become

WASHINGTON - President Joe Biden voiced his support this week for two professional athletes who recently announced that they’re part of the LGBTQ community, saying he’s "so proud" of their courage to publicly share their identities.

"To Carl Nassib and Kumi Yokoyama — two prominent, inspiring athletes who came out this week: I'm so proud of your courage," Biden wrote on Twitter. "Because of you, countless kids around the world are seeing themselves in a new light today."

Nassib, a defensive end for the Las Vegas Raider, came out as gay this week in a lengthy social media post — becoming the first active NFL player to do so.

"I just want to take a quick moment to say that I’m gay," the 28-year-old said in a video. "I’ve been meaning to do this for a while now but I finally feel comfortable enough to get it off my chest."

Nassib also pledged to donate $100,000 to The Trevor Project. The organization works to prevent suicides among LGBTQ youth, who are almost five times as likely to have attempted suicide compared to heterosexual youth, data from the U.S. Centers for Disease Control and Prevention shows.

"I’m coming out now," Yokoyama said in the 19-minute video. "In the future, I want to quit soccer and live as a man."

Yokoyama, who played for Japan in the 2019 Women’s World Cup, said they felt more comfortable with their own gender identity while living in the United States, where teammates and friends are more open to gender and sexual diversity.

The Spirit also expressed the team’s support and pride in Yokoyama. "We support and are so proud of you Kumi. Thank you for showing the world it’s ok to embrace who you are!" the team tweeted, adding that the player uses they/them pronouns. 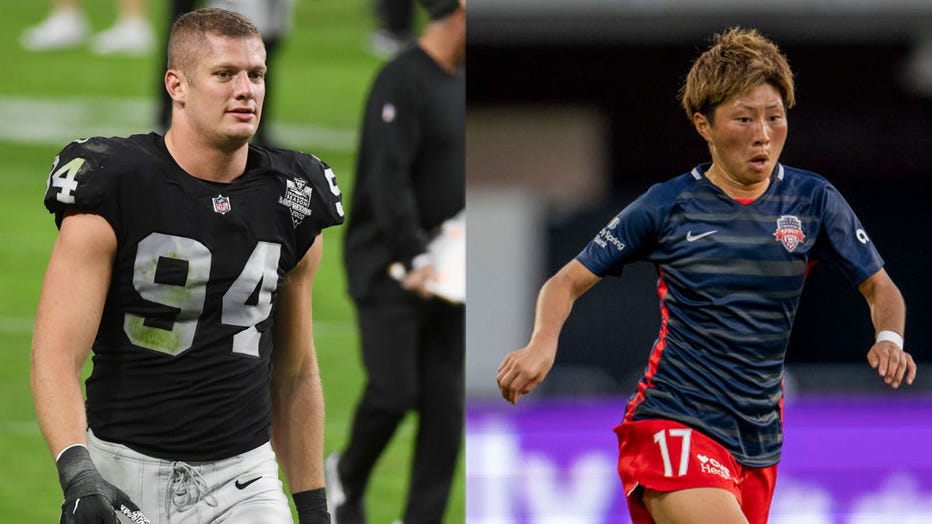 FILE IMAGES - (L) Defensive end Carl Nassib of the Las Vegas Raiders walks off the field after the Raiders defeated the Denver Broncos 37-12 at Allegiant Stadium on Nov. 15, 2020, in Las Vegas, Nevada. (R) Kumi Yokoyama of the Washington Spirit dribb

Support and awareness of gender and sexual diversity has slowly grown in Japan, but LGBTQ people lack many legal protections and often suffer discrimination, causing many to hide their sexual identities. An equality law pushed by rights groups was scrapped recently due to opposition from the conservative ruling party.

Transgender people in Japan also must have their reproductive organs removed to have their gender recognized on official documents — a requirement that human rights and medical groups criticize as inhuman and unnecessary and say should end.

In a society where the pressure for conformity is extremely high, disclosure of an LGBTQ sexual identity is rare, especially in sports, which rights activists say remains unfriendly to LGBTQ people because of its gender specificity.

Yokoyama said they weren’t enthusiastic about coming out but it was a choice made while thinking about the future and that it would be harder to live closeted. "I would not have come out in Japan," they said.

They thanked their teammates, friends and girlfriend for their support and courage.

Yokoyama played for Japan at the 2019 World Cup in France and moved from Japanese club AC Nagano Parceiro to the Washington Spirit.

The athletes' announcements and Biden’s tweet come during Pride Month, the 30 days in June dedicated to honoring the 1969 Stonewall riots, uplifting those in the LGBTQ community and working to achieve equal justice and opportunities.

In June of 1969, patrons and supporters of a popular gay bar in New York City, called the Stonewall Inn, staged an uprising during a routine police raid, according to the NYC LGBT Historic Sites Project. The days-long conflict marked the beginning of a modern movement to outlaw discriminatory laws and practices against LGBTQ Americans.

At the start of the month, Biden officially declared June 2021 as "Lesbian, Gay, Bisexual, Transgender, and Queer Pride Month" after signing a proclamation.

"The LGBTQ+ community in America has achieved remarkable progress since Stonewall," he said in a statement. "Historic Supreme Court rulings in recent years have struck down regressive laws, affirmed the right to marriage equality, and secured workplace protections for LGBTQ+ individuals in every State and Territory."

The president has also highlighted several of his recent accomplishments related to LGBTQ rights, including signing an executive order charging federal agencies to enforce laws that prohibit discrimination on the basis of gender identity or sexual orientation.

"While I am proud of the progress my Administration has made in advancing protections for the LGBTQ+ community, I will not rest until full equality for LGBTQ+ Americans is finally achieved and codified into law," Biden said.

The Associated Press contributed to this report. This story was reported from Cincinnati.