A bear invaded a California home with the owners still inside and raided the pantry and freezer before fleeing.

NEVADA CITY, Calif. - Terrifying video shows a bear invading a California family’s kitchen and pantry while the owners were still at home on June 28.

Alan Aragon, the homeowner and the person who recorded the video, said he woke up that morning and walked out of his bedroom, only to be met by a bear.

Aragon said he "was in shock and terrified" when he first saw the furry intruder, but after some time passed and he saw the bear was only interested in what was in the freezer and pantry, he relaxed a little. 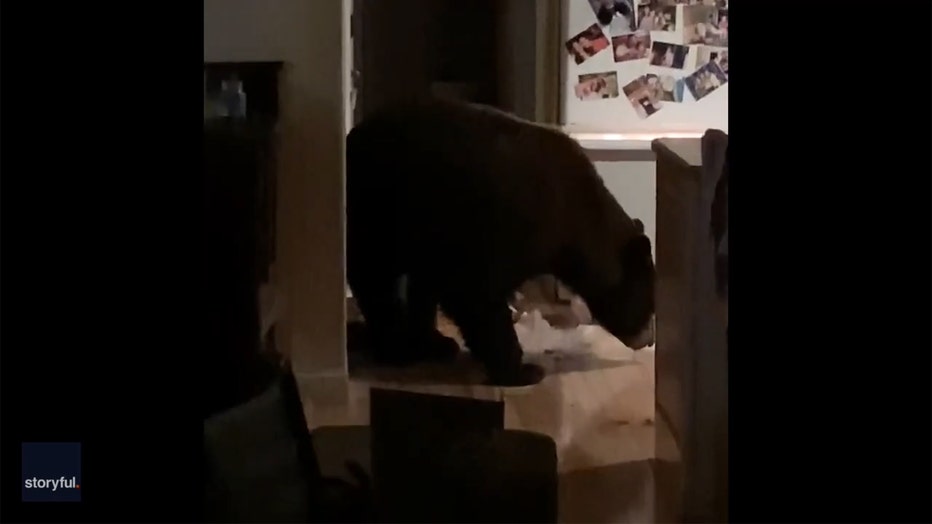 RELATED: Raccoon gets stuck escaping attic through little hole before dropping to the ground

Video shared by Aragon shows the bear lingering in the kitchen. While it did seem to notice Aragon and his wife were just across the living room, the bear ignored them and continued to explore its surroundings.

As Aragon and his wife hid in another room of their home, the bear walked around and sniffed a few picture frames and explored only its immediate surroundings before returning to the kitchen.

The bear managed to open the bottom freezer drawer of the fridge and munched on whatever it found. Aragon’s wife can be heard in the background of the video calling authorities.

At one point during the video, the bear turned around and almost appeared to be staring back at Aragon as he recorded the animal.

As the bear got closer to the exit, Aragon can be heard making a few loud banging noises, telling the bear to "go on."

Aragon then followed the bear out to what appeared to be the back patio as the bear descended the stairs and sauntered off.

"He took what he wanted out of the pantry," Aragon said. "Opened up the freezer and ate. Once the bear left he was gone. Haven’t seen him since."