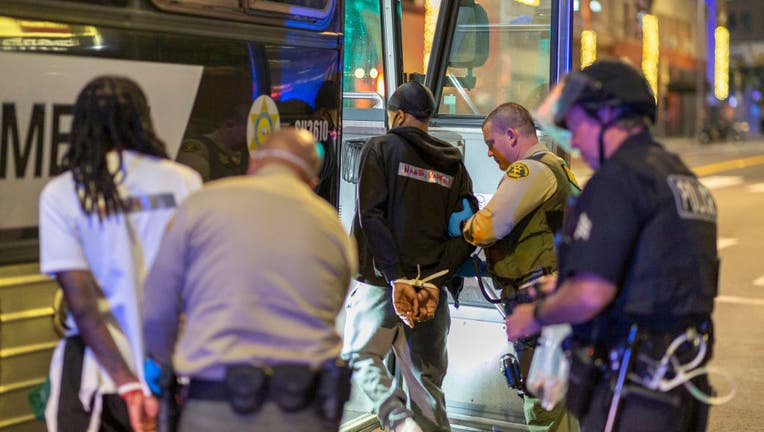 LOS ANGELES, CALIFORNIA - JUNE 02: Arrestees are loaded onto a sheriffs bus to be taken to jail as large numbers of people are arrested after a curfew went into effect during demonstrations over the death of George Floyd on June 02, 2020 in the Holly

LOS ANGELES - A curfew expired in all of Los Angeles County at 6 a.m. Tuesday in response to days of looting and civil unrest following the in-custody death of George Floyd by Minneapolis police, prompting the deployment of California National Guard troops in Los Angeles, Long Beach, Lakewood and Santa Monica.

At least three nonviolent protests took place in Hollywood Monday with thousands of people who marched west along Hollywood Boulevard, chanting and carrying signs, including a lead banner with the words, "Say their names," in reference to victims of police shootings. The group marched in a circular pattern, eventually moving south to Sunset Boulevard and then back east.

Several people were arrested for unlawful assembly in Hollywood, and many of them waited in the 6100 block of Sunset Boulevard, near Gower Street, to be taken away by a sheriff's department bus. Others were detained near Selma and Ivar avenues.

Around 6 p.m., a band of looters stormed the Rite Aid at 6130 Sunset Blvd., in Hollywood's Gower Gulch Plaza strip mall, and other businesses in the plaza had their windows shattered. 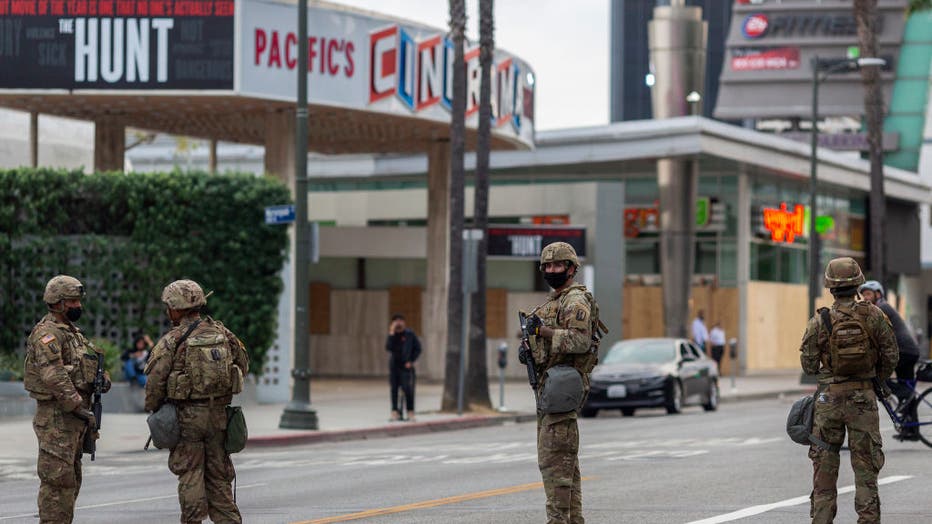 LOS ANGELES, CALIFORNIA - JUNE 01: Police occupy Sunset Boulevard as large numbers of people are arrested after a curfew went into effect during demonstrations over the death of George Floyd on June 1, 2020 in the Hollywood section of Los Angeles, Ca

Up to 400 people were arrested in Hollywood Monday and four Los Angeles police officers were hurt.

At least 19 vehicles were impounded in connection with looting and protests in Hollywood, it was reported.

Dozens of looters poured out of a Boost Mobile store on Van Nuys Boulevard late Monday afternoon, just blocks away from a peaceful protest that required the attention of police in the area.

Looters raided a marijuana dispensary and pharmacy. At each scene, windows were shattered and glass littered the sidewalks. Dozens more looters were arrested for burglary after ransacking a Walgreens at Van Nuys and Sherman Way, in Van Nuys, and police said many of them were armed with hammers. The Los Angeles Police Department did not immediately announce the number of arrests.

The primary Van Nuys protest -- and most other gatherings Monday afternoon -- were conducted without violence. The crowd in Van Nuys occasionally spilled onto streets, until a discussion was held with officers on the scene and demonstrators moved back to sidewalks. Dozens of officers responded with an armada of police SUVs parading into the neighborhood.

Late Monday afternoon, police spotted a group of suspected looters in a dark Dodge Charger, prompting a police pursuit that eventually fizzled as the driver navigated recklessly through Van Nuys streets. There would be more car chases for law enforcement that followed.

Some protesters in Westwood were arrested outside Los Angeles County Club in Holmby Hills.

On the outskirts of West Hollywood, LAPD Cmdr. Cory Palka spoke to the crowd and dropped to a knee in a sign of solidarity with the congregants, which cheered in response.

The demonstrators assured Palka they would disperse peacefully when the countywide curfew took effect at 6 p.m. Well before them, many people had already started walking away.

City and county authorities hailed the generally peaceful posture of the vast majority of people protesting the death of Floyd, and attributed the waves of destruction that occurred to "opportunists" taking advantage of demonstrations to loot and vandalize.

"Where are we today in Santa Monica? Today, we are rebuilding," Santa Monica Mayor Pro Tem Terry O'Day told a crowd at the Santa Monica Pier Monday morning. "We are not defeated. ... Today, we show the nation what a community means and why it matters."

A countywide curfew was imposed Sunday in Los Angeles from 6 p.m to 6 a.m. Monday after the violence and looting in Santa Monica and Long Beach. That curfew was imposed again on Monday for the entire county and city of Los Angeles. Several cities issued modified curfews of their own, with citywide curfews taking effect early afternoon in places such as Santa Monica, Beverly Hills and West Hollywood.

Beverly Hills had been hard-hit Saturday along with L.A.'s Fairfax District.

Roughly 1,000 National Guard personnel were deployed to the area over the weekend after Gov. Gavin Newsom declared a state of emergency Saturday for all of Los Angeles County. Troops were seen in front of Los Angeles City Hall, outside the Lakewood Center and were assigned to locations in Long Beach and Santa Monica.

At least 2,000 troops were expected in to be deployed in Los Angeles Tuesday, LAPD Chief Michel Moore said.

Other demonstrations were scheduled for later today, including Black Lives Matter Los Angeles attending the Los Angeles Police Commission Meeting via Zoom and teleconference for public comment on the alleged use of force and violence on protesters. The meeting is scheduled to begin at 9:30 a.m.