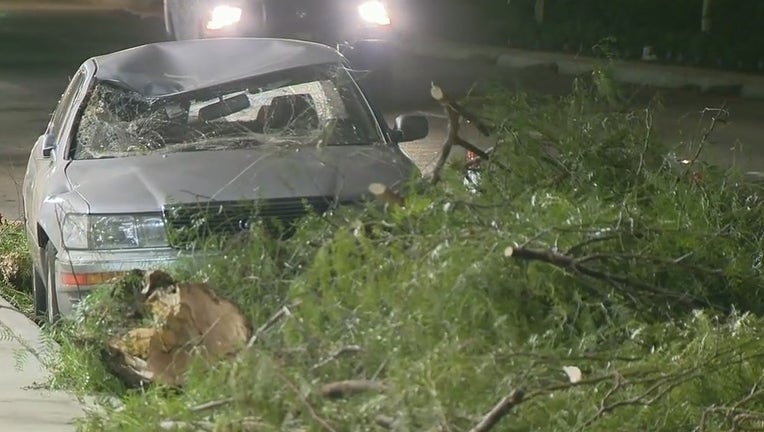 LOS ANGELES - Another day of strong winds was expected across the Southland on Wednesday after ferocious Santa Anas battered mountain and valley areas the day before.

A red flag warning for extreme fire danger expired Tuesday night, but elevated to brief critical fire conditions were still possible Wednesday due to continued strong and gusty offshore winds, according to the National Weather Service.

A high wind warning was also in effect until 6 p.m. Wednesday for Orange County coastal areas, and until 10 p.m. for inland Orange County.

The winds should become weaker by nightfall, with those numbers dropping by 15 to 20 mph, the NWS said.

On Tuesday, the NWS recorded gusts topping 86 mph in some mountain areas, including Warm Springs and the Magic Mountain Truck Trail in northern Los Angeles County.

Other parts of the Santa Clarita Valley were hit with gusts topping 40 and 50 mph, as were select areas of the San Fernando Valley. Winds were also recorded near 50 mph in the Antelope Valley.

The Los Angeles County and city fire departments were prepared up for the wind event, pre deploying resources in critically endangered areas prior to Tuesday. The Los Angeles Fire Department stationed three task forces in the valleys, while the county fire department ordered "additional staffing and pre-deployment of resources throughout the county."

The county's Office of Emergency Management issued a statement Monday saying the agency will be on "high alert" due to the wind and fire conditions. The agency's director, Kevin McGowan, urged residents to be prepared for dangerous conditions.

"Our emergency response officials are world-class and will stand ready to defend lives and property," he said. "But, we need collaboration from all residents who live in L.A. County to stay safe as a region. We must all do our part by staying informed and being ready to evacuate at a moment's notice, especially if you live in canyon, mountain or foothill communities."

He urged residents to have an evacuation plan in place and be prepared by taking steps such as parking vehicles facing the street and on driveways -- not in garages that may not be accessible if electric garage-door openers become inoperable in an outage.

A few fires broke out Tuesday, including one in the Santa Clarita area that blackened 167 acres and a wind-driven brush fire near the westbound 10 Freeway in the San Dimas area that burned about 40 acres.

The high winds also prompted Southern California Edison to impose public safety power shutoffs, in which electricity is turned off for customers in wind-prone areas to prevent the possibility of downed power lines sparking wildfires.

A map of the utility's PSPS activity is available at www.sce.com/wildfire/psps.

The strong winds were accompanied by mild temperatures, with highs in the 60s and lower 70s, and the 50s in the mountains and high desert.

A cold weather alert was issued for the Antelope Valley through Friday. The Los Angeles County Department of Public Health said below-freezing temperatures were expected overnight, and warned that "children, the elderly, and people with disabilities or special medical needs are especially vulnerable during cold weather. Extra precaution should be taken to ensure they don't get too cold when they are outside."

Residents were also warned not to leave pets outside at night.

Rain is expected to arrive in the Southland on Saturday, then clear out Sunday before a more sustained rainstorm Monday through Wednesday, when temperatures will drop into the 50s.