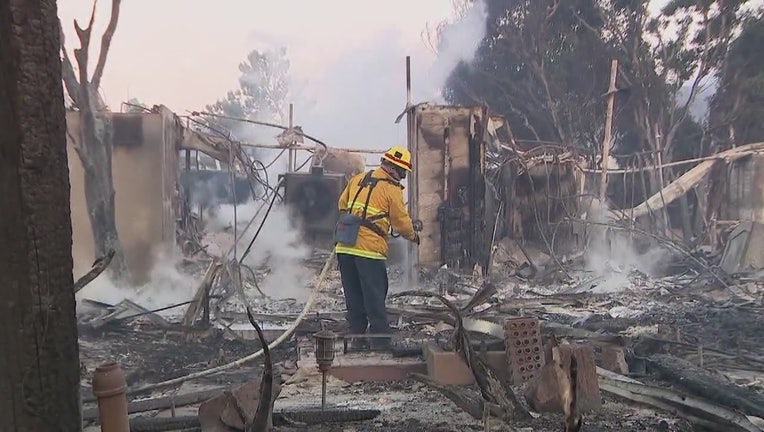 Mandatory evacuations on more than 7,000 homes in the Getty Fire zone are still place but some orders have been lifted. The biggest concern right now is the heavy winds, with the National Weather Service issuing what they call an unprecedented "extreme" Red Flag Warning.

Mayor Eric Garcetti announced on Wednesday afternoon that all evacuation orders for the Getty Fire have been lifted with the exception of these areas:

The fire has burned approximately 745 acres and was 66% contained by Friday morning. Twelve homes were destroyed by the blaze, officials said.

L.A. Mayor Eric Garcetti announced that a tree branch landing across powerlines sparked the Getty Fire. The mayor said wind blew the dry tree branch from a Eucalyptus tree directly in the path of the powerlines causing sparks and called the event "an act of God."

'LADWP has been working closely with LAFD investigators to inspect electrical equipment that was believed to have been struck by a dried tree branch near the location where the Getty Fire is suspected to have started. Based on the investigation, LAFD has stated that the fire was likely caused by a tree branch that broke off during the high wind conditions and landed on nearby power lines, which resulted in arcing and sparking that ignited nearby brush.

Investigators are working to determine the ownership of the land occupied by the tree. During the preliminary investigation, a dried Eucalyptus branch was found by investigators hanging from telecommunications lines located below LADWP power lines near 1901 N. Sepulveda Boulevard. The branch is believed to have blown into LADWP wires from a tree located approximately 30 feet from the utility lines. This distance is outside of the vegetation clearance and setback distance required by state regulations. Based upon inspection of the location, there was no failure of electrical equipment involved. All wires and equipment, including the pole, remain fully intact.

Additionally, LADWP completed vegetation management inspection and trimming in this area of the City on July 10, 2019, having trimmed 248 trees in the vicinity to protect the public’s safety and to prevent power outages. Our water and power crew members remain hard at work supporting ongoing fire operations with personnel in the area to ensure adequate water supply to aid in firefighting and coordination of power restoration in areas damaged by the fire. During any fire, our power system staff coordinates closely with firefighters to cut power flow as needed to ensure fire personnel safety and the safety of our customers and they will continue to do.LADWP’s electric distribution system has 6,763 miles of overhead distribution lines and 3,732 miles of underground cables. These lines deliver power to customers from 177 electrical substations located across the City.

As part of maintaining this infrastructure, LADWP has an aggressive vegetation management program. Each year, our crews inspect overhead power lines and ensure that tree branches and other vegetation are clear of electrical equipment to protect against fire and power outages. Properly maintaining our power infrastructure is what allows LADWP to continue providing safe and reliable power to our customers, but as with any other electrical distribution system, power lines can be impacted by anything that makes contact with them – whether it is a tree branch, a palm frond, an animal, or a Mylar balloon. Auto accidents also frequently impact our equipment and have resulted in fires in the past, regardless of wind conditions. In most instances, these events go unnoticed beyond the immediate area; resulting in a localized power outage.' 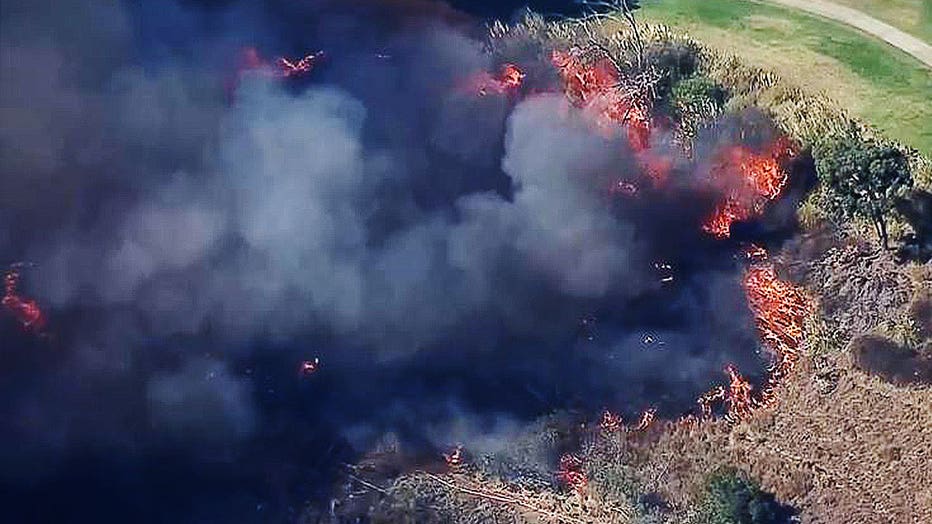 • Repopulation has begun for the community of Mountaingate. Residents will be permitted to enter the area with a valid ID. The Mountaingate community will remain under voluntary evacuation.

All mandatory evacuation orders and warnings have been lifted as of 10 a.m. November 1.

Residents in the following areas are allowed to return to their homes and will be required to provide identification and proof of residence:

Tips for returning home after an evacuation 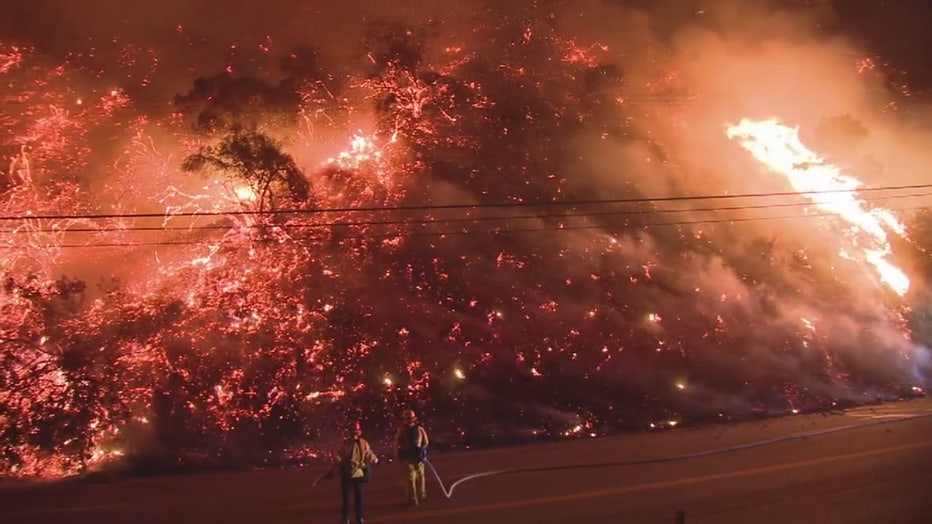 Firefighters battle the fast-moving embers on the hillside along the 405 Freeway as the Getty Fire threatens thousands of residents in Los Angeles. October 28, 2019. (Photo credit: FOX 11 Los Angeles)

That stretch of the 405 was closed around 8:15 a.m. Monday, according to the California Highway Patrol.

Just before 9 a.m., the CHP closed the Pacific Coast Highway at Temescal Cyn Rd. traffic was being diverted north on Temescal. It reopened just before 11 a.m.

Several Los Angeles area schools were closed Monday due to the wildfire that erupted in the overnight hours near the Getty Center. All schools closed Monday will also be closed on Tuesday. Click here for a full list.

At 5 a.m, at least 2,600 LADWP customers were without power due to the Getty Fire. By 7:15 a.m., that number decreased to 900 customers. The outage was impacting residents in the Bel Air, Westwood and Brentwood neighborhoods.

"Our water and power crews are in the area ensuring adequate water supply and firefighter support and safety near power lines," LADWP said in a tweet.

They are also considering shutting off power to more than 200,000 customers as a precaution due to the high winds. PSPS's occur when forecasts indicate elevated weather conditions. Power companies assess the impact to affected areas, analyze historical data to help predict the likelihood of a wildfire occurring, and closely monitor weather watch alerts from NWS prior to shutting off the power. 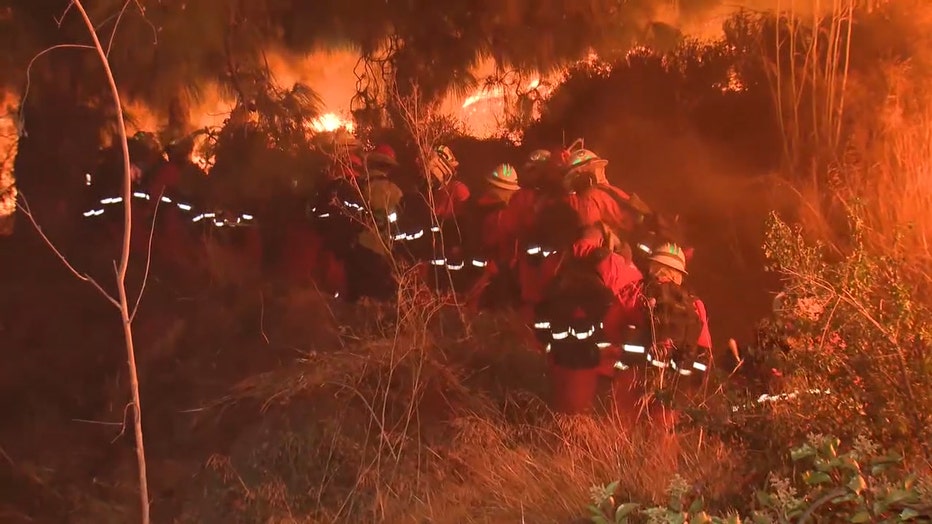 More than 500 firefighters were battling flames that broke out near the 405 Freeway through the Santa Monica Mountains in Los Angeles, officials said. (Photo credit: FOX 11 Los Angeles)

• Reading for "The Merchant of Venice" featuring Al Pacino and Geoffrey Rush has been relocated from American Jewish University to the Walt Disney Concert Hall located at 111 S. Grand Avenue in downtown L.A. The event is a benefit for the Shakespeare Center of Los Angeles.

Fire officials described the inferno as "very dynamic, moving in a westward direction driven by high winds." The National Weather Service said that winds of up to 66 mph were reported in the area.

Los Angeles Mayor Eric Garcetti signed an emergency declaration in the county just before 7 a.m. in order to provide additional resources to support firefighters and first responders battling the blaze.

Additionally, California Gov. Gavin Newsom announced from a press conference in Sacramento Monday afternoon that the state has secured a Fire Management Assistance Grant from the Federal Emergency Management Agency to help ensure the availability of resources to fight the Getty Fire.

Newsom also declared a statewide emergency due to the dangerous weather conditions, which have resulted in fires and evacuations across the state.

While the cause of the fire remained under investigation, during a press conference Monday afternoon, Garcetti said that there was an active arson investigation, adding that the fire was not the result of a homeless encampment or any activity by homeless people in the area.

LAFD Chief Ralph Terrazas confirmed that crews have identified the fire's point of origin just off the 405 Freeway near Sepulveda Boulevard. 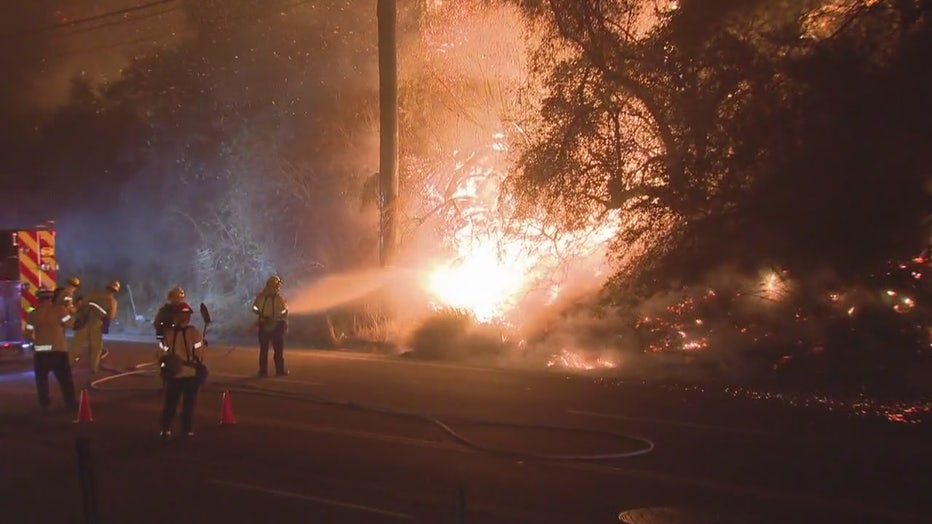 Firefighters battle the fast-moving embers on the hillside along the 405 Freeway as the Getty Fire threatens thousands of residents in Los Angeles. October 28, 2019. (Photo credit: FOX 11 Los Angeles)

The fire was first reported by a witness who called 911 at 1:32 a.m. Monday stating that a fire started on the hillside close to the freeway with a possible power line on fire, authorities said during a Monday morning press conference.

At around 2:45 a.m., the Los Angeles Fire Department sent L.A. residents messages on their cell phones. It said: "Emergency Alert. Prepare to evacuate due to fire near the Getty going W. More info: lafd.org/alerts.'' A subsequent message included orders to actually evacuate.

"This is a very dynamic situation due to high winds and information is quickly developing. Stay vigilant,'' LAFD spokeswoman Margaret Stewart wrote on Twitter.

The nearby Getty Center, a 110-acre campus of the Getty Museum and other programs of the Getty Trust which houses artwork from the middle ages to the 20th century, was not impacted by the fire. Officials said on Twitter that the center “remains safe” with the fire to the north and west of the campus. 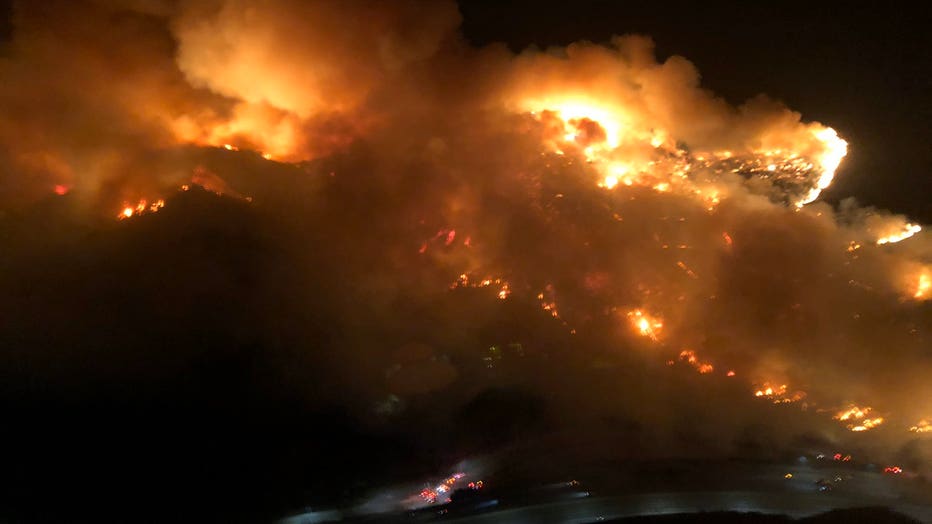 Images from FOX 11 reporters showed several homes burned along the path of the fire. A majority of the homes that were damaged or destroyed were on Tigertrail Road in Brentwood.

Authorities said they believed that the fire would be burning for a few days before it would be contained.