SANTA CLARITA, Calif. - The mother of a 7-year-old boy is speaking out after her son was falsely accused of felony possession of a weapon at school and later detained and questioned without a parent present.

Thea Marie Perkins said that her son, Solomon, was recently accused by another student of having a gun in his backpack while at Tesoro Del Valle Elementary School in Valencia. 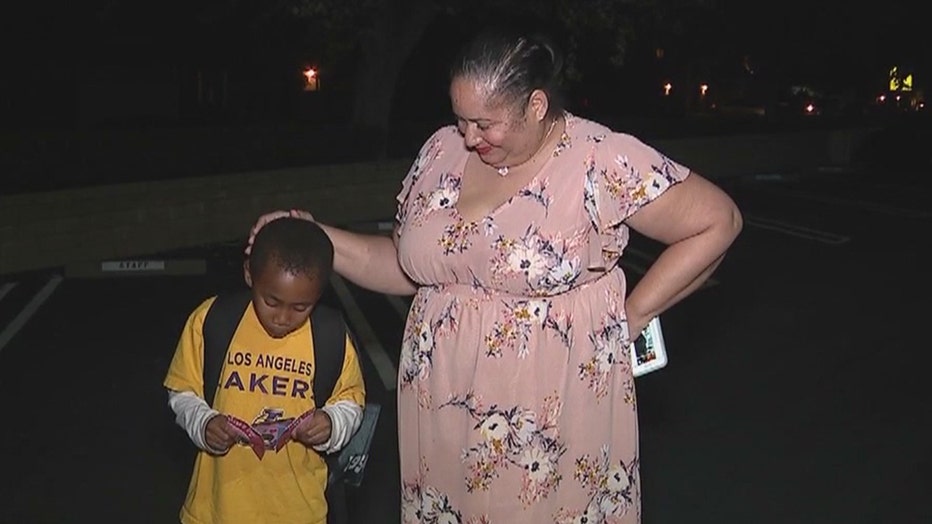 Solomon said he didn’t know why another student said that he had a gun and when an administrator searched his backpack, no gun was found.

“They checked his backpack and saw that he had over 20 or so Valentine's Day cards that he was going to give to his friends,” Perkins said.

Despite finding no gun, school administrators called the Santa Clarita Valley Sheriff’s Station to investigate. However, no one called Solomon’s mother.

Perkins said that by the time she was called, the sheriff's department and administrators had already violated both her and her sons' civil rights.

“She didn’t call one sheriff… there were six sheriff’s department officers that showed up,” Perkins told FOX 11 reporter Gina Silva. “Three squad cars, not cars but trucks, when I arrived.”

Perkins said her son was interrogated by sheriff’s deputies without a parent present and that, to her, is unacceptable.

“This district has criminalized a 7-year-old African American child and I am absolutely angry,” Perkins said. “There’s really no reason for that after there was evidence that the accusation that was made was false.”

Following the incident, the school's principal sent an email to parents stating: "As many of you may be aware we have had law enforcement on campus today. All of our students are safe and the school day is progressing as normal."

Perkins said she was shocked that the principal didn't even acknowledge the fact that the accusation was false.

She's concerned that when Solomon returns to school, other students will treat him differently and might still think that he has a weapon. She told FOX 11 that she requested that a statement be sent out to the community clarifying that the allegations made against her son were not true.

FOX 11 reached out to Tesoro Del Valle Elementary School and the Saugus Union School District but they did not return our repeated phone calls and emails.

"During their investigation, the deputies determined a 7-year-old male student had allegedly made ‘specific threats’ about possibly engaging in a school shooting. The responding deputies made contact with the student and enlisted additional resources to evaluate his emotional and mental wellness. Not only did the deputies have a duty to protect the other children present at the school, but we're also obligated to ensure the safety of the student involved.”

Perkins disagrees with the way it was handled. She believes her son was treated differently because he’s African American.

“I really feel as though African American boys are an endangered species in the United States of America that hurts my heart,” said Perkins. “Why would she call a sheriff after she looked in his backpack and saw that it was a false accusation? Why?”

FOX 11 asked Civil Rights Attorney, Leo Terrell to assess this case. He said, “Parents should be concerned that their kids, a minor 7 or 8, would be investigated without parents involvement. But the balancing act to that, the counter-argument, is very simple — we’re talking about a threat that would affect many other parents and many other parents would ask a very simple question: Why not call in the authorities? So there’s a balancing test — some parents would get upset, others would be satisfied that they did a complete, thorough job. The kid was released, no harm, no foul, and everyone can walk away without being injured.”