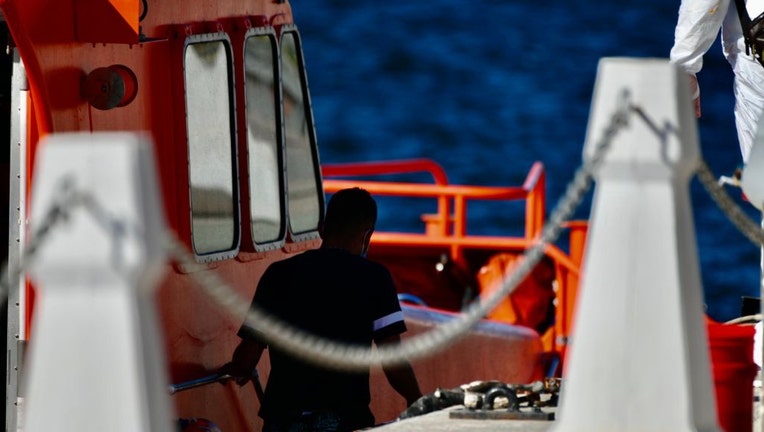 A rescue boat is pictured after two young men were rescued in Spain in 2021. (Photo By Antonio Sempere/Europa Press via Getty Images)

Emergency services on Spain's Canary Islands say 319 people, including 59 women and 24 children, were rescued from seven different boats trying to reach the archipelago in the Atlantic Ocean, while activists say at least 18 migrants have died.

Spanish rescue vessels reached the boats in different locations late Tuesday and early Wednesday, a Maritime Rescue Service spokeswoman told The Associated Press, adding that rescuers didn't find any bodies on or near the boats.

Walking Borders, a non-governmental organization working with migrants in the region that is often contacted by people in distress or their relatives, said at least 18 people traveling on one of the boats had died.

"Rescue means were activated too late, despite having the boat's location," Helena Maleno, the NGO's founder, wrote in a tweet.

The maritime rescue service spokeswoman, who was not authorized to be named in media reports, said during one of the operations late Tuesday, rescuers found nine people clinging to a capsized boat 45 nautical miles off the island of Lanzarote, but that no bodies or people adrift were found. She said the rescue boat had to tend another distress call immediately after.

The archipelago's emergency service, 112, said that nine adults and one baby among the 319 survivors were transferred to local health facilities on Lanzarote and Gran Canaria, another nearby island.

Most of the rescued were believed to be from northern and central Africa, which at the closest point is only 100 kilometers (60 miles) east of the Spanish islands.

Migrant rescues, boat arrivals and tragedies involving drowning or dehydration at sea are almost constant on this dangerous migration route favored by many Africans fleeing violence or poverty. Official figures show that more than 22,000 migrants arrived in the Canary Islands last year, roughly half of the total arrivals by sea recorded by Spain.

At least 384 died in 2021 trying in the Western Mediterranean route to the Spanish mainland or its islands, according to the International Organization for Migration.

But Walking Borders, which gathers testimonies from survivors and victims' relatives, says because boats are often not found and bodies never retrieved, the more accurate estimation is 4,404 deaths in 2021.